The International Table Tennis Federation (ITTF) is offering a media internship for young media professionals to join the ITTF Media team at the upcoming Liebherr 2019 World Table Tennis Championships to be held between 21-28 April 2019 in Budapest, Hungary. 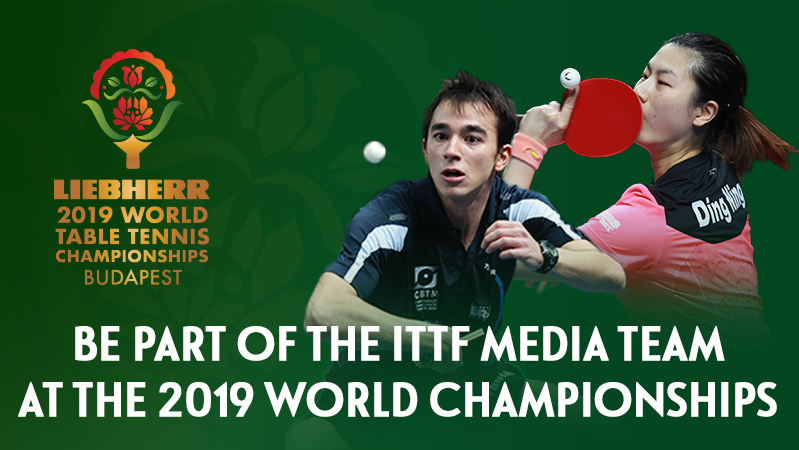 The candidate will be given full access to all media facilities and players, as a full member of the ITTF media team, which will provide a once-in-a-lifetime opportunity to gain valuable experience at one of the world’s biggest sports events, working for an International Federation.

Candidate
The ITTF is looking for university undergraduates or recent graduates in the fields of media, journalism, broadcast, film or sports management (or equivalent), who have a strong interest in sports, table tennis and large sporting events.

The candidate must have a strong command of English (spoken & written). Additional languages are a plus.

The candidate must also be comfortable completing the following tasks:

The Liebherr 2019 World Table Tennis Championships is set to be the most followed table tennis event in history with immense amount of interest from local and international media, as well as millions of fans worldwide.

Working Conditions and Accommodation
The ITTF offers hospitality and accommodation on site in an official hotel of the Liebherr 2019 World Table Tennis Championships, as well as full airfare contribution for the media intern.

Deadline
All applications should be sent to the ITTF before 15 March 2019. Late submissions will not be accepted.

If you have any questions, please contact ITTF Promotions Manager Caifeng Yang at [email protected].