Winners of both the Boys’ Team and Girls’ Team events on the fourth day of action; on the concluding day, Qian Tianyi donned the Girls’ Singles crown, the success coming after Xu Haidong had partnered Xiang Peng to Boys’ Doubles victory and Shi Xunyao had joined forces with Xu Yingbin to claim Mixed Doubles gold. One match later Shi Xunyao returned to action to reserve the top step of the Girls’ Doubles podium in unison with Huang Fanzhen.

The no.4 seed, Xu Haidong secured the title at the final expense of Japan’s Yukiya Uda, the no.9 seed (13-11, 11-4, 8-11, 11-9, 11-8) and thus, in an age when the shake-hands grip is overwhelmingly dominant, a pen-hold grip player had claimed the top prize for the second consecutive year. In Riva del Garda Xue Fei had been crowned champion beating Sweden’s Truls Moregard in the final, the player who had caused the downfall of Xu Haidong.

A repeat of one year ago and for Qian Tianyi a repeat of the success enjoyed earlier this year on the afternoon of Saturday 18th August at the 2018 Asian Junior and Cadet Championships in Myanmar. On that occasion, in the Junior Girls’ Singles final, Qian Tianyi had beaten Shi Xunyao in five games, in Bendigo, the contest was much closer, she needed the full seven games to secure victory (11-8, 5-11, 9-11, 11-5, 9-11, 11-9, 11-8). 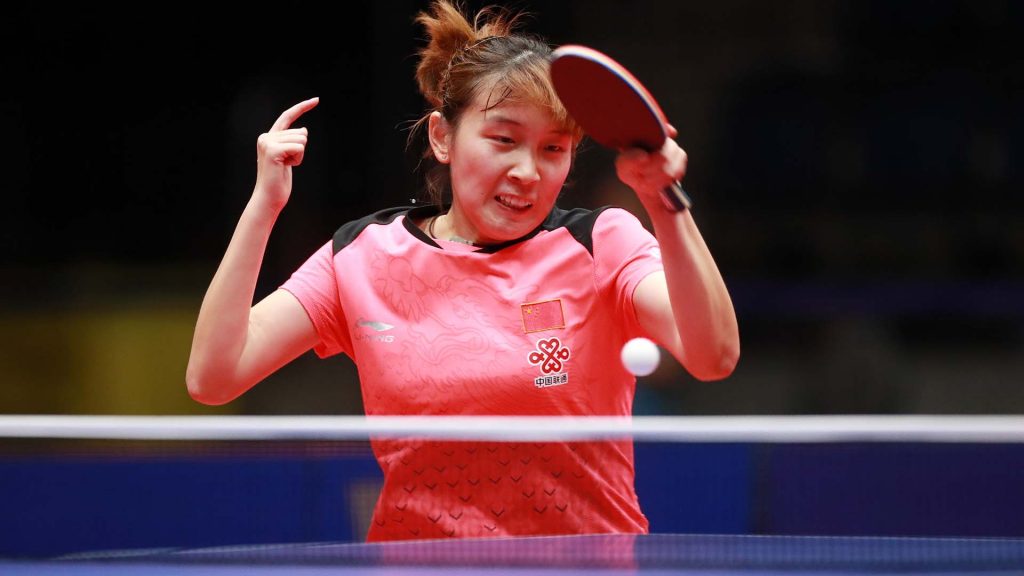 Success for Qian Tianyi, the second seed and two steps higher than last year, in Riva del Garda she had been beaten at the semi-final stage by colleague, Sun Yingsha, the champion elect; for Shi Xunyao, the top seed, the performance far outweighed last year. In the Italian resort, she had suffered a second round defeat at the hands of Spain’s Zhang Xuan. However, it did not match her efforts of 2016 in Cape Town when she had beaten Hong Kong’s Mak Tze Wing in the final to claim the title. 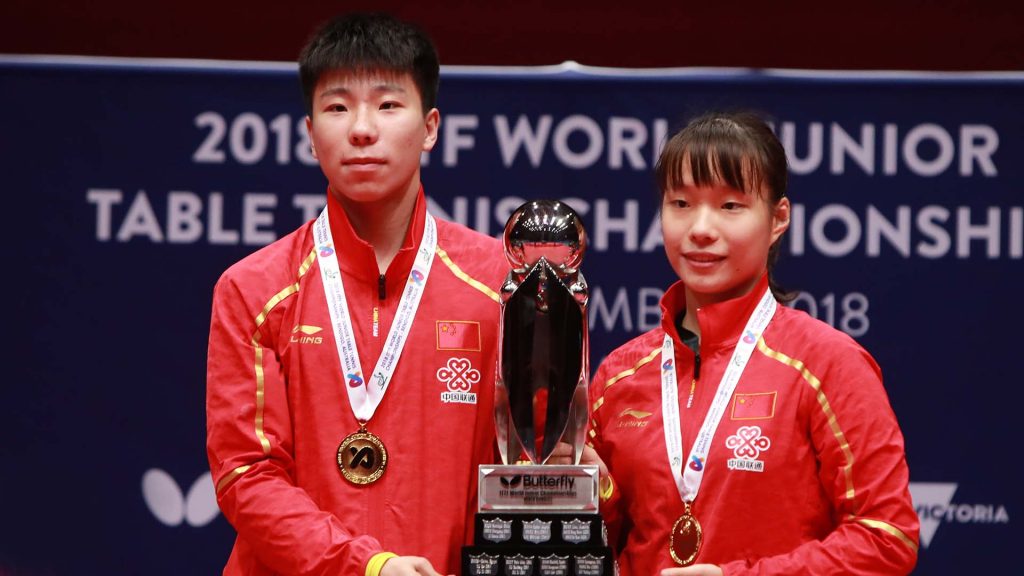 Silver for Shi Xunyao, earlier in the day partnering Xu Yingbin, the no.5 seeds, an all Chinese final had witnessed Mixed Doubles success in opposition to Yu Heyi and Qian Tianyi, the no.4 seeds (11-8, 3-11, 11-5, 9-11, 11-5); the win coming before joining forces with Huang Fenzhen to secure Girls’ Doubles gold. 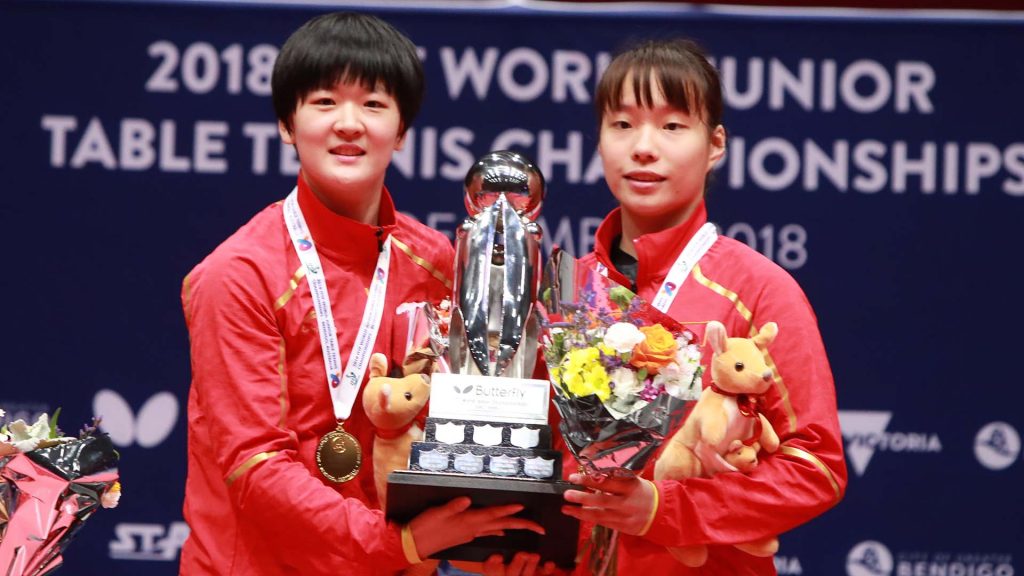 Overall three titles for Shi Xunyao, for Xu Haidong it was exactly the same number, prior to closing the curtain on proceedings, he had partnered Xiang Peng to Boys’ Doubles success; at the final hurdle they had beaten Russia’s Maksim Grebnev and Lev Katsman (11-9, 11-8, 11-3).

Defeat for Maksim Grebnev and Lev Katsman but they could depart Australia with heads held high, they had far exceeded expectations and had represented both their country and Europe with distinction; they had commenced play, the no.14 seeds. 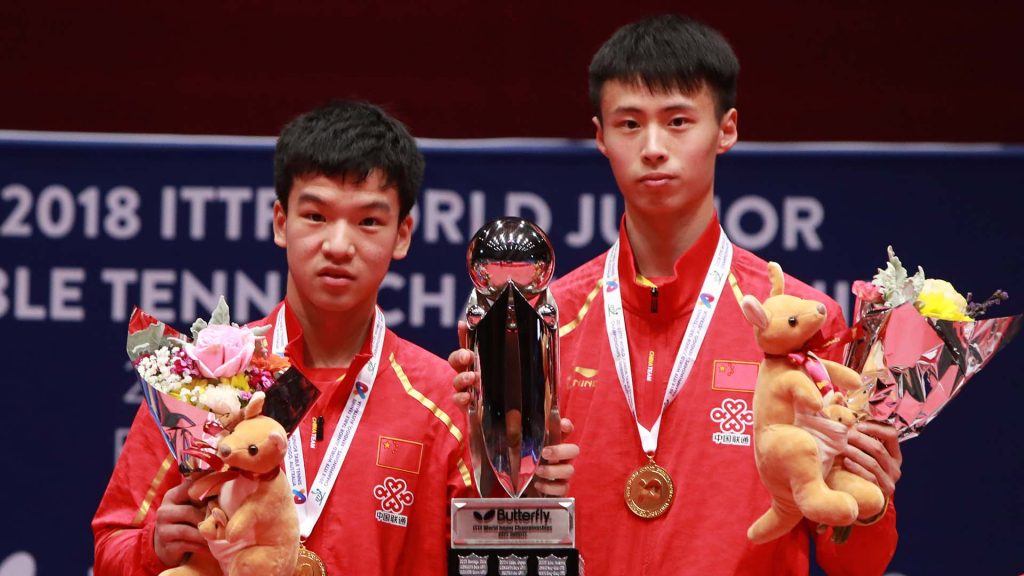 Notably for China it was the magnificent seven; it is the seventh occasion at a World Junior Championships when all seven titles have finished in Chinese hands.