Welcome to #AskCEO - the Social Q&A with Steve Dainton!

ITTF launches a new series on social media by the name of #AskCEO, giving you the chance to send questions directly to ITTF CEO, Steve Dainton, via Twitter, Instagram and Weibo! A number of key topics were addressed in Episode 1. 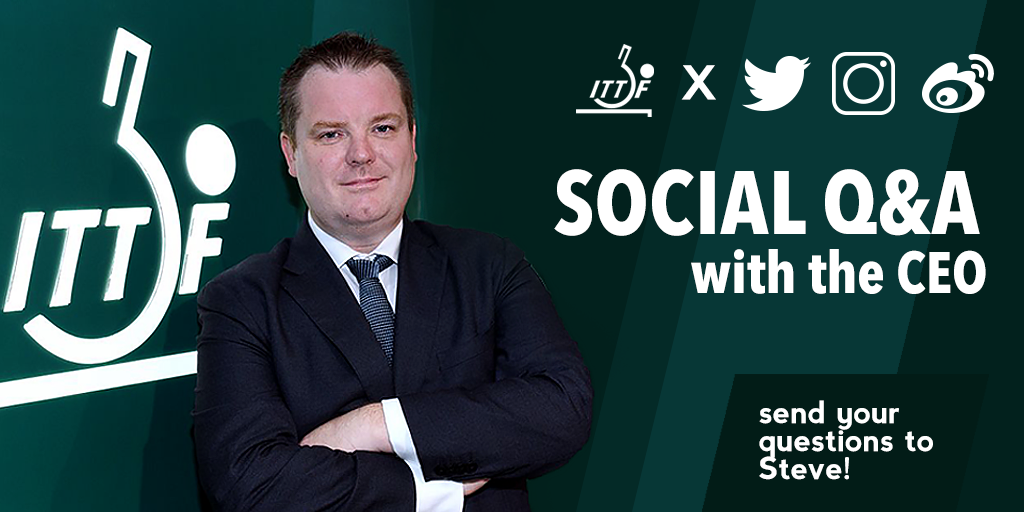 Proposed changes to the World Table Tennis Championships active from 2021 remain a hot topic ever since discussions were held at this year’s World Championships in Halmstad, Sweden.

In essence, the competition would be expanded in such a manner that players from all Member Associations have the opportunity to take part in the World Championships and to qualify for the World Table Tennis Championships Finals through the respective Continental Championships.

The matter prompted the Welsh Table Tennis Association to ask on Twitter whether there would be “a rethink of the World Championships format and the possible exclusion of small/less funded nations.”

? With the previous format, they get no media coverage and therefore are invisible both at home and abroad. However, we have heard the wishes, especially of the smaller European members, and we are considering how to find a good solution. (2/2)

Since the introduction of a new system in 2018, are professional table tennis players now facing too intense a schedule? Do they no longer have the time they need to rest and recover in between tournaments? Can the system be blamed for “injuries to older players”, such as Ma Long in recent weeks?

In response to a host of questions on Weibo and Instagram Stories, here’s what Steve had to say:

“The ITTF world ranking system asks players to participate in 8 events within a full calendar year. If you compare this to other sports, it’s a very low number. We’ve had a 30% increase in player turnout since the introduction of the new WR system, which should be seen as very positive. If the Table Tennis community and especially players want us to ensure that the international events are professional, first-class and with increased prize money, then we need to make sure that the top players are playing.” 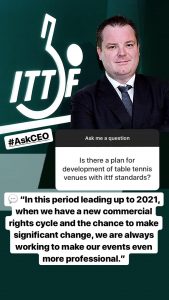 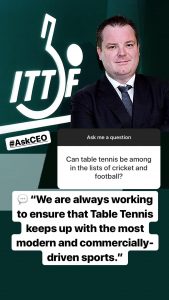 Will the TV reach and fan entertainment improve further still?

Can Table Tennis compete with the world’s biggest sports?

“In 2019, with our T2Diamond partnership, we plan to do a lot of testing of new technology, such as introducing a ‘challenge’ system (allowing players to challenge decisions) as well as technologies of the Hawk-Eye mould.”

“Over the last 15 years there have been many technical rule changes. Our current philosophy at the ITTF is that all changes should be more about system and structure, as we believe that will have a more positive impact and ensure that Table Tennis keeps up with the most modern and commercially-driven sports.”

ITTF embracing the digital world through cooperation with PingProfy