German and Chinese stars shine on Day Two at Disneyland!

Following a spectacular opening to the show at Disneyland Paris the question was whether Day Two at the Liebherr 2018 ITTF Men’s World Cup could deliver an experience just as exciting as the first, the answer was a big resounding yes as fans witnessed another epic day of elite table tennis action on Saturday 20th October.

Right from the word go spectators at the Disney Event Arena were treated to a dramatic contest as Germany’s Dimitrij Ovtcharov played-out a tight Round of 16 encounter with Mattias Falck.

Further success followed quickly after for German fans as two-time winner Timo Boll held off a competent display from Emmanuel Lebesson, seeing off the French hopeful across five games (11-8, 8-11, 11-8, 11-5, 11-7).

“Emmanuel is always a dangerous opponent. I was a bit worried about getting a good start but I did it and I think I played well today. It’s awesome playing in Disneyland and in France with many enthusiastic supporters. I hope they will continue to cheer for me.” Timo Boll

Vladi shows he’s still got it!

Celebrating his 42nd birthday earlier in the year but Belarusian legend Vladimir Samsonov showed the crowd in Paris that he’s still able to mix it with the best, a lesson Wong Chun Ting learned the hard way!

Storming to a three games lead, Vladimir Samsonov held off a late charge from the Hong Kong player to move through to the last eight (11-6, 12-10, 11-9, 7-11, 11-7) and was pleased to be a part of the wonderful atmosphere created by the local fans.

Absolutely fantastic atmosphere at the Disney Arena.??
Listen what did Vladimir Samsonov said after the victory in the Round of 16.#ITTFWorldCup pic.twitter.com/WUm3uhX85X

For Japan and China, the news from the Round of 16 was overwhelmingly positive: Tomokazu Harimoto and Koki Niwa, seeded sixth and eighth, chalked up comfortable victories over Jeong Sangeun and Jonathan Groth respectively while Fan Zhendong and Lin Gaoyuan brought Gustavo Tsuboi and Kanak Jha’s impressive runs to an end.

And then there were four

Rounding off the day’s programme were four thrilling quarter-final battles, one of which saw Dimitrij Ovtcharov fighting up against the ropes for the second match running.

“It was very tough. I think I had a lot of chances, then he got too strong in the middle of the match. It was very hard to play a second match finishing 4-3 in the same day. There were many good points and Lee played very well. When I was down 2-3, I actually didn’t change any tactics, but just tried to keep pushing. It’s a pleasure to play in front of a full crowd, especially in France where there are many table tennis fans. I hope that in future we will have more events with the same atmosphere.” Dimitrij Ovtcharov 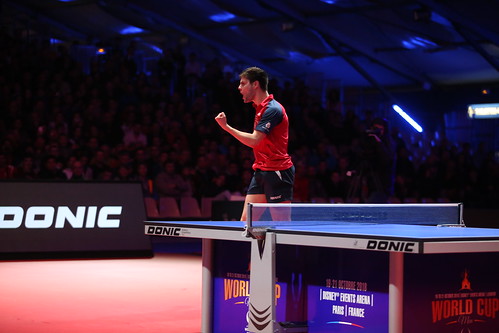 Registering a fine win earlier in the day but at the quarter-finals stage Vladimir Samsonov departed the title race as Fan Zhendong performed on another level (11-3, 11-6, 12-10, 11-6) and after the match there was a nice touch from the Chinese star, who heaped praise on his Belarusian counterpart.

“I have to control the match more and concentrate at all times. Vladimir is a top player and it’s always a pleasure to play against him. He has excellent tactics, so I always have to respect him.” Fan Zhendong

Can you feel the love tonight?

And finally, we tested Jonathan Groth’s Disney theme song knowledge. See for yourself just how good he was: