All the drama from Day One at Disneyland!

Comebacks kings, lively crowds and a special guest make it a first day to remember at the Liebherr 2018 Men’s World Cup in Paris

Down and out? Think twice!

It was a Friday of special comebacks in Disneyland Paris and the tone for the day was set from the very first match to grace Table One.

Emmanuel Lebesson’s victory in the first game against Hugo Calderano had the home crowd purring early on, but the highly-rated Brazilian soon turned on the style to take a commanding 3-1 lead.

With Calderano 9-6 up in the fifth game, it had looked as though victory for the 10th seed was a foregone conclusion. Wildcard Lebesson was on the ropes, but with the backing of a fervent French support he dug in deep to turn the match on its head completely.

His celebration at full-time said it all. 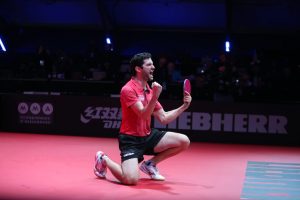 Surely the drama at Disneyland had peaked there? Not a chance! For there would be another fairytale involving a Frenchman in the second session.

Simon Gauzy had seen off Kanak Jha in straight sets, but Quadri Aruna was proving a far different contest, the Nigerian powering his way to a dominant 3-0 advantage.

“He was playing really well and I wasn’t able to put him in trouble with my services,” explained Gauzy after the match. “However, I kept believing, as did the crowd and my coach Patrick. At 3-0 down, I changed up my service game and that was really important.”

Right on cue, the next four games were a completely different spectacle, as Gauzy now made Aruna do all the running to mount the most spirited of comebacks that had the 4,000 in-house spectators rocking and rolling. 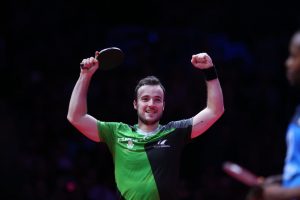 Table Two also had its moments, no less than the Group D match between Denmark’s Jonathan Groth and Sweden’s Mattias Falck.

1-0 Falck. 3-1 Groth. 3-3 tied. It was all to play for in the seventh game. Having lost out in their previous meeting, Groth had said he was keen for revenge on his friend Falck and sweet revenge is ultimately what he got.

Happily for Falck, defeat did not knock him out of the tournament as he bounced back to defeat Australia’s Heming Hu and progress to the main draw.

“It’s an unbelievable atmosphere here and one of the best I’ve seen so far in the world.” Even in the face of defeat, Quadri Aruna could see the bright side of playing at this year’s Men’s World Cup.

Whilst spectators have naturally been flying the flag for French duo, Lebesson and Gauzy, many have been the moments when it’s been one big party. Music, singing, dancing… and the weekend hasn’t even started yet!

Luck of the draw

Once all 12 of the day’s matches were over, the moment of truth had arrived for the remaining 16 players plus a number of fans who were in no hurry whatsoever to leave the building.

The main draw mapped out the rest of the tournament, providing some more mouthwatering ties to be played tomorrow: 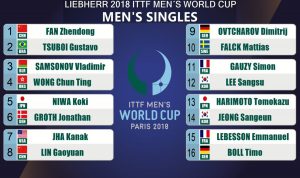 When in Rome… Disneyland rather! Visiting this magical place obviously wouldn’t be the same without meeting you know who. 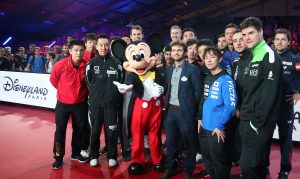 Late invite, but glad you could make it over, Mickey! ?@Disney ? #ITTFWorldCup pic.twitter.com/XuqSYN9xwm