Situated in the central area of the country, Yaoundé the capital city of Cameroon was the recent home for an ITTF/PTT Level One Coaches Course and Training Camp; proceedings commenced on Monday 13th August and concluded on Sunday 19th August.

Organised under the auspices of ITTF High Performance and Development, it was the first activity to be staged in the dedicated table tennis hall built thanks to the support of the Chinese Embassy and opened officially earlier this year in April; the expert on duty was Frenchman, Nicolas Petit, ITTF Continental Development Manager.

Overall 28 coaches, including eight women and also one Para player, representing eight provinces, attended. Furthermore, in addition, the coaches were accompanied by their most promising young players; a total of 32 youngsters aged seven to 18 years of age attended.

A promising group of young players, notably just over six weeks ago in Algiers at the 2018 African Youth Games, Yossou Ahmed Nenba, in partnership with Nandeshwaree Jalim from Mauritius, had won bronze in the Mixed Team competition. Certainly such results and the advent of a new purpose built centre bodes well for Cameroon

“As the last coaching course happened in 2011, there was a strong need to train new coaches. This event had two main components. First, it was very action orientated. Each morning a theoretical session was followed by an afternoon practical session with the young players; later, coaches expressed a strong motivation to develop Para and women’s table tennis in every corner of the country.” Nicolas Petit 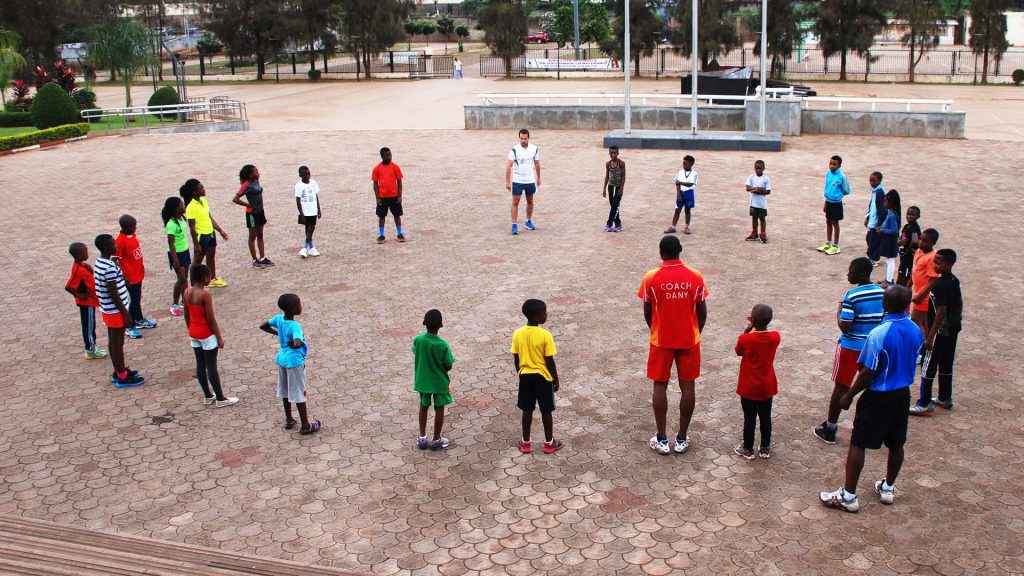 Warm up sessions signalled the start of training (Photo: courtesy of Nicolas Petit)

Equally, in the guise of Sarah Hanffou, winner of the Women’s Singles event at the 2010 African Championships when staged in Yaoundé, the young players have a splendid role model; also, most importantly, there is backing from local government.

“Local authorities quickly heard about the success of the event and organised audiences to receive the National Federation President and myself. The Ambassador of China and the Minister of Sport expressed their full support for the development of table tennis as a tool for education and social cohesion in the country of 256 ethnics. Also they expressed their ambition to win medals on the international stage.” Nicolas Petit 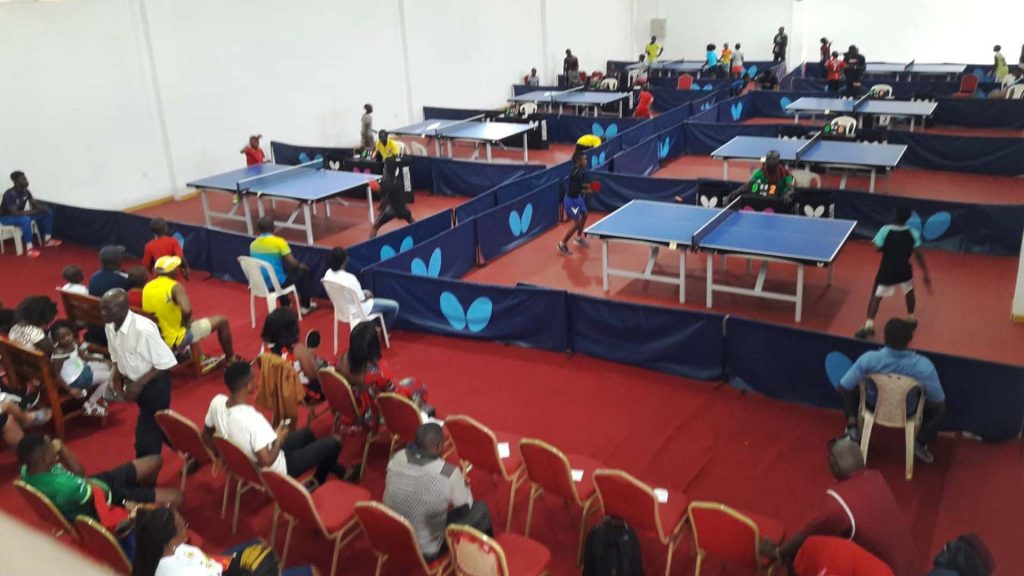 On the concluding day, a tournament was organised, the matches all keenly contested but most important was the fact the venue proved more than ideal.

The event demonstrated the hall is capable of hosting regional events such as a Hopes Week, an ITTF Challenge or ITTF World Junior Circuit event. 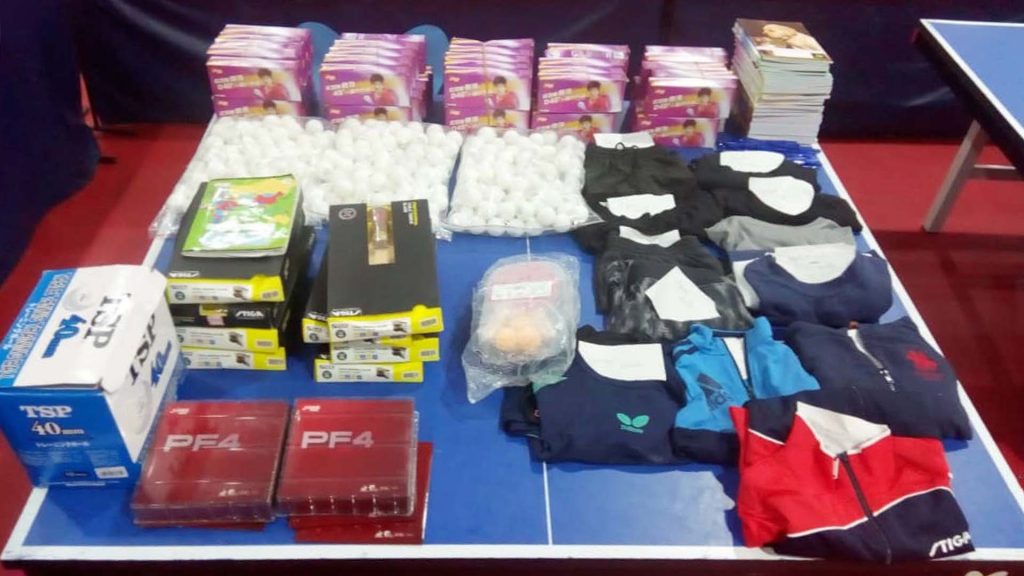 Materials were presented at the Closing Ceremony (Photo: courtesy of Nicolas Petit)

Proceedings concluded with a Closing Ceremony, in addition to certificates being presented, the coaches were presented with table tennis balls, 100 for each of the eight regions.

Furthermore, some 50 notebooks and pens were distributed to the young players for the start of the new school year; additionally the best players in the Under 12 years age group, each received ten racket blades and 20 racket coverings. 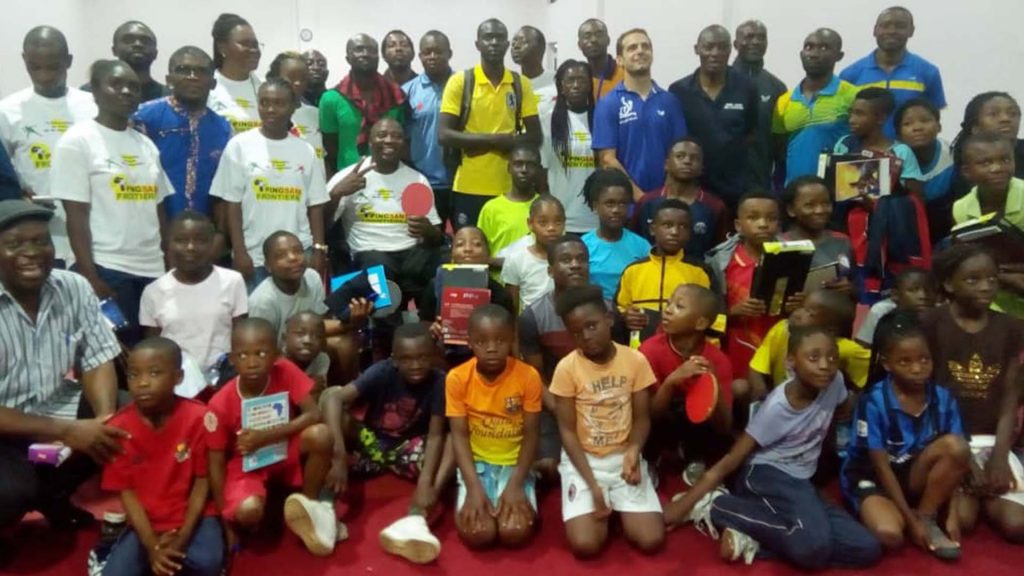 All smiles from both coaches and players (Photo: courtesy of Nicolas Petit)