Less than a year away, Peru prepares for major sporting gathering

Staged in Lima, the opening ceremony scheduled for Friday 26th July, now less than a year away, the Peruvian Table Tennis Federation is in an advanced state of planning for the 2019 Pan American Games.

Part of the preparation, administered under the auspices of ITTF High Performance and Development in conjunction with the Latin American Table Tennis Union, was a recent Basic Umpires Course.

Conducted by Colombia’s Yoanna Ramirez, proceedings were held in the José Diaz Stadium in Lima on Sunday 29th and Monday 30th July.

Overall, a total of 23 umpires from three regions in Peru participated; in addition to Lima, students travelled from Trujillo and Arequipa.

All were enthusiastic and willing to learn; none more so than Jorge Chunga Liu, a 35 year old economist.

“My expectations regarding the course were met and exceeded. I think we learned everything related to the rules and regulations to perform in international events. I thank the Peruvian Federation as well as the International Table Tennis Federation and the Latin American Table Tennis Union for arranging this course. I invite the national federation to continue organising these courses for the improvement of national umpiring and thus guaranteeing good presentation of the sport.” Jorge Chunga Liu

A most positive response; it was the same from Mila Ccasani Paile, medical student who began umpiring one year ago.

“All this is something new for me, a year ago I was at the international table tennis open “Juan XXIII” as an umpire. I had no clear knowledge of the rules and regulations, so this course enriched my knowledge greatly.” Mila Ccasani Paile

Similarly, it was a motivated Pedro Mario Padilla Sulca, a 34 year old mathematics graduate who dreams of being able to represent his country in the Pan American Games in Lima in the capacity of international umpire.

“The expert, Yoanna Ramirez, set an example to follow with her professionalism and knowledge of the rules; I thank her for her patience and help in answering all the questions that I had. I am able to understand the rules in a better way. I hope to progress as an umpire and participate in international competitions such as World Championships or Olympic Games and have the opportunity to meet the best players in the world.” Pedro Mario Padilla Sulca

A successful course, it was very much mission accomplished. Now the national association has a qualified group of officials for the organisation of national, regional and international events, a fact that pleased German Gonzales, the Chair of the Peruvian Table Tennis Federation’s Umpires and Referees Committee.

“The Federation is committed to the formation of an umpiring team for the Games next year in Lima. We have been waiting for this type of training for a while so it is an opportunity for our umpires to update. We managed to summon 23 umpires to participate on this course so we are very happy with the great response. We hope to continue organising more such courses.” German Gonzales

A total of 13 course members achieved the necessary standard to receive the Basic Umpires Award. 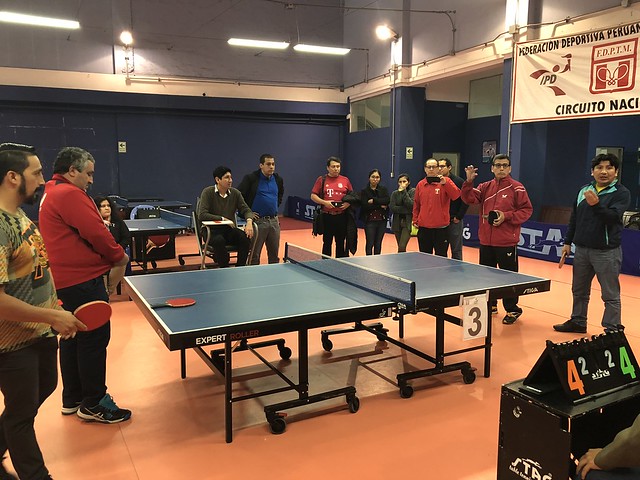