Staged in Balatonfüred, a popular Hungarian resort on the banks of Late Balaton, a total of 156 players from five countries competed in 17 events in the recent XIV Tibhar Cup.

The host nation’s Krisztina Spengler emerged the most successful player on duty, she secured a full house of available titles.

She won Women’s Singles 40 to 49 years, in addition to partnering colleague Andrea Turner to victory in Women’s Doubles 49 years and Joszef Nyiro to Mixed Doubles gold..

Undoubtedly the efforts of Krisztina Spengler attracted the attention as did one player who did not gain a podium finish. At 93 years of age, Austria’s Margit Schieder, was the most senior competitor. 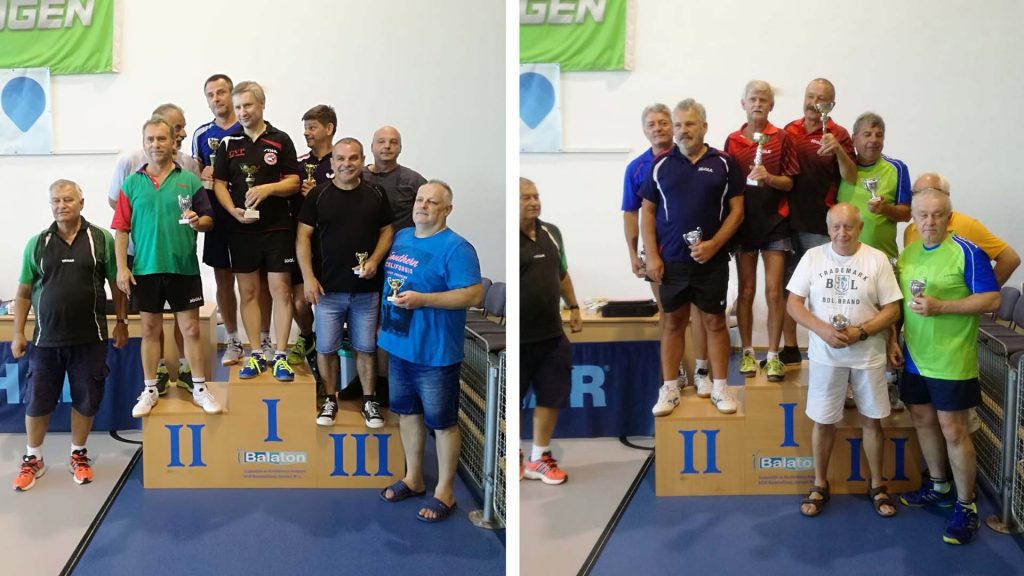 The medallists in Men’s Doubles 50 to 59 years (left) and (right) 60 to 69 years, Ferenc Karsai (far left) is the presenter. (Photo: courtesy of Istvan Bajdik)

Noteworthy names and there were more. Present was Hungary’s Bela Frank, winner of Men’s Singles 60 to 64 tears at the 2018 World Veteran Championships in Las Vegas, the previous month. He won the same age group in Balatonfüred.

Furthermore, he was a Men’s Doubles 60 to 69 years bronze medallist in partnership with colleague Akos Horvath, as was another notable name. In the same event, former Hungarian international, Karoly Nemeth, also had to settle for the third step of the podium; he partnered Aladar Peter. In addition Karloy Nemeth was the bronze medallist in Men’s Singles 65 to 69 years.

Notable names and one more catches my eye from the 1980s and early 1990s; partnering Hungarian colleagues, Miklos Somosi was the runner in partnership with Peter Aranyosi, more usually on coaching duties, in the Men’s Doubles 50 to 59 years; in addition to gaining the same finish in the Mixed Doubles with Csilla Szabo. 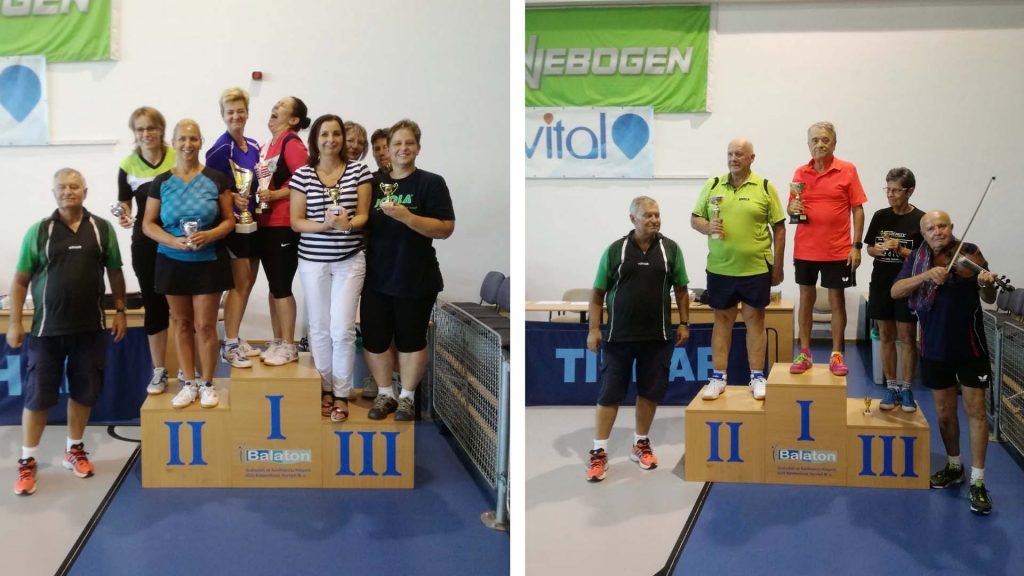 The podium for Women’s Doubles 40 years and Over (left) and (right) Men’s Singles 70 to 74 years. The presenter (far left) in Ferenc Karsai (Photo courtesy of Istvan Badjik)

The Tibhar Cup winner based on the results gained overall was the host nation’s Dr Katalin Belafine; the presentations were made by the host nation’s Ference Karsai, the man who in 2003 guided Austria’s Werner Schlager to the Men’s Singles title at the Liebherr World Championships in Paris.

Swaythling Club International: The family that plays together, stays together

Eberhard Schöler, yet another landmark, a special celebration