Titles secured and secured in style, China emerged successful in both the Cadet Boys’ Team and Cadet Girls’ Team events at the 2018 Polish Junior and Cadet Open in Wladyslawowo-Cetniewo on Saturday 27th May.

Most impressively in Wladyslawowo-Cetniewo the Chinese duo secured the title with the loss of just one individual match; that being at the quarter-final stage when in opposition to the Russia ‘A’ pairing of Sergeyv Ryzhov and Vladislav Makaraov, they lost the doubles (11-8, 8-11, 11-5, 7-11, 11-9)

Otherwise, it was three-nil victory margins in every encounter. In the penultimate round they beat the Poland ‘A’ Team pairing of Kuba Kwapis and Maciej Kubik, before securing the title at the expense of Belgium’s Adrien Rassenfosse and Nicolas Degros.

In the opposite half of the draw Adrien Rassenfosse and Nicolas Degros had accounted for the Romania ‘A’ partnership of Andrei Tomica and Julian Chirita prior to ending the hopes of the German ‘A’ Team comprising Jeremy Loeffler and Hannes Hoermann.

Impressive from Xiang Peng and Kuang Li, it was even more impressive from their female counterparts, Chen Yi and Li Yuqi in the Cadet Girls’ Team competition; not one individual match was surrendered.

At the quarter-final stage they beat Germany’s Sophia Klee and Naomi Pranjkovic followed by a semi-final success in opposition to Russia’s Elizabet Abraamian and Arina Slautina to the reserve their place in the final.

Success against one Russian pair, in the final it was success against another; they beat Liubov Tentser and Alina Zavarykina to arrest the title. Defeat for Liubov Tentser and Alina Zavarykina but it had been a most creditable performance; in the quarter-final round they had beaten Lithuania’s Kornelija Riliskyte and Emilija Riliskyte by three matches to nil before recording a three-one success in opposition to Romania’s Luciana Mitrofan and Elena Zaharia. 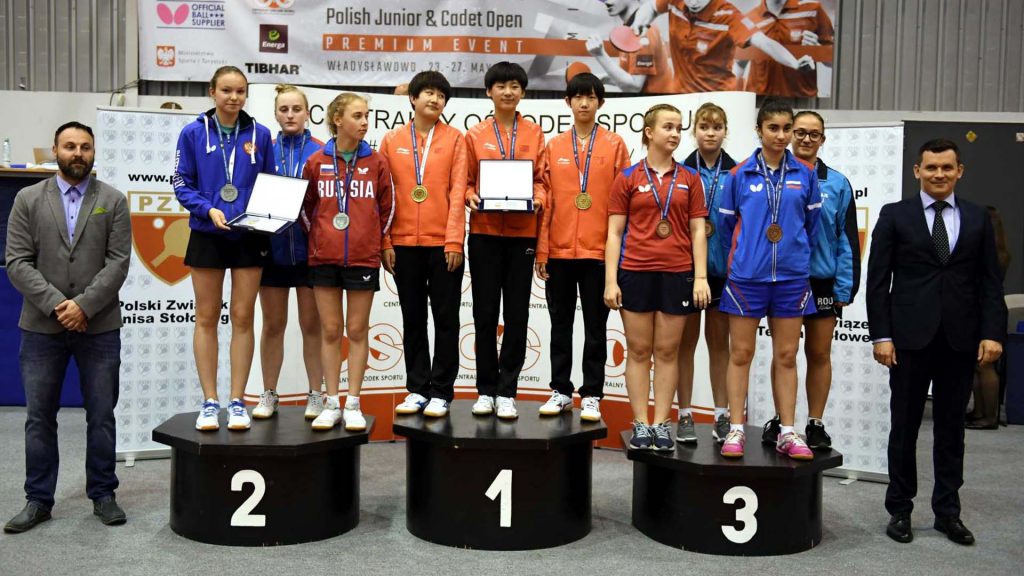