Located in the province of Madhya Pradesh, Indore was the host for an ITTF Level Three Coaches Course from Saturday 28th April to Saturday 5th May.

Organised under the auspices of ITTF Development and High Performance, it was the third such initiative to be staged in the country; two years earlier in the same city, the Abhay Prashal Table Tennis Academy had been the home for the first.

A total of 10 coaches participated; notably in addition to those who had travelled from throughout India, Ting Ing Hock journeyed from Malaysia to what was a unique event.

Christian Lillieroos and Richard McAfee from the United States were the Course Conductors for the eight days, the first time two experts have been on duty in such circumstances. Impressively, together they have conducted over 100 courses on behalf of the International Table Tennis Federation.

Thanks to the support of Dhanraj Choudhary, ITTF Board Member and Mr. M.P. Singh, Secretary General of the Table Tennis Federation of India, some 28 ITTF Coach Education Courses have now been completed.

“Tenvic is a company formed by Anil Kumble and Vasanth Bharadwaj. It promotes the well-being of people and ecosystems across personal and professional spheres, fostering lasting cultural, social and economic benefits for individuals and societies in India aimed at positively impacting the lives of people through sports in schools and clubs.” Richard McAfee

The support from Tenvic is invaluable but as with all such initiatives, an effective local organising committee is essential. In Indore, the local organisers were outstanding.

Some 24 junior and cadet players from throughout India attended; several members will be travelling to Dubai to join in the extensive and innovative eleven day training camp. 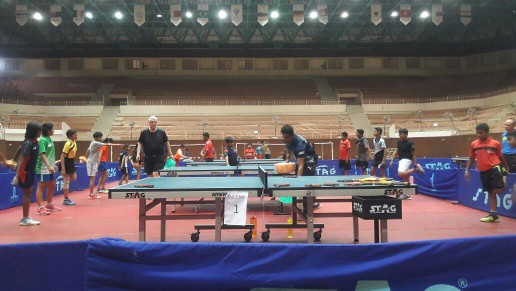