Impressive from Thailand’s Rungroj Thainiyom, London 2012 gold medallists; it was the same from Great Britain’s Will Bayley, Rio 2016 gold medallist but in the Men’s Singles standing categories at the 2018 Slovenia Para Open in Lasko on Wednesday 9th May, the player to attract the attention was the host nation’s Luka Trtnik.

Against the odds, the aspiring 20 year old secured first place in his group.

Competing in Class 7, Luka Trtnik finished the day ahead of Hong Kong’s Lee Ming Yip and Slovakia’s Miroslav Jambor, the no.3 seed, in an event that witnessed more than its fair share of surprises.

“This is unbelievable. I wasn’t expecting this. Both matches were extremely hard, physically and emotionally, they were five games. I am happy that it ended the way it did. Hard work pays off.“ Luka Trtnik

Likewise, Jean-Paul Montanus of the Netherlands, the no.2 seed, had to settle for second place behind Japan’s Kazuya Kaneko, whilst Brazil’s Paulo Salmin, the no.9 seed, was beaten by Thailand’s Chalermpong Punpoo (5-11, 12-14, 11-9, 11-9, 11-5) and like Jean-Paul Montanus finished in runners up spot.

Problems for noteworthy names but not for Great Britain’s Will Bayley, top spot in the group was attained but in his opening contest he did experience problems; he needed the full five games to beat Hong Kong’s Chen Silu (11-3, 11-4, 8-11, 12-14, 11-6).

“It wasn’t my best today but I’ve got to deal with where I am at and find my way through the tournament and use all my experience to try and win my matches. Sometimes you’ve got to play when you’re not playing your best. I was really happy to win my first match because I was nervous. It was a strange match because I played really well in the first two games and then I think I told myself to keep the ball on the table and he would make mistakes but he didn’t. I had to find something inside me to win that match. Sometimes I play better when I’ve had a tough day so I really feel that I can bounce back tomorrow and play better.” Will Bayley

First place for Will Bayley in Class 7, it was the same for Rungroj Thainiyom in Class 8; an event where likewise there was an upset. Ukraine’s Viktor Karp, the no.6 seed finished in second position in his group behind Germany’s Thomas Rau.

A successful opening day for Rungroj Thainiyom and Will Bayley, it was the same for Ukraine’s Viktor Didukh in Class 8 and Iuri Nozdrunov in Class 9, as it was for Bulgaria’s Denislav Kodjabashev in Class 10 and Belgium’s Florian Van Acker in Class 11.

“I’m very happy to beat Grudzien. It was a great result as he is the Rio bronze medallist and I haven’t played him for some time. I actually didn’t think I played very well against him but mentally and tactically I was pretty perfect and if I hadn’t been I don’t think I would have won. It is good for me because I think in the past playing against that sort of player if I’m struggling and not feeling great I could have crumbled, so I was really happy to come through that match. On the back of Slovakia last week I’m feeling quite positive and wanted to come here and continue my momentum and see how far I can go.” Aaron McKibbin

Likewise in Class 9, there was a surprise, Finland’s Esa Miettinen, the no.3 seed, finished in third place in his group behind Japan’s Noboyuki Suzuki and Bart Van der Zanden of the Netherlands. Meanwhile in Class 11, the upset pattern was repeated; Japan’s Ryo Miyauchi, the no.6 seed, was beaten by Hong Kong’s Wan Wai Lok (11-4, 16-14, 3-11, 8-11, 11-7) and thus had to settle for second place in the group. Wan Wai Lok remained unbeaten to top the group.

Play in the individual events concludes on Thursday 10th May. 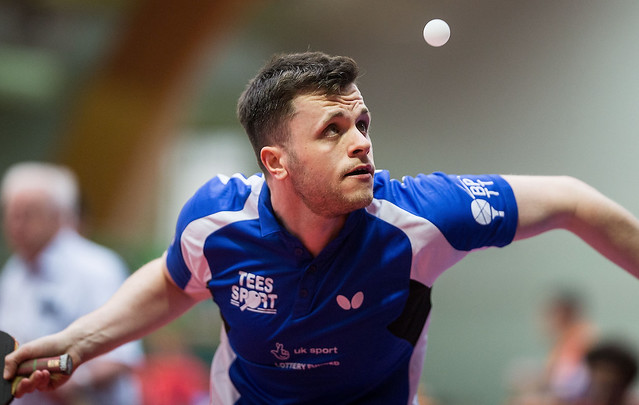