The Chinese Men’s Team are the 2018 Men’s Team World Champions after a comprehensive victory over Germany in the Liebherr 2018 World Team Table Tennis Championships which concluded today, 6 May 2018 in Halmstad, Sweden. 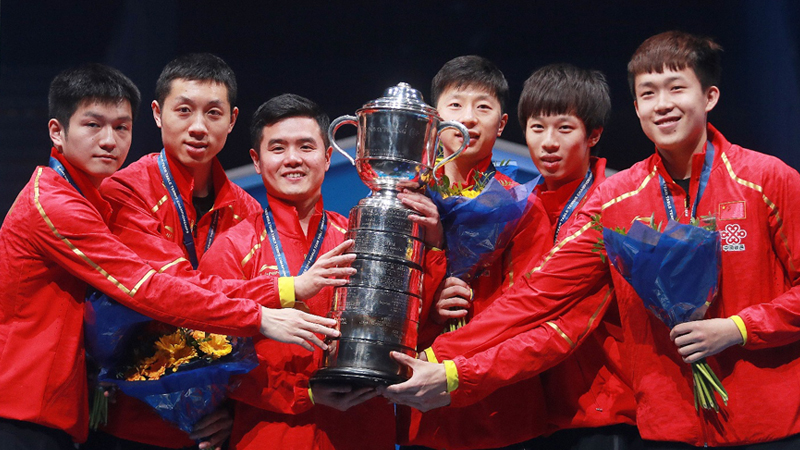 This was the 21st time that the Chinese men’s team lifted the Swaythling Cup, and it matches the Chinese women’s team’s achievement from yesterday.

The defending Champion faced long-time rivals, European Champion Germany in the final battle for Gold. A bombshell was dropped by Germany one hour before the match started, with the number one seeds leaving the world #3 Dimitrij OVTCHAROV out of the team due his poor condition due to injury.

After lifting the Swaythling Cup for a sixth time, MA Long stated: “We all played very well today. This win is a credit to all our hard work, and our entire team, including all our coaches and staff. We are very happy inside our hearts to again be World Champions, especially beating such a tough German team led by Timo BOLL. I am now focusing on the qualification path to Tokyo 2020 where I want to defend my title.”

World #1 FAN Zhendong was crowned the most valuable player, after going through the tournament undefeated and showing why he is the best player on earth!

With the crowning of Men’s Team Champion today, the 8-days Liebherr 2018 World Team Table Tennis Championships has come a close at the Halmstad Arena in Sweden.

Earlier yesterday, the Chinese Team also claimed their 21sttitle in the Women’s Team event after a convincing 3-1 victory over Japan.

In the third division, it was Lithuania Men’s & the Indonesian Women’s Team who prevailed to progress to the second division.

The world’s best players now turn their attention back to the Seamaster 2018 ITTF World Tour, with the next event, Hang Seng Hong Kong Open happening from 24 – 27 May 2018.