2018 is shaping up to be a game changer for table tennis. ITTF CEO Steve Dainton, sat down to detail what’s on the forefront for ITTF and the table tennis community in the coming year. 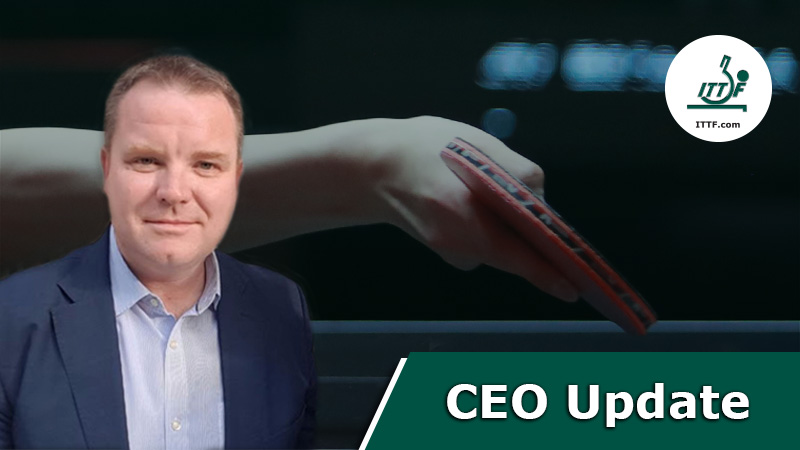 Top of the list for 2018 is the creation of a strategic plan.

The project is being led by James Morris on the Executive Committee and is one of the most critical and important tasks to be completed by the upcoming AGM. “Currently we are working with Deloitte, a professional agency in the financial sector but also in sport’s consultancy, to put together the ITTF Strategic Plan,” says Dainton. “Several meetings have already taken place, with the process fully kicking off in Astana last December. There, Deloitte met with the continental presidents and representatives as well as members of the ITTF staff. It was a productive period, with a presentation from Deloitte and we also carried out our first working session.” The project will lay a strong foundation and provide a clear direction and orientation for ITTF. “All professional organisations have some kind of strategic plan to guide them on their pathway to the future. The Executive Committee is fully committed and it’s an exciting project as it will be the first time ever for the ITTF to have a strategic plan. It’s an important professional step forward for us as we take our 2018 journey.”

Running concurrently with the strategic plan is work on restructuring competition formats, which is being led by the Future Events working group. “The Future Events working group, has been active for a couple of years now,” says Dainton. “In 2017 there was a bit of a slowdown, but it’s time in 2018 to come to conclusions from the work. This will have a long-term positive effect on our competition structure.” Reminiscent of the introduction of the first professional tour more than two decades ago, the working group’s recommendations will see a new direction in the structure of the biggest ITTF events. While there is a discussion around the format of the World Cups, the primary focus is on the World Championships. “The key message and goal is to go from having about fifty percent participation in our World Championships to having one hundred percent participation,” says Dainton. “Obviously having that number makes it quite difficult to run the event all in one place at one time. To achieve that result of one hundred percent participation, we have to look deeply at how the World Championships are formatted.” Participation is one element, but increased visibility for the nation’s taking part is also a priority. “At the end hopefully we will have system where every country can participate in the World Championships, and most importantly every country can be part of an event that gives them the chance to be visible in their home country and for the home country to see them play in an important global event,” says Dainton. The goal is to bring everyone on board to support this restructuring by Halmstad. “It’s very exciting because if we want to keep up to date in the modern world we have to constantly be looking at what we are doing with our competitions. It’s been a long process but by Halmstad hopefully we get the whole ITTF community behind us on this because I do think that it is an important project.”

Perhaps one of the hottest topics at the moment is the new world ranking system that was introduced in January. “With the new world ranking system you can see that are quite a lot of changes, and in some cases some big changes. But this has been a very important move by the ITTF and one that we believe is integral for our products and the events that we are working on, such as the World Championships, and most importantly the World Tour.” The new system will look to maximise the potential of events for players, fans, and sponsors. “The idea is to drive more participation at the events,” says Dainton. “What we hope to achieve is that the best players are competing at the top events all the time. If they are consistently competing, we are able to sell the events better to our broadcasters and to sponsors, and also our fans get to see the top players playing all the time. By guaranteeing that, it gives us a greater chance to improve these products and grow revenues.” The players’ interest is at the forefront, and the goal is to have a sustainable model which creates an attractive environment for the athletes. “I think what is most important there is to grow the revenues to give it back to the players through prize money. It’s then our responsibility to look after the players in the future and that they benefit from such a situation. If they don’t benefit in the long term, then we should reconsider.” While the philosophy behind the new ranking system is firmly established, Dainton is perfectly open to the possibility that the system may need some fine tuning during the course of 2018. “We are keeping a very open mind to how the world ranking will operate in the future,” says Dainton. “Not all new systems work perfectly from the beginning and often they need upgrading. We are quite clear that with a new world ranking we need to see how it works in the first year and maybe throughout the year make adjustments where necessary to fix certain holes that the system may have.”

As well, and never forgetting the amazing Development work that has been done over the years by the ITTF: “we have restructured this area, so it can also grow faster and faster. We have big plans to do much more Sport for Development by creating the soon to be officially launched ITTF Foundation. We want to grow our projects which will have a fantastic social effect in the future. More projects and even more larger scale events. We feel that creating a foundation will allow for this growth to happen. At the same time we believe this will allow our Development area to also have a larger focus on Sports Development and trying to help countries improve their overall table tennis technical level. These two items will be a large focus in the next few years.”

The final major project for 2018 is the rollout of TTX. “TTX has been a bit slower to put out in to the market than what we hoped,” admits Dainton. “Primarily this because we realised that it’s important to get the equipment to be at a professional level, and the process for this is quite complicated. But we are ready to go now and we should start to see some events and equipment in 2018. The future of any sport is with capturing the interest of the new generations, and TTX looks to do just that. “The IOC are often giving us messages that we need to find ways to make our sport more attractive to the youth and make the sport as they say more urban. I think this is a small step and will perhaps help change slightly the image that the sport of table tennis has as an underground sport, in many parts of the world at least, and bring the sport from the underground in to the open. There is a growing buzz around TTX, which is catching the attention of people both inside and outside of table tennis. “Manufactures really support us heavily, they think it’s a great new concept and idea. There is also quite a lot of interest from sponsors and event organisers, to add different elements of table tennis to what they are doing. We think we are on a pretty good track here with TTX.”

With all these projects and changes in the works, not going into details of constitutional change, staff restructuring and growth, to name a few other projects in the wings, then 2018 certainly looks like being one of the biggest years yet for ITTF.

Inner Spin - from Lockdown to #RESTART!