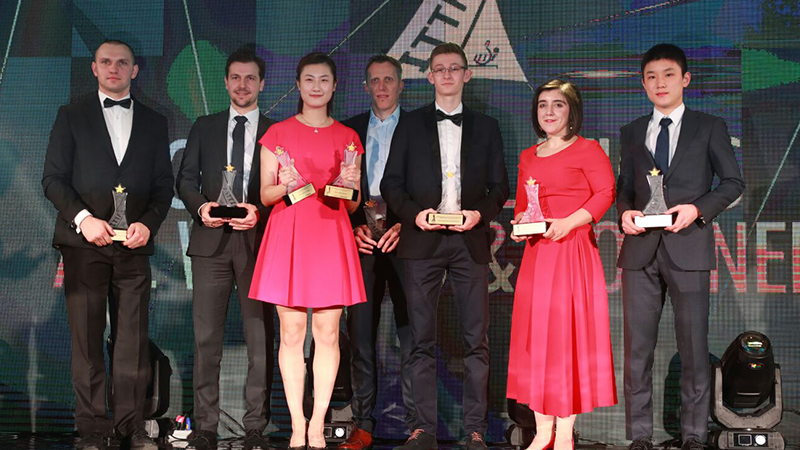 The year ending gala dinner and award ceremony was held tonight, 14 December at the Rixos President Hotel in Astana, Kazakhstan, where the world’s best table tennis stars and coaches dressed up in glitz & glamour to join in a night of celebration for their achievements over the past year, and eight prestigious awards were handed out to the respective winners.

It was former world number one BOLL, who rolled back the years to pull off several amazing comebacks and spectacular action in 2017 who impressed table tennis fans all over the world and the expert panel, which included athletes and members of the media, to garner the most votes to be crowned the 2017 Table Tennis Star.

The 36-year-old shared “I am very surprised to win this prestigious award against so many top players who have had an amazing year. Thanks to all my team and all the players who helped me win this amazing award. This award is for my fans, they are my inspiration!”

After fending off competition from current world number one ZHU Yuling (CHN), Japanese superstar Miu HIRANO and Chinese Taipei number one CHENG I-Ching, the 27-year-old stated: “Thank you so much! It’s a great honour! I want to thank ITTF for giving me this award. Thank you to all who supported me, I will keep fighting for more awards like this. I promise to make this game more popular in the world! Thank you!”

DING walks home as the biggest winner from the Astana 2017 ITTF Star Awards as her lightning fast rally against ZHU at the 2017 World Championships final was voted by fans as the 2017 Star Point presented by Seamaster.

Class 8 World number one Viktor DIDUKH who actively represented Ukraine on the ITTF World Tour prior to being diagnosed with cancer in 2008 that necessitated amputation of his left leg, took home the Male Para Table Tennis Star award presented by Tinsue after winning several titles at various para table tennis Open & Championships events around the world.

Having coached the German team to reclaim the Men’s Team Gold at the European Championships, as well as led top German stars BOLL & OVTCHAROV to several World Tour titles & victory at the 2017 Men’s World Cup, Germany’s Jorg ROSSKOPF was named the 2017 Star Coach presented by Butterfly.

The 2017 Fair Play Star was handed out to France’s Irvin BERTRAND for his act of fair play at the Belarus Open where he gave his opponent his spare racket to compete fairly in the competition, after his opponent failed the racket control testing and was not allowed to play.

With the conclusion of the Astana 2017 ITTF Star Awards, the world’s best table tennis stars now return to the Seamaster 2017 ITTF World Tour Grand Finals held in Astana, Kazakhstan from 14-17 December to battle for the US$1,000,000 prize money on offer at the season ending finale.