Etymologists may disagree where the sidespin-topspin backhand flick got its name. Is it from the unique curvature of the arm? Or is it from how the sidespin bends the ball?

Either way, future table tennis historians will credit the first use of the shot to Petr Corbel. But it wasn’t until Zhang Jike trademarked the banana and took it all the way to a world title that it really caught on.

Now the technique is in everyone’s repertoire. It has revolutionised the game, making it simple to peel off a return on even the toughest of backspin serves.

A shot for those of us with a sweet tooth. The banana split has the same sidespin as the banana, but drizzled in a delicious under-spin sauce. Nothing satisfies the tastebuds more than watching the opponent dunking the ball in the net after serving up a banana split.

The term was coined by the voice of table tennis, Adam Bobrow, at the 2017 Czech Open, when Mima Ito sent half a dozen flying.

Not quite as popular as the basic banana, the technique is gaining momentum. Even Dima was spotted preparing a banana split for his next outing.

Still feeling famished after a bunch of bananas? The strawberry is the third shot making its way in to the game.

The opposite sidespin as the banana, the strawberry often puts unsuspecting opponents in a jam.

Mima Ito is an expert practitioner, Simon Gauzy certainly has a taste of the shot, and it’s also a must have move for any defender wanting to add some extra juice to the ball.

While Xu Xin is known for throwing in the shot, a video recently went viral of Zhang Jike practicing the strawberry.

It may not be a staple of the regular table tennis diet, but it looks like it could rival the banana in the future. 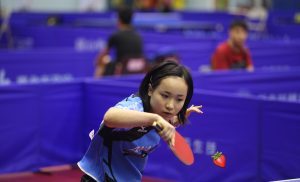