The first gold medal was given today in Düsseldorf, and it was almost four decades in the making.

Drought broken, Tokyo next? It’s 38 years since Japan won gold at a World Championships. Kasumi Ishikawa and Maharu Yoshimura made sure there wouldn’t be a 39th year when they came from behind to defeat Chen Chien-An and Cheng I-Ching 4-3.

Tokyo is set to host the 2020 Olympic Games and next week the IOC will decide whether or not mixed doubles table tennis will be a medal event. Could the win sway the decision at all?

“I’m very glad that mixed doubles was getting attention here, and of course if there is mixed doubles at Tokyo 2020 then I will go for it.” Kasumi Ishikawa.

Whoops: Ding Ning was able to avenge her defeat to Miu Hirano at the Asian Championships today, defeating the Japanese starlet 4-1 to move in to the final.

In the fifth Ding got ahead of herself and thought she had won the match. She roared in victory, pumped her fist, and then went to shake the umpire’s hand; unfortunately the score was only 10-5.

“This is my third World Championship. The other two times I played I lost to Liu Shiwen. This time going in I was thinking I cant give up and thats what I did. I’m very proud.” Zhu Yuling

Quote of the day: Lee Sangsu continued his good form in Düsseldorf by taking down Vladimir Samsonov 4-1 in the last 16 of the Men’s Singles. After the match Samsonov was full of praise for Sangsu’s speed. Can Vladi still keep up? His first World Championships was in 1993 where he was beaten by Jean-Philippe Gatien 3-1. Is there any chance this could be his last?

“Maybe this year I will continue playing, but what will happen after I don’t know.” Vladimir Samsonov

Checkout some of the best shots from the day below: 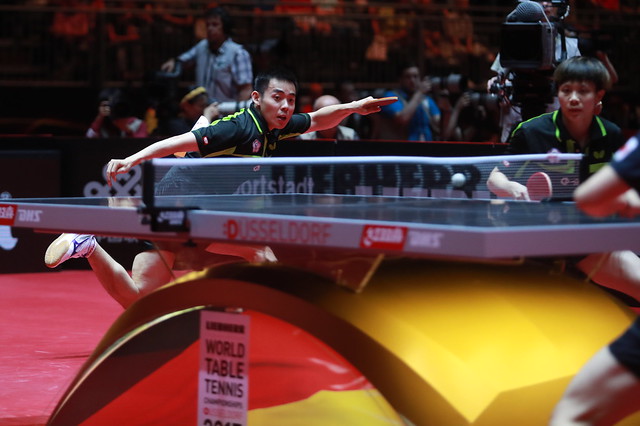