Friday 26th May marked the start of the team competitions at the 2017 Polish Junior and Cadet Open in Wladyslawowo–Cetniewo; much to the thrill of the spectators there were plenty of shocks and talking points to take away from the day's action.

One of the big surprises of the day saw the top seeds Romania ‘A’ make an early exit from the Junior Boys’ Team competition.

Despite picking up comfortable victories over Belarus and Poland ‘A’, a three-two defeat to Korea Republic in the opening Group A match resulted in disappointment for Romania ‘A’.

Cristian Pletea can at least take heart from his effort in the match having earned a brace for Romania ‘A’ but with Kwak Yu Bin, Choi Inhyeok and Cho Kijeong all registering a win each it was Korea Republic who progressed.

Another shock came in Group E as 11th seeds Belgium edged out Sweden to qualify for the quarter-finals.

Moldova’s Andrei Putuntica and the Hungarian duo of Patrik Juhasz and Istvan Molnar managed to negotiate their difficult group to advance through to the last eight while France, Russia, Germany ‘A’, Japan ‘A’ and Japan ‘B’ also progressed to the next stage.

There was also action from the Cadet Boys’ Team competition, as the crowd was treated to a strong display from the host nation’s squads.

Seeded second for the event Poland ‘A’ headed into the competition as one of the favourites to fight it out for the title and as expected the lineup of Samuel Kulczycki and Maciej Kubik comfortably moved through to the quarter-finals.

Poland ‘B’ caused somewhat of an upset after the eighth seeds eliminated the seventh seeds Czech Republic ‘B’  in the group stage, but surely it was Poland ‘D’ who produced the biggest story from the category.

The team of Lukasz Sokolowski and Maksymilian Miastowski were named outside the top ten seeding positions, yet despite the odds being against them the duo saw off the no.5 seeds Canada alongside picking up victories over Estonia ‘A’ and Romania ‘C’ to finish top of Group E. 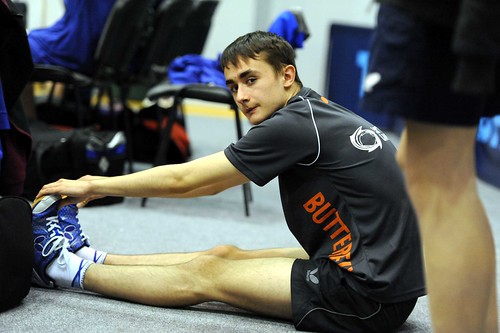