Home fans were treated to a sensational match of table tennis on Thursday 16th March in the qualification tournament for the 2017 ITTF Challenge Belgosstrakh Belarus Open as the host nation's Alina Nikitchanka recovered from three games down to win her final group stage match and subsequently book her spot in the Women's Singles main event.

Alina Nikitchanka faced Japan’s Yui Odono in the concluding tie in Group 8, and the stakes were high. The player to emerge victorious from the match would seal top spot in the group and earn a spot in the main event, while the defeated contestant would be pushed down to second place in the group.

While Nikitchanka may have had the home crowd on her side it was actually Odono who dominated the start of the match, with the Japanese competitor cruising into a commanding three games lead.

However, against the odds Nikitchanka fought back and the determined Belarusian would go on to stun her opponent as she not only managed to level the tie but also claim first position in the group, claiming four consecutive games to complete the comeback victory (4-11, 6-11, 3-11, 11-9, 11-7, 11-8, 11-8).

“In the first three games I attacked too much and made mistakes. In game four I changed my tactics dramatically and started playing defence, which helped me to gain points. Actually, I even became more relaxed with the score at 3-0 because I had nothing to lose. Then, I grew more and more confident with each rally that I won. In the final game I struggled for each ball and managed to win, and I’m extremely glad I could make it”, Alina Nikitchanka.

The other Belarusian player to successfully negotiate her qualifying group was Daria Trigolos.

Heading into the second day of qualifying both Daria Trigolos and her final opponent Debora Vivarelli of Italy held four points each to their names following positive outcomes on the opening day of the qualification event, but only one player could finish Group 9 in top spot and that turned out to be Trigolos as she powered to a straight games win over Vivarelli (11-7, 12-10, 11-8, 11-6).

“I feel pretty good about this match. Still, I think I need some more confidence, because I haven’t had enough practice since the games (Stag 2017 European Under 21 Championships) in Sochi. Those were great, and now I can see that some participants here are stronger than me, but I will surely do my best to get as far as I can”, Lisa Lung.

Solomiya Brateyko and Ievgeniia Vasylieva will both represent Ukraine in the Women’s Singles main draw, after both players managed to come through their respective qualifying groups without suffering a single defeat between them. 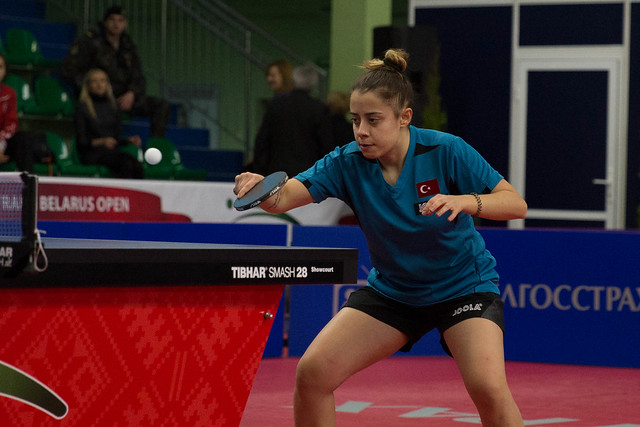