The shocks don't stop coming at the Seamaster 2017 ITTF World Tour Qatar Open, with Day Two of the main competition providing yet more unexpected exits from some of the world's top players at the Ali Bin Hamad Al Attiyah Arena on Friday 24th February.

Fans were left stunned on the opening day of the main event as China’s Zhang Jike and Ma Long suffered an opening round exit from the Men’s Doubles tournament, and while Ma Long responded well on Day Two with his victory over Qatar’s Li Ping (11-7, 7-11, 11-4, 11-6, 11-9) there was no such joy for Zhang Jike.

Drawn in an exciting encounter with Japan’s Koki Niwa, fourth seed Zhang Jike was looking to book his spot in the Men’s Singles quarter-finals. However, unfortunately the Chinese star was forced to withdraw from the tie due to a fever and it is Koki Niwa who progresses to the last eight.

One Japanese representative who was involved in action in the Round of 16 was Masaki Yoshida, and his time at the competition will be extended following his eye-catching victory over Germany’s Dimitrij Ovtcharov.

Masaki Yoshida, who is the world no.72 in the ITTF World Rankings table for February 2017, was trailing Dimitrij Ovtcharov following the conclusion of game three and there was a strong level of expectation to see the sixth seed Ovtcharov come through the match relatively unscathed.

“At the beginning of the match, he was so strong from the backhand, so I changed my tactic… I tried to return the service positively by using the banana return. For sure this is the highest ranked player I have ever beaten”, Masaki Yoshida.

Another big shock came in the Women’s Singles draw as the top seed Zhu Yuling exited the competition to Germany’s Shan Xiaona in the Round of 16.

“I think I played well against Zhu Yuling today, my receive of her serves was good. She was slower getting into the game as well and wasn’t playing her best level…”, Shan Xiaona.

Victory for Germany over China in one encounter, but a very different outcome unfolded in Han Ying’s match against Chen Meng. 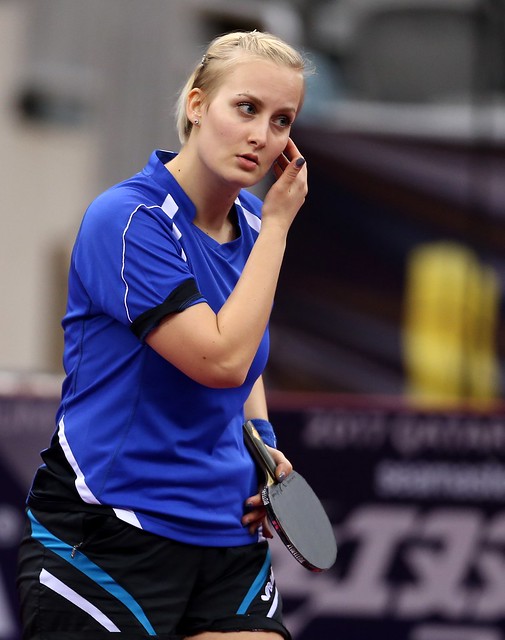