Friday 24th February will mark Day Two of the Seamaster 2017 ITTF World Tour Qatar Open in Doha, and one of the standout fixtures of the day comes from the Men's Singles event where China's Xu Xin and Fang Bo will battle it out for a place in the quarter-finals.

The Qoros 2015 World Championships in Suzhou, China hosted a tie between Xu Xin and Fang Bo in the last 16. Fang Bo won on that day and would eventually go on to reach the Men’s Singles final, but Xu Xin prevailed in their most recent on the World Tour which took place at the Laox 2016 ITTF World Tour Japan Open.

Another intriguing encounter in Doha that could be worth keeping a close eye on is the match up of Portugal’s Marcos Freitas and Croatia’s Tomislav Pucar in the top half of the Round of 16 draw.

Chinese Taipei’s Cheng I-Ching is the no.4 seeded player for the Women’s Singles draw, and awaiting her in the last 16 is a tricky encounter with Misaki Morizono of Japan.

Runner up at the Seamaster 2016 Women’s World Cup in Philadelphia Cheng I-Ching has demonstrated that she has the ability to go on and succeed on the world stage, but don’t rule out the possibility of an upset in Doha with Misaki Morizono having already beaten the 2016 European Women’s Singles champion Hu Melek on Day One of the Seamaster 2017 ITTF World Tour Qatar Open.

Next up for Miyu Kato is the challenge of taking on the no.6 seed and fellow compatriot Mima Ito, with a spot in the last eight up for grabs.

Elsewhere, Singapore’s Feng Tianwei will take on Li Jie of the Netherlands, and the no.5 seed Han Ying will face the no.9 seed Chen Meng.

Following the shock Men’s Doubles elimination of Ma Long and Zhang Jike on Day One of the main competition, there is just the one pairing from China that remains in the event with Fan Zhendong and Liang Jingkun set to participate in the quarter-finals where they will meet France’s Tristan Flore and Emmanuel Lebesson.

Kasumi Ishikawa and Miu Hirano both suffered surprise exits from the Women’s Singles category in Doha, but the Japanese duo are set to take to the table once again in the Women’s Doubles competition with Hong Kong’s Doo Hoi Kem and Lee Ho Ching providing the opposition in their opening encounter of the day. 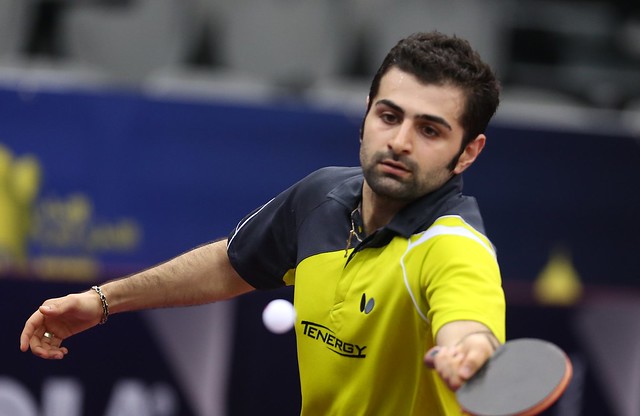