Main event begins, top seeds to take to the tables in Doha

After two days of qualification matches, the main draw stages will begin as the seeded players prepare to start their campaigns with a strong start in Doha.

Seeded first for the Women’s Singles competition China’s Zhu Yuling has been placed right at the top of the Round of 32 draw where she will meet qualifier Jiang Huajun of Hong Kong in her opening match.

Competing on the ITTF World Tour for the first occasion in 2017 Zhu Yuling will be hoping to put in a positive display in Doha, and the Women’s Singles champion from the Seamaster Qatar 2016 ITTF World Tour Grand Finals will also be looking to improve on her result achieved at last year’s Qatar Open where she was eliminated in the semi-finals by Liu Shiwen.

While Liu Shiwen may not be on the competitors list for the Seamaster 2017 ITTF World Tour Qatar Open there are a further four Chinese players participating in the Women’s Singles tournament alongside the entry of Zhu Yuling.

Placed in the top half of the draw Wu Yang will face Poland’s Natalia Partyka as Chen Meng goes head-to-head with Hong Kong’s Ng Wing Nam, while the two other Chinese contestants Gu Yuting and Wang Manyu will respectively take on Miu Hirano and the second seed Kasumi Ishikawa.

Singapore’s Feng Tianwei and Germany’s Han Ying will be involved in their first World Tour matches of 2017 when they meet Minnie Soo Wai Yam of Hong Kong and Hana Matelova of the Czech Republic in their last 32 encounters, and Turkey’s Hu Melek, who won the Women’s Singles trophy at the 2016 European Championships, has been drawn to face Japanese competitor Misaki Morizono.

The host nation Qatar will be represented in the Men’s Singles main draw, with Li Ping and Ahmad Al-Mohannadi set to make appearances on day one of the main tournament.

Awaiting Li Ping in the Round of 32 is a difficult tie with Korea Republic’s Kim Minseok, who has already condemned the likes of Gao Ning and Jonathan Groth to exits in the qualifying rounds. However, when the two opponents last met it was Li Ping who came out on top with a six games victory over Kim Minseok at the GAC Group 2015 ITTF World Tour Korea Open.

Ahmad Al-Mohannadi will face Spain’s Alvaro Robles in the last 32, with the winner moving forward to book a spot against either the second seed Fan Zhendong or Japan’s Yuya Oshima.

Belarusian contestant Vladimir Samsonov will be hoping to avoid a similar fate to his opening match exit that he suffered at the Seamaster 2017 ITTF World Tour India Open where he lost to Asuka Sakai. Samsonov competes in his first match of the Seamaster 2017 ITTF World Tour Qatar Open against Sweden’s Mattias Karlsson, while Germany’s Dimitrij Ovtcharov will kick-off his campaign in Doha with a fixture against Jiang Tianyi of Hong Kong.

Ma Long, Xu Xin, Zhang Jike and Fang Bo will also be in action on day one in Doha. 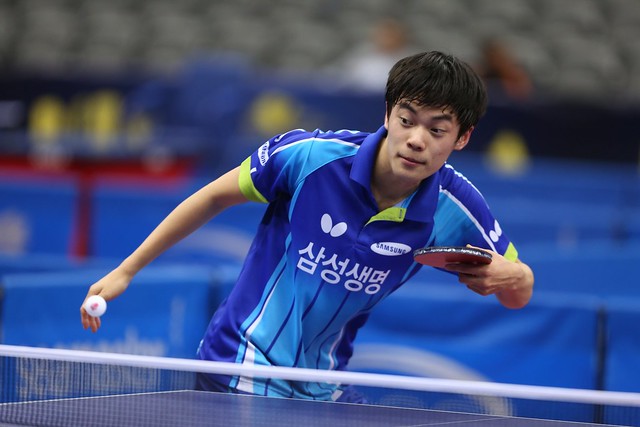