Japan ‘B’ and Azerbaijan claim Junior Team success in Metz

Saturday 18th February marked the fourth day of the 2017 Premium Junior Circuit French Junior and Cadet Open, and the day also marked the conclusion of the Junior Boys' and Junior Girls' Team events with Japan ‘B’ and Azerbaijan emerging victorious in the French city of Metz.

Heading into the Junior Boys’ Team competition Japan ‘B’ was named at 15th position in the seeding table, and so qualification from the group stage had already ensured that the team would finish above its assigned seeding.

Therefore when Japan ‘B’ came out on top against the no.1 seeds France ‘A’ by a 3-1 scoreline in the quarter-finals the home crowd was left speechless, as the lineup of Haruki Miyamoto, Aoto Asazu and Hiroto Shinozuka moved into the penultimate stage of the competition.

Then Japan ‘B’ completed its road to the final after the team recovered from a trailing position in the last four to beat Japan ‘A’ in a 3-2 thriller.

Awaiting Japan ‘B’ in the final was another surprise package Azerbaijan after the 14th seeded team picked up 3-1 victories over the no.2 seeds France ‘B’ in the last eight and France ‘C’ in the semi-finals, and the Azerbaijan side consisting of Wang Chenxi, Yang Xinyu and Vazir Allahverdiyev was looking to finish the tournament in style as the team went into the final with confidence.

The final turned out to be a rather interesting encounter and while Japan ‘B’ ran out comfortable winners, Azerbaijan put up a good fight.

Then the match was brought to a close as Hiroto Shinozuka defeated Vazir Allahverdiyev (11-4, 14-12, 11-6) to give the Japanese team the title with a 3-0 victory over Azerbaijan.

“It’s a good performance. Last week, we played against them in the Czech Republic, so we have analyzed their tactics. I think France A or B are the best team in this competition”, Japan coach Sanada.

There may have been disappointment for Azerbaijan in the Boys’ Team final, but the story couldn’t have been more different in the Girls’ Team competition as the second seeds secured the silverware.

Azerbaijan’s Chen Xingtai, Ning Jing and Deng Simeng negotiated the encounter in the semi-finals against Turkey with a 3-0 triumph, and their reward was a place in the final where the top seeds Japan awaited.

Ning Jing caused a major upset at an earlier stage of the 2017 French Junior and Cadet Open when she stunned Japan’s Maki Shiomi to capture the Junior Girls’ Singles crown, and the Azerbaijan representative gave her team the perfect start to the Girls’ Team final after she beat Yuko Kato (11-9, 11-6, 7-11, 11-8). 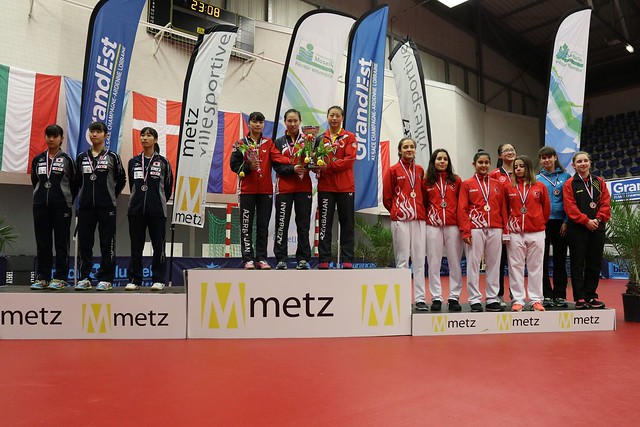