Newly crowned Olympic Champions MA Long and DING Ning step back onto the court for the first time since their Rio 2016 triumph tomorrow at the 2016 ITTF World Tour SheSays China Open in Chengdu, China. 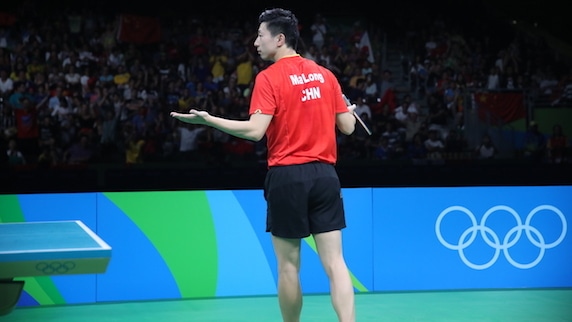 The Chinese pair has been on a whirlwind media and promotional tour since the Olympic gold medals were hung on their necks and both of their lives have changed forever. However, tomorrow they will get back to what they do best; playing table tennis!

MA, who is bidding to win a fourth straight China Open, stated: “After Rio, we got a lot of attention in China and internationally, it has been crazy. To be honest, this will affect me, as I have not had the opportunity to train as much as I am used too. But I will have to get adjusted and play my best. Thank you for all the fans’ support, I will be playing for you here in Chengdu.”

There will be no repeat of the Rio 2016 final, with ZHANG Jike being drawn into the same half as MA Long. However, if the 2012 and 2016 Olympic Champions remain undefeated, there will be a blockbuster semifinal on Sunday morning.

MA Long has an amazing 22 World Tour titles to his name, but that is still four less than the evergreen Vladimir SAMSONOV’s (BLR) 26. SAMSONOV will be looking to make that 27 as he heads the list of international players at the China Open.

The China Open is the start of a new era for the Chinese Women’s team, as it is the first without the legendary 2012 Olympic Champion LI Xiaoxia after her retirement following her Rio 2016 silver medal. Olympic and double World Champion DING Ning will now lead the team, with LIU Shiwen and 2015 China Open champion ZHU Yuling backing her up to start the new generation of Chinese superstars.

Fresh off her team silver for Germany at Rio 2016, Xiaona SHAN will be looking to keep up the momentum in Chengdu to make 2016 a truly memorable year!

The China Open is the 17th of the 20 events on the 2016 ITTF World Tour, and the final Super Series event of the year. The ITTF World Tour is categorized into three tiers: Super (six events), Major (six events) and Challenge (eight events). The higher the tier, the higher the prize money, better playing conditions and tougher competition for the title.

All the players playing ITTF World Tour events are fighting not only for prize money and world ranking points, but also World Tour ranking points to qualify for the lucrative World Tour Grand Finals, taking place on 8-11 December 2016 in Doha, Qatar.

The 2016 ITTF World Tour is set to be the most extensively followed tour in history, with more events shown live throughout the world on television, and all the events being shown live on ITTF’s live streaming platform, ITTF.com/itTV.