Stars of stage and screen meet; a humbling experience and a lesson for us all

Neither a previous medallist in the prestigious multi-sport gathering but they are two most celebrated names, following one outrageous point and one assertion that where there is a will there is a way.

On the morning of Thursday 8th September in the group stage of the Men’s Singles Class 6 event at the Rio 2016 Paralympic Games, Great Britain’s David Wetherill met Egypt’s Ibrahim Hamadtou.

In the same phase of the Men’s Singles Class 6 event at the London 2012 Paralympic Games; jet propelled, David Wetherill had flown through the air to execute a forehand top spin against Germany’s Tomasz Kusiak, it won a point that brought a standing ovation.

Four years later at the ZEN-NOH 2014 World Team Championships, Ibrahim Hamadtou was the special guest of the International Table Tennis Federation; both arms amputated, he stunned everyone by holding the racket in his mouth. Incredibly he was able to execute top spin rallies with the likes of Jun Mizutani, Vladimir Samsonov and Wang Hao!

The verdict in Riocentro Pavilion 3 went in favour of David Wetherill; his greater level of versatility being a telling factor as he made use of the angles to secure a straight games victory (11-5, 11-7, 11-5).

“Yes everybody remembers that one point from London but of course that was four years ago; in fact I try to block it out”, said David Wetherill. “London and all the support was amazing but the main thing since London has been to rectify the mistakes I made.”

Seeking to improve, David Wetherill has also made changes to his style of play.

“I have changed from Tenergy on both sides of my racket; now I have short pimples on my backhand”, he explained. Tenergy is a smooth reversed rubber produced by the Butterfly company, ideal for top spin attacking play.

The famous point at the London 2012 Paralympic Games

“I think I’m now more stable, more solid”, added David Wetherill, who clearly is determined to prove that his more than a flying forehand.

“We have been preparing for this tournament for a long time; a few weeks ago I did feel a bit jittery but today I felt comfortable in the hall”, he added. “Since London I am more relaxed when I play; now I’m less stressed when I play, let’s see what happens”

It is for 26 year old David Wetherill his third Paralympic Games and just as in London it was special but for a very different reason, for being able to play against a very special human being.

“It was a great honour to play Ibrahim, he is a legend; he puts life into perspective”, stressed David Wetherill. “We come here to bash a table tennis ball, there is life outside this hall; today I won but he displayed far more skill than me, I can only stress such a great honour!”

Where there is a will there is way, illustrated by Ibrahim Hamadtou

Admiration, equally Ibrahim Hamadtou was most respectful of his adversary.

“It is my first Paralympic Games, I lost to a very good player; David is amongst the best in the world.”

There was not a hint of regret or disappointment in the manner of Ibrahim Hamadtou.

“I feel that I played really well, an excellent performance”, he said. “I am really very satisfied with my level.”

Moreover, Ibrahim Hamadtou was of the clear view he was better for the experience.

Look to the positives in life, it is a message for us all. Salute Ibrahim Hamadtou, a very special human being from whom we all can learn

Where there is a will there is way, illustrated by Ibrahim Hamadtou 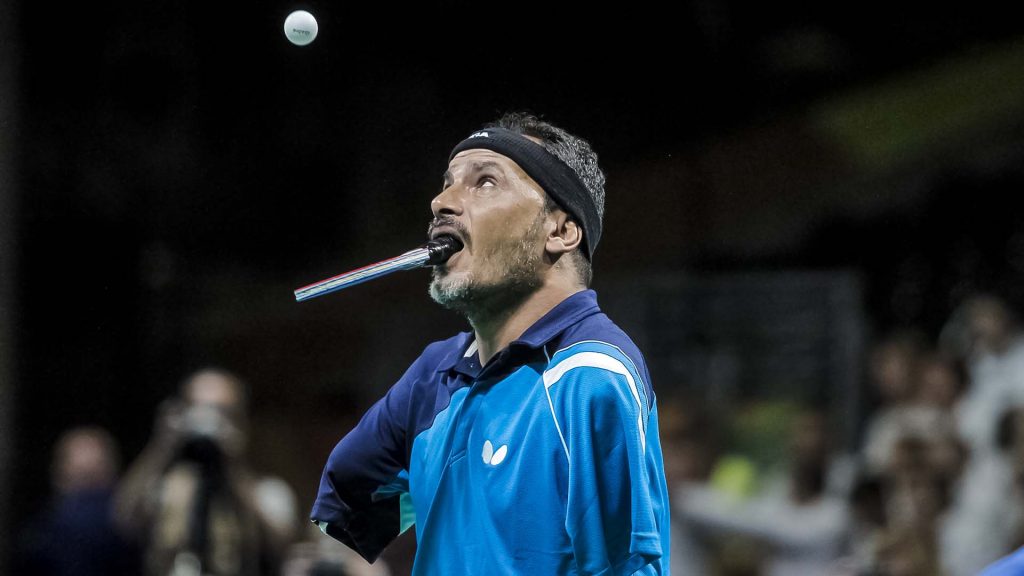 Salute Ibrahim Hamadtou, a very special human being from whom we all can learn (Photo: Richard Kalocsai)