'Fantastic' crowd support at Rio 2016, but is it a problem for the players?

Table Tennis at the Riocentro – Pavilion 3 has featured a great crowd turnout in the first couple of days of Rio 2016, with chanting and rejoicing creating an electric atmosphere. However, are the supporters helping or distracting the players on the tables during some of the most important matches of their careers? 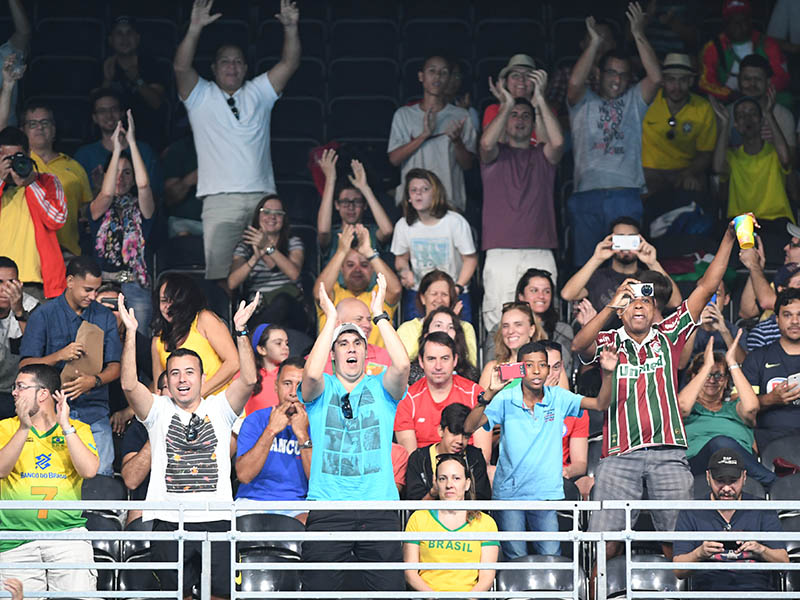 The Riocentro – Pavilion 3 is the venue for the 2016 Olympic Table Tennis events, and the 6500 capacity hall has provided the perfect platform for supporters to be a part of the action.

ITTF President Thomas Weikert is delighted with how events have panned out so far, “The venue is tremendous, the atmosphere is even better. It is better than we expected” Mr Weikert added, “The Brazilian crowd has been fantastic; I’m surprised for the first two days there are so many people here.”

Many of the competitors appear to agree with the ITTF President’s opinion. “Great great crowd, great atmosphere; it’s really good to play here,” said Great Britain’s Liam Pitchford, while Slovenia’s Bojan Tokic stated that the crowd has motivated him to compete at the next Olympic Games in four years’ time despite rumours that these Games could be his last, “This crowd is incredible, the atmosphere is amazing, just think what it will be like in four years’ time in Tokyo where table tennis is a bigger sport that here in Brazil”.

One of the hopefuls from Brazil is Hugo Calderano, who entered day two as his country’s sole remaining representative in the Olympic Table Tennis. Calderano is happy to see the crowd getting behind him, but knows he can’t afford to get carried away if he’s to go far in the competition, “It was a very good experience… There were many people supporting me but I have to keep calm and to be concentrated on the match.”

The spectator’s support may be welcomed by some, but there are those who would like a more controlled environment. Jens Lang, Performance Director and National Head Coach for Table Tennis Australia, believed that it was difficult for his player Jian Fang Lay to concentrate during her match with Maria Dolgikh (Russia) on day one, “It was not easy to maintain focus for seven games… There was all the noise from the Brazilian crowd with Gui Lin playing on the next table.”

Even Gui Lin herself found the crowd overwhelming at times and at one point the Brazilian player had to raise her hand in an attempt to quieten the fans as her opponent Galia Dvorak (Spain) was trying to serve, “Table tennis is a sport where you have to be quiet; they have to focus and there are three other tables playing, and I thought it wasn’t right to disturb the others because of me.”

Wang Jianan of Congo was impressed by the supporters’ passion in his tie with the host nation’s Gustavo Tsuboi, but claimed that the crowd’s efforts to lift the Brazilian actually had the opposite effect: “The atmosphere here is great; I played a match in the morning as well, so I think I was more used to the conditions.” Wang added, “I think the cheering from the crowd gave him more pressure. I think it was too much, he didn’t play that well today.”

While many of the attending fans to date within the Riocentro have been Brazilian, a good number of spectators from other Latin American countries have also travelled to support their players. Puerto Rican teenager Adriana Díaz, made a terrific comeback against Olufunke Oshonaike of Nigeria and the 15-year-old Díaz  put her success down to the amazing support she received from the fans, “I feel like I’m in my country, because there are many people shouting and supporting. That encourages me to shout and celebrate with them. I am very happy that they are here.”

@diazadriana123 celebrating with her fans first ever #Olympic win at #Rio2016

There seems to be a mixed reaction to the fan behaviour at the Rio 2016 Table Tennis tournament; some players enjoy the excitement while others have raised valid issues.