The home earlier this year for the Perfect 2016 World Team Championships; more recently, Malaysia was the host for an event of a somewhat different nature but again one designed to promote the best interests of table tennis.

An ITTF/PTT Course was the subject on the agenda; proceedings commencing on Monday 18th July and concluding on Friday 22nd July.

However, the capital city of Kuala Lumpur was not the location as it had been in late February and early March; the home was Labuan, a federal island territory of Malaysia, situated off the country’s east coast. Excellent Premises

Matters were organised under the auspices of the ITTF Development Programme in conjunction with the Table Tennis Association of Malaysia, the Labuan Table Tennis Association and the National Sports Institution. Throughout, the University Malaysia Sabah Labuan was the venue, providing excellent facilities, a fact appreciated by Christina Chee, the expert on duty, for the first such course to be staged in the East Malaysia.

Seven table tennis tables, 400 balls, two pairs of crutches and two wheelchairs were available for the 24 students who attended; a total of 22 men and two women.

Additional to members being from the local area, several travelled from Sarawak, Sabah and Miri.

Furthermore, there were two members from foreign shores. William Salako Oluyomi, a Physical Education Teacher arrived from Abu Dhabi; whilst also present was Andrey Volko, a Russian living in the Korean city of Daejeon where he is a part-time coach.

“The course was extremely satisfying and there was no boredom at any time”, said William Salako Oluyomi. “All aspects were informative but the Para Table Tennis part opened up new possibilities for developing the Table Tennis programme in the United Arab Emirates.”

Equally Andrey Volko was most positive.

“The aspects on organizing, rules, managing and planning the coaching process were useful for me”, he said. “I learned many activities and exercises which will help my future coaching of kids to be more innovative and more effective.” 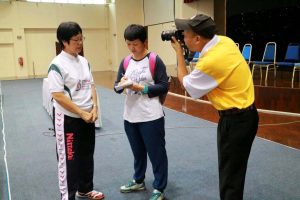 In addition, matters were reported in local newspapers in both Malay and Chinese.

Present throughout proceedings was Alex Shau, President of the Labuan Table Tennis Association and Alan Albert Au, the Sabah full time coach; they are national level two coaches and appreciated the efforts made by Christina Chee.

It was the same reaction from Suddin Lada and Syed Nasirin, they are professors at the University Malaysia Sabah Labuan International Campus who coach table tennis part time to family members and university students. They were most positive as was Emily Yapp, a recreational player.

“I really enjoyed and had lots of fun during the practical coaching moment”, she said.

A successful course with Christina Chee grateful for the support received.

“Thank you to Mr. Zaini Abd. Aziz, Director Youth and Sports, Federal Territory of Labuan, he visited us and with words of encouragement for the coaches; explained Christina Chee. “He said a good coach is not just one who talks but uses the theory learned into his or her practical field.”

Appreciative of the efforts of particular personnel; Christina Chee was also grateful to the organisations who assisted.

All the coaches passed the practical test except one of the participants could not complete the course owing to family commitment an ITTF Club Coach Participation Certificate was presented. 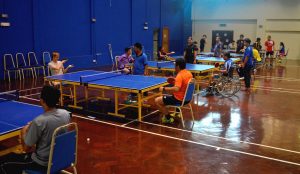 Month of FEMpowerment to break the glass ceiling