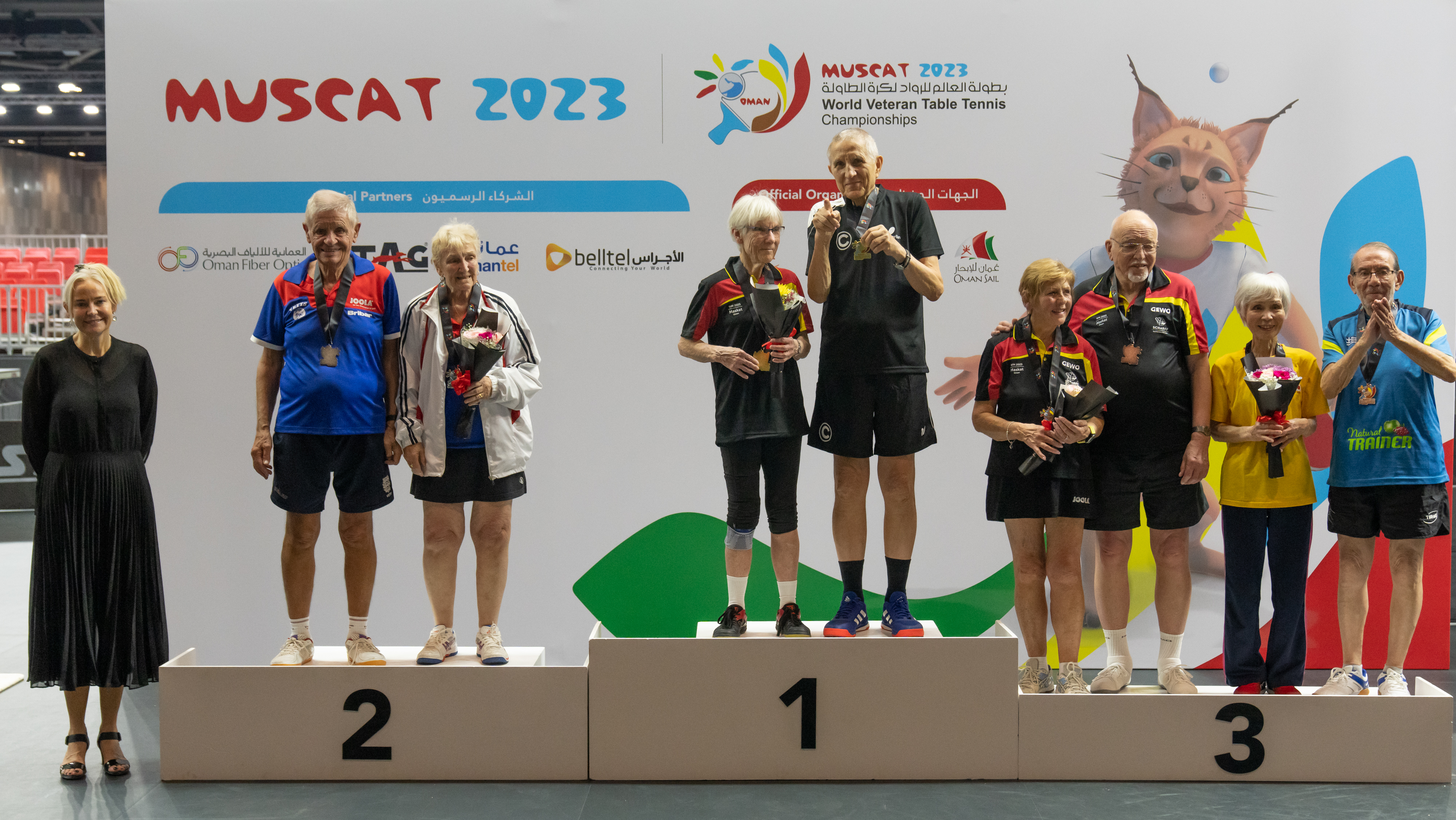 The first-ever mixed doubles World Veterans Championships titles were awarded in Oman on Friday, January 20th. This was a historic moment in the event’s history, since it was first staged in 1982 in Gothenburg.

Denmark’s Carsten Egeholt and Janne Jensen emerged as the winners of the 40-year event, by overcoming the pair of Sweden’s Igor Krokhin and Finland’s Marina Donner (11-9, 3-11, 11-7, 11-9) in the final. Similarly, Latvia’s Sandijs Vasiljevs and Ina Jozepsone secured gold in the 50 years category by defeating Denmark’s Karsten Haumann and Pia Toelhøj (11-7, 11-9, 11-7).

In the mixed doubles 65 years category, Norway’s Paal Guttormsen and Estonia’s Kai Thornbech secured the top spot on the podium by ending the hopes of Ukraine’s Leonid Segal and Svea Onno in a four-game match (7-11, 11-7, 12-10, 11-7).

The title decider in the mixed doubles 75 years category was a contest between pairs from the United States, with husband and wife teams facing off against each other. David and Donna Sakai beat Del and Connie Sweeris (12-10, 11-7, 8-11, 11-4) to take the top prize. Notably, Connie Sweeris was a member of the United States team that visited China following the 1971 World Championships in Nagoya.

China also secured a title in the 70 years age category, as Cheung Tingting and her Chinese colleague, Jiang Zhaozhao, overcame the pairing formed by India’s Pinakin Sampat and Japan’s Etsuko Iseki (11-3, 11-1, 11-5) in the final.

Italy’s Hansjoerg Toll and Korea Republic’s Oh Yunkung won the 45-year event, while Romania’s Andreas Fejer-Konnert and Switzerland’s Margit Geiger emerged victorious in the 55 years category. Play concludes on Saturday 21st January with the men’s and women’s singles and doubles titles yet to be decided.

In the closest final of the day, Hansjoerg Toll and Oh Yunkung overcame Ukraine’s Viktor Vasylevskyi and Nataliia Ostrovska, recovering from a two-game deficit to secure victory (5-11, 9-11, 11-8, 11-8, 11-4). In contrast, Andreas Fejer-Konnert and Margit Geiger won their title decider against Denmark’s Jan Søndergaard and Jette Vieg in straight games (11-4, 11-2, 11-4).

The tournament will conclude on Saturday 21st January with the men’s and women’s singles and doubles titles yet to be decided.