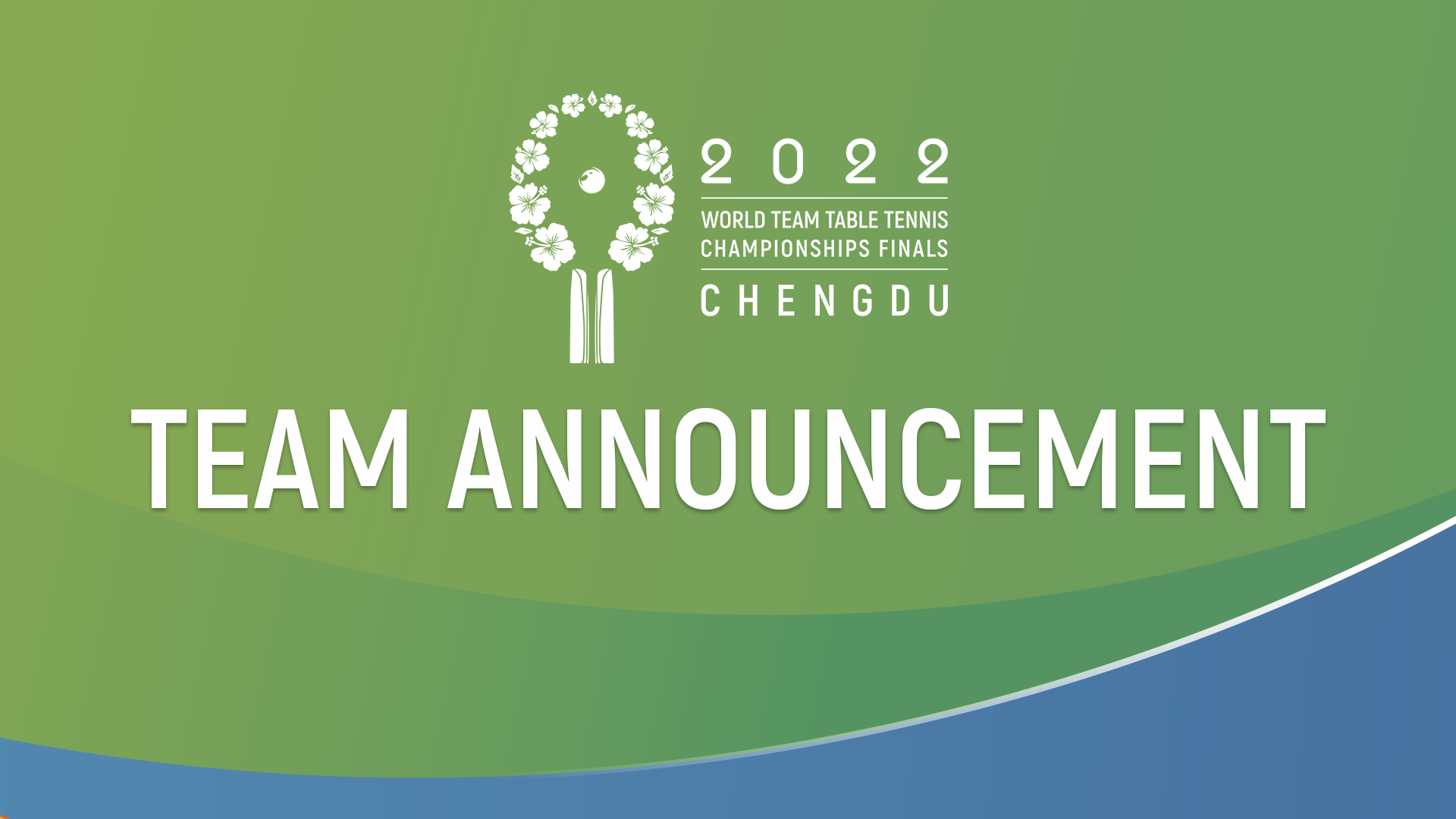 Less than a month to go to the opening of the 2022 ITTF World Team Table Tennis Championships Finals Chengdu; today, the ITTF unveiled the list of teams’ entries.

The following men’s and women’s teams will be vying for one of the sport’s most coveted titles.

The first stage draw is scheduled for Wednesday 28 September.

With the 2020 World Team Table Tennis Championships in Busan cancelled, it has been four years since the event was last held. China took gold in the men’s and women’s events in Halmstad, Sweden, in 2018.

Playing on home soil this year, China will once again be the favourite to win the Swaythling and Marcel Corbillon Cups. China has taken the men’s title on the last nine occasions, and will go in as top seed. Germany as World No.2 will be set on a breakthrough performance after making four finals in the previous five editions of the event. Meanwhile, Sweden was the last team outside of China to stand at the top of the men’s podium and having produced silver medalists in consecutive Men’s Singles World Championships will look for a return to their golden age.

In the women’s draw, China will be looking for its fifth consecutive title and enter Chengdu as the No.1 team in the world. A spot behind them is Japan who have won silver at the last three championships and will look to their legacy for inspiration as the second most successful women’s team of all-time. While the traditional continental powerhouses will be in action, Pan-America will also be eyeing the podium with the most teams from that region competing for the titles in the modern staging of the event. Africa will also be well represented and battling for medals with multiple teams ranked inside the Top 20 headed to Chengdu.

The teams will arrive in Chengdu on Monday 26 September via special flights chartered by the ITTF.

Participants at the World Championships Finals will be able to enter and leave Chengdu without quarantine. They will stay in a closed-loop management system, inspired by the one successfully experimented during the Beijing Games, official hotels being connected to the event venue via dedicated transport.

Preparations for delivering the 2022 ITTF World Team Table Tennis Championships Finals – the only international sports event in China this year after the Beijing 2022 Olympic and Paralympic Games – are a true organisational feat.

“As the countdown to Chengdu will soon come to an end, all members of the table tennis family should feel extremely proud.

“Proud that our sport is able to host a world class event in China, one of our members with a long, distinguished history. I thank the Chinese Table Tennis Association, the Local Organising Committee, and the City of Chengdu for making this event happen.

“Proud that so many teams are joining these World Championships Finals, facing more organisational and logistics challenges than usual. I want to thank the Member Associations and participants for their patience, understanding and support in the lead up to this event.

“Proud of the ITTF and World Table Tennis staff who have spared no efforts in the past months to ensure the successful delivery of our marquee event.”

“I am sure we will feel even more proud after the event concludes successfully. The World Championships Finals in Chengdu will be an unforgettable experience which, ultimately, will bring our family together, maybe closer than it has ever been.”
— ITTF President Petra Sörling

“A warm welcome to the world’s best 66 Men’s and Women’s teams; Chengdu is ready to receive you at the World Team Table Tennis Championship. The ITTF, CTTA and the Organising Committee are working on every detail to ensure a professional, safe, convenient and pleasant environment for all. I would also like to thank the table tennis family for their support in the lead up to this event. I believe Chengdu can become the link that deepens our friendship and brings us closer together. Finally, to all those who are departing for China soon: Welcome to Chengdu!”