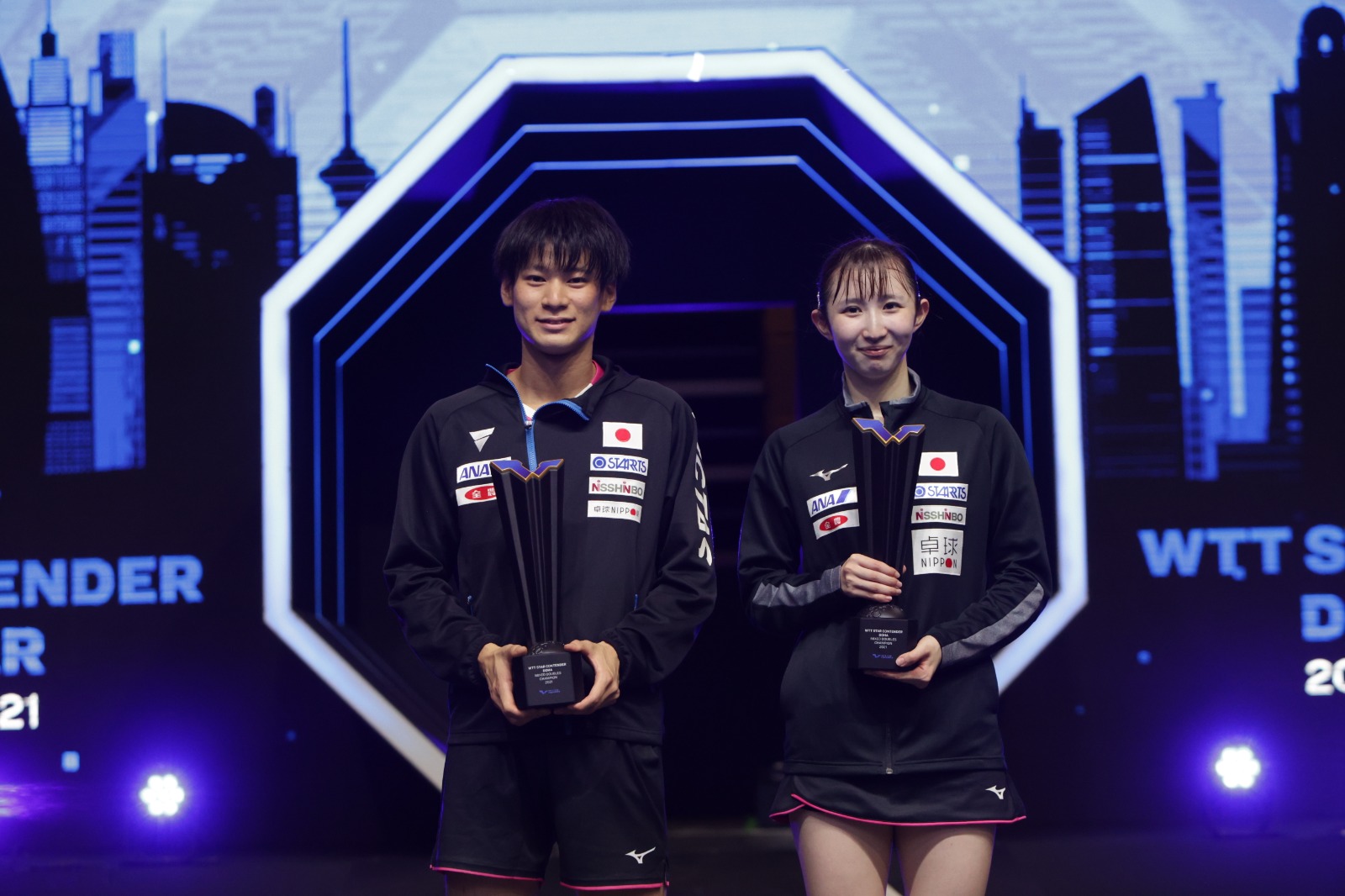 Togami, 20, and Hayata, 21, resumed their campaign at the semi-final hurdle where they impressively held off the second-seeded pair from Hong Kong, China, Wong Chun Ting and Doo Hoi Kem 3-1 (11-9, 8-11, 11-5, 11-6). Just one step away from glory, another fierce partnership awaited the Japanese pair in the final, the Republic of Korea’s Jang Woojin and Jeon Jihee. More than up for the challenge, Togami and Hayata outclassed the Korean combination across four games (11-6, 3-11, 11-2, 11-8) to lift the trophy.

“Having experienced Tokyo 2020 where the Japanese Team won Mixed Doubles, I’m very happy we managed to bag the Mixed Doubles title here. It’s great to be able to show what you’ve got at an international competition. As mixed doubles partners, we trusted each other and managed to win this. Hopefully we can put up our best performance again at the Asian Championships,” said Hina Hayata

“Paris 2024 is only three years away. I want to achieve something in these three years, so I’m very happy to have won this. My goal is to become the top Japanese player and lead Team Japan on the international stage. I’ll work hard towards that,” said Shunsuke Togami

Dimitrij Ovtcharov made headlines on day two following his early departure from the Men’s Singles draw. On day three, the Women’s Singles event nearly saw its top-seeded entry, Jeon Jihee, head for the exit. The Republic of Korea competitor refused to give up the fight despite trailing Thailand’s Suthasini Sawettabut 0-2, claiming the next three games on the bounce to keep her campaign on track (7-11, 8-11, 11-8, 15-13, 11-2). 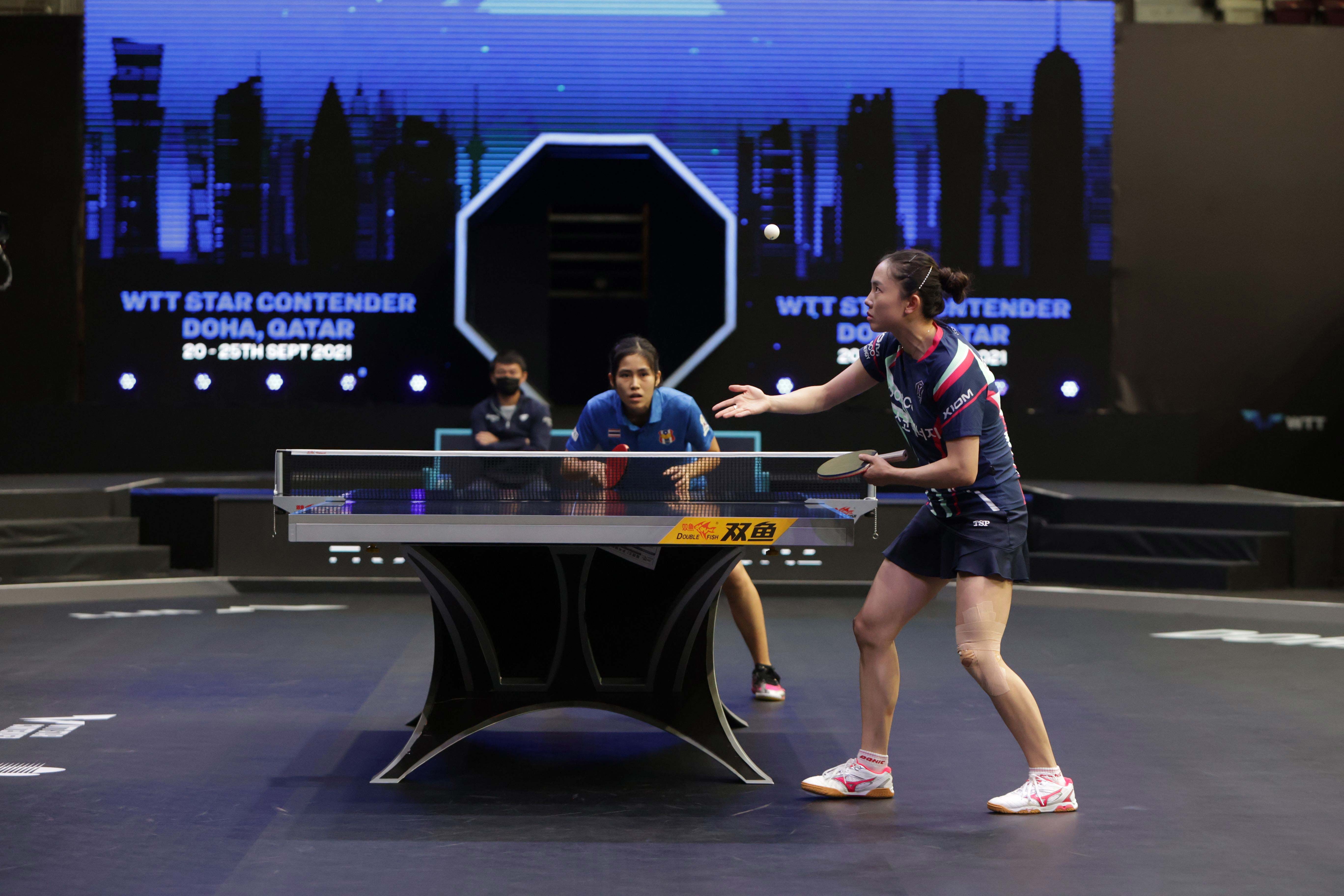 “I did all the preparation I could for this match, but it turned out to be tougher than expected. My opponent’s strokes were much faster and more aggressive than I imagined. At the start, the way I played was rather hesitant; it lacked boldness, especially in my serves. After losing the first two games, I thought, ‘why not just enjoy the rest of the match?’ That was also when I started to go all out,” said Jeon Jihee

An all-Japan affair would decide jeon’s next opponent as number six seed Hina Hayata met Minami Ando. Heading into the match off the back of two 3-0 victories, Hayata still boasts her perfect record come the close of day three, with Ando also proving unable to lay a finger on her compatriot (11-6, 11-8, 15-13).

“Every game was very difficult. Even though I was 2-0 up, I knew it was going to be tough. I made several mistakes and lost my concentration on a few occasions. When the score became 2-2, I told myself not to think too much about it anymore and restart again. I changed my tactics a bit, and luckily it worked out well,” said Margaryta Pesotska.

Over in the Men’s Singles event, the English lion roared loud and clear as Liam Pitchford showcased some of his finest table tennis to date. Pitchford seeded fourth, calmly saw off his sixth-seeded counterpart from Hong Kong, China, Wong Chun Ting in straight games (11-4, 11-7, 13-11) to signal his intent in the title race. 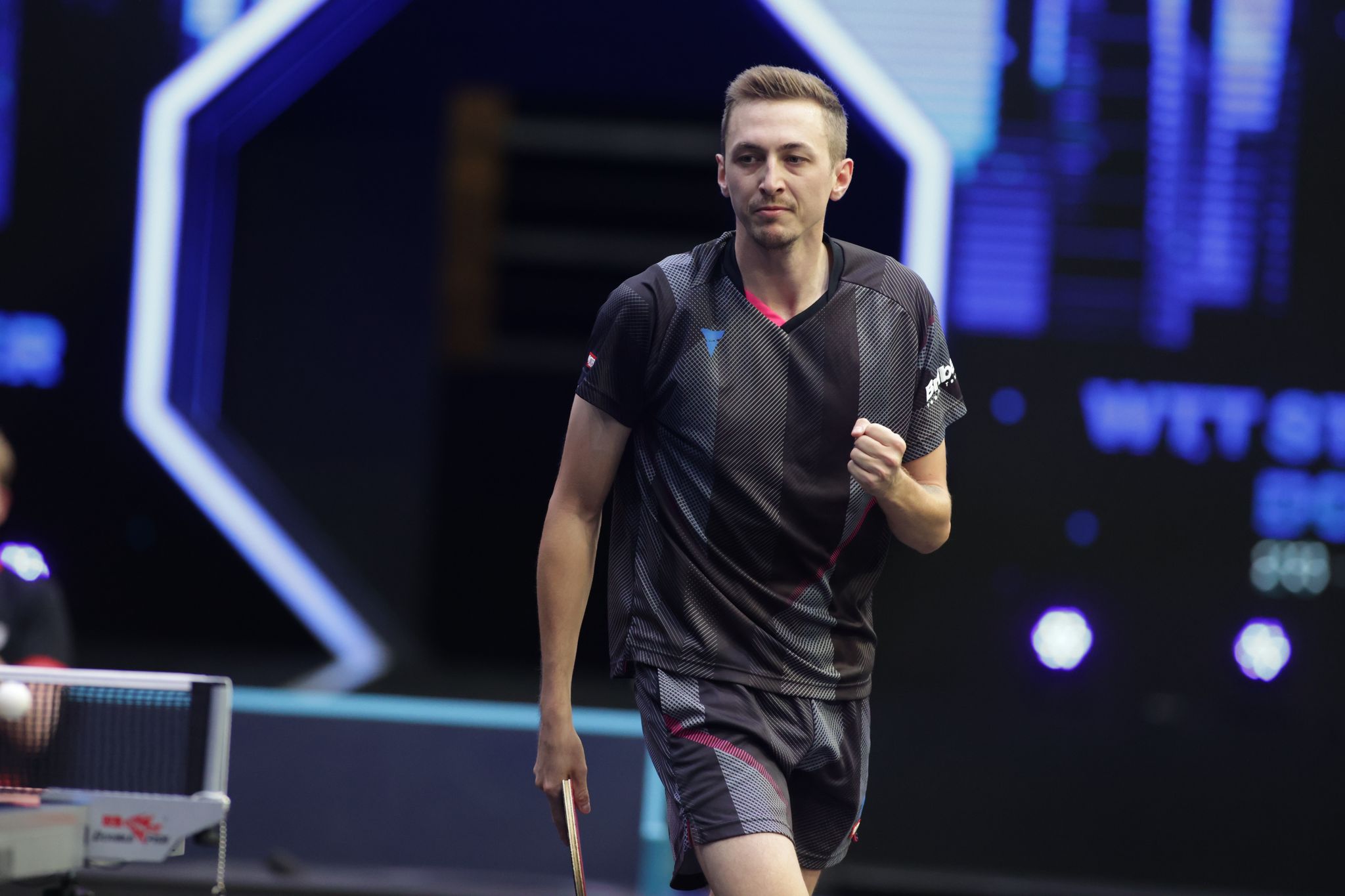 “To be honest, this was probably one of the best matches I’ve played in a long time. I knew what I needed to do against him. The tactic was to play more spin, try not to get into the faster rallies with him, and I think, for the most part, I did that well, so I’m pleased. I just tried to be as focused as possible, taking it one ball at a time, but I knew if I gave him a chance in the last game, he would take it, so I got a little nervous towards the end. I just kept doing what I needed to do, and I thought I was the better player today,” said Liam Pitchford

Latin American star Hugo Calderano took to the table straight after Pitchford’s masterclass display, and the second seed from Brazil produced a notable performance himself. Taking on French number five seed Simon Gauzy, Calderano was aware of the challenges he faced but wasn’t fazed by the size of the task. Recovering from a one-game deficit Calderano found a new gear, securing the next three games in a row to successfully turn the match on its head (8-11, 11-4, 11-3, 12-10).

“I feel very happy. I have lost to Simon a few times before. We know each other very well, so I knew the match was going to be very tough. As you could see, there were some very good rallies. I feel bad for him; I have lost against him before, but this time I won, and it’s good to be in the semi-finals. It took a while for me to find my rhythm, but fortunately, I managed to get the second game and played very well in the rest of the match. It was a good performance overall, and I’m very happy with my level,” said Hugo Calderano

Darko Jorgic leads the European charge in the upper half of the draw after the number eight seed from Slovenia dispatched Croatia’s Andrej Gacina 3-0 (12-10, 11-6, 11-9). The Republic of Korea’s Lee Sangsu, seeded seventh, awaits Jorgic in the last four following his mini-comeback win against Finnish qualifier Benedek Olah (11-13, 11-6, 11-8, 11-7).

Battling on multiple fronts, Liam Pitchford also caught the eye in the Men’s Doubles event after he and fellow Englishman Paul Drinkhall joined forced to see off Belgium’s Cedric Nuytinck and Slovenia’s Bojan Tokic 3-0 (11-7, 11-8, 11-7). Cho Seungmin and An Jaehyun were the other pair to claim passage to the final, beating Japan’s Yukiya Uda and Shunsuke Togami 3-1 (6-11, 12-10, 11-7, 12-10).

Japan will meet the Republic of Korea in the Women’s Doubles final after both countries experienced penultimate round success. Miyu Nagasaki and Minami Ando came up with the goods for the “Land of the Rising Sun,” sending home Singapore’s Zeng Jian and Lin Ye (11-7, 11-5, 12-10). Korean top seeds Yang Haeun and Jeon Jihee also required just the three games as they brushed aside Austria’s Karoline Mischek and England’s Tin-Tin Ho (11-4, 11-9, 11-7) with little difficulty.

Eight fixtures remain on the final day of play in Doha, with four titles still up for grabs on Saturday. Starting from 1100 local time, Jeon Jihee and Hina Hayata face off in the first of two Women’s Singles semi-finals, with Margaryta Pesotska and Doo Hoi Kem’s head-to-head following soon after. Then it’s the Men’s turn as Liam Pitchford takes on Hugo Calderano before Darko Jogic and Lee Sangsu do battle. The victorious semi-finalists will meet in the Women’s and Men’s Singles finals, slated for 1400 and 1430 local time.

Miyu Nagasaki and Minami Ando will then attempt to upset top seeds Yang Haeun and Jeon Jihee in the Women’s Doubles title decider from 1500, while the Men’s Doubles final pits Liam Pitchford and Paul Drinkhall against Cho Seungmin and An Jaehyun.