Fourteen days of enthralling table tennis action from the Tokyo Metropolitan Gymnasium have left a legion of table tennis fans spellbound as the Tokyo 2020 Olympic Games draw to a close.

From Syria’s Hend Zaza making her debut as the youngest Olympian to Japan creating history in the Mixed Doubles event. Germany underlined its dominance as Europe’s powerhouse and challenged the swashbuckling run of China. Table tennis action has captured the imagination of a global audience over the past fortnight.

History was first made at the table tennis competition when at 12 years of age, Hend Zaza (SYR) became the youngest Olympian in any sport since 1968 to compete in the Women’s Singles preliminary round for the first time.

Not since the 1968 Winter Olympics has the Games welcomed another youngster when 11-year-old Beatrice Hustiu competed in figure skating. Zaza inked her place in the record books when she qualified for the Tokyo Games by winning the West Asia qualifiers in Amman, Jordan at 11 years old and 56 days old in 2020.

Despite falling to a 4-0 defeat to Austrian veteran Liu Jia in 24 minutes, Zaza, who was her country’s flag bearer, was confident of making her return to the Games again as a more accomplished player.

“This is my first Olympics, and I’ll work harder for a better result the next time. It’s a good lesson for me. I was hoping for a winning match, a better play, but she (Liu) was a tough opponent, and it was a good lesson for me,” said Zaza of her 39-year-old rival, who is also a mother to a 10-year-old daughter. 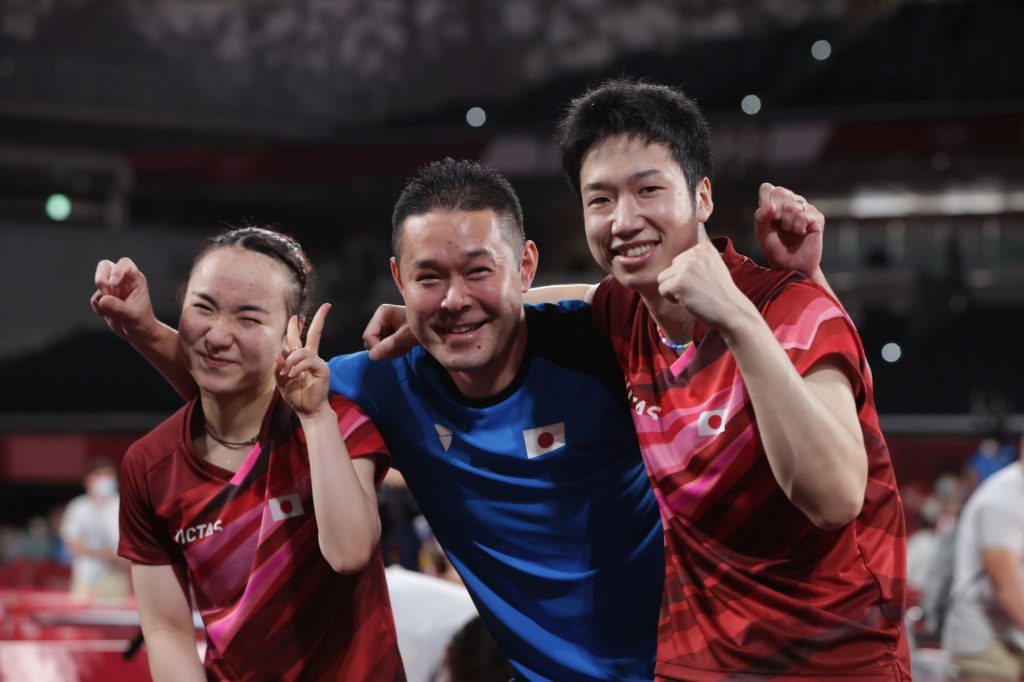 The third day of competition saw even more significant milestones as Jun Mizutani, and Mima Ito outplayed China’s Xu Xin and Liu Shiwen to win the gold medal for Japan in the inaugural Mixed Doubles event.

That historic victory meant the host nation had claimed its first-ever gold medal across all table tennis disciplines at the Olympic Games since the sport’s debut at the Seoul Olympics in 1988.

“I’m so proud. We knew the Chinese pair were very strong, and we knew we would have to give 150%! Even then, we weren’t sure if we would have enough to overcome them. I feel the Olympic Games is a special occasion,” said Mizutani

“I’m so, so happy! I just enjoy the Olympic Games so much because there are lots of unpredictable elements,” added Ito.

Upsets, unbridled joy and drama inside the courts continued to make the table tennis competition such a compelling spectacle.

Egypt’s Omar Assar went against the form books with his stunning upsets over Sweden’s Mattias Falck, followed by another big triumph over Chinese Taipei’s Chuang Chih-Yuan in the round of 16 of the Men’s Singles.

“I’m very proud of myself and also happy with the support I got from my family. They woke up so early in Egypt and Germany. Making my son wear a shirt with the logo of Egypt. It is really nice. To be able to play in the quarter-final is a very big thing for me,” said Assar.

The Egyptian became the first player from an Arabic-speaking country to reach the Men’s Singles quarter-final, where he would eventually bow out after falling to China’s Ma Long. 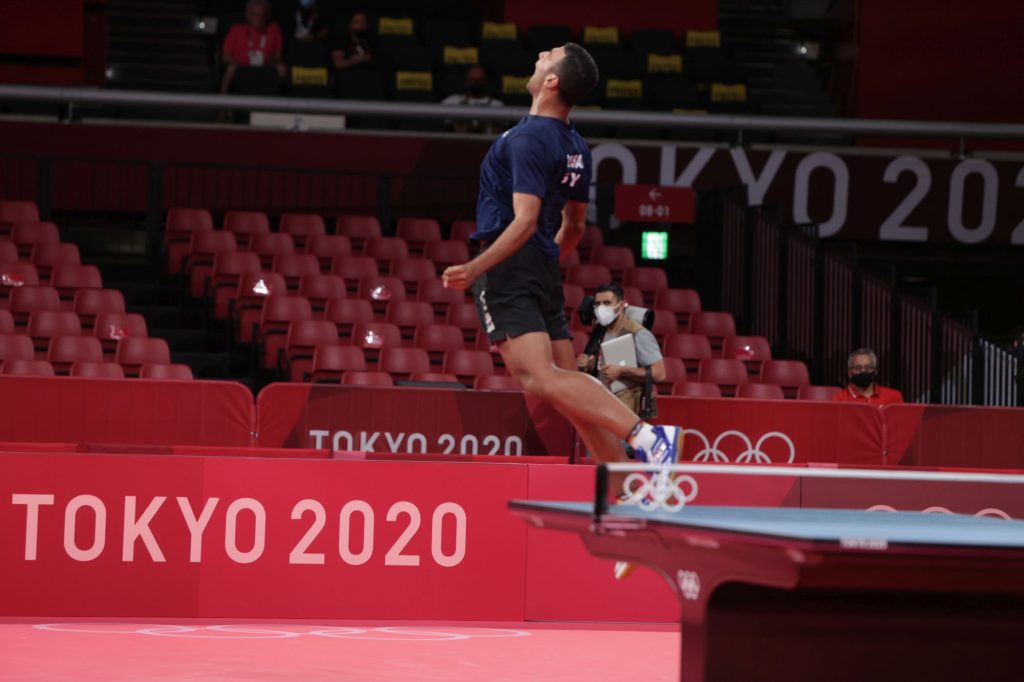 Whilst there was joy for the Egyptian, it was the reverse for Japan’s Tomokazu Harimoto. He was left stunned by his round of 16 defeat to Slovenia’s Darko Jorgic.

Seeded 18th, Jorgic made a mockery of the rankings and dashed the third-seeded Japanese teenager’s dreams of landing a gold medal on home soil.

“It’s just an amazing feeling for me to beat Harimoto in his own country and be in the quarter-final. I prepared well with my coach. I was fighting for every point, and this was my goal,” said Jorgic.

Ito became the first player from Japan to win a Women’s Singles medal at the Olympic Games following her win over Singapore’s Yu Mengyu in the bronze medal match. Top seed Chen Meng from China had an Olympic Games debut to remember as she won the gold medal by defeating compatriot Sun Yingsha in a breath-taking final.

Another golden moment would come for Ma as the Chinese legend outplayed teammate Fan Zhendong in an epic Men’s Singles final showdown to become the three-time World Table Tennis Champion and the first man to defend the Olympic gold medal.

Ma’s victory over Fan, the world number one, quashed all debate on who is the greatest table tennis player of all time.

“It’s nice to see all the compliments about me. I want to continue playing table tennis for as long as I can. I like to thank my team and my family for their support and encouragement all these years,” said Ma in his victory speech.

Germany’s Dimitrij Ovtcharov also savoured moments of his own when he overcame Lin in a seven-game thriller to secure the singles bronze medal after battling to save four match points.

It was Ovtcharov’s second Olympics medal after his bronze in 2012 and sweet relief for the 32-year-old who had contemplated retiring from the sport after his heart-breaking semi-final loss to Ma.

“I truly feel the last four days felt like five years. I called my dad and my wife and said I never want to play table tennis again. It’s really too hard. But they gave me so much strength, and my dad said to me that if I’m going to win again today, the world will be great again. But yesterday evening, I didn’t even believe I could lift a racquet again,” said an emotional Ovtcharov

Minnie Soo Wai Yam was undoubtedly the star for Hong Kong, China. She displayed incredible spirit and determination to help win the Women’s Team bronze medal and first Olympic medal since 2004. The fourth-seed women’s team battled against all odds to pull off an upset over Germany, who were seeded third.

“It’s totally unbelievable and the best day of my life. I’m really happy to have done my part in clinching the winning point for us. We have been improving in every match, and we were confident despite going down in the first match,” said Soo. 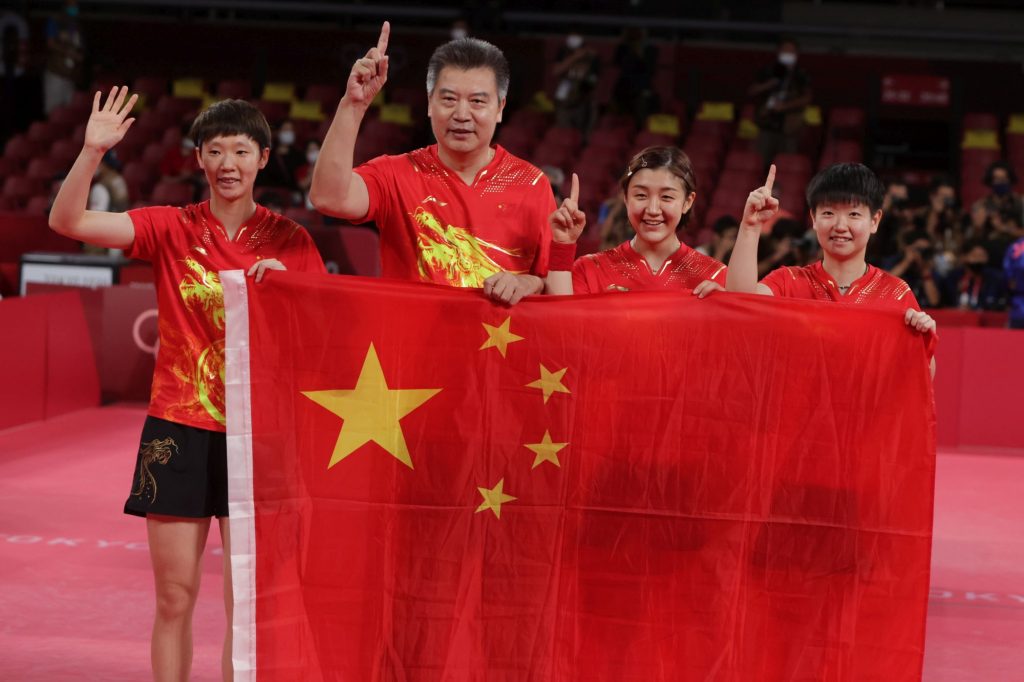 The women’s team from China continued to prove why they are the best in the world after overcoming an impressive Japanese team of Ito, Kasumi Ishikawa and Miu Hirano. They were simply unstoppable on their day as they collected their women’s team gold for the fourth time, maintained their perfect record of not losing a single team match in Olympic history.

“We prepared ourselves well for the final, and we played really well. This gold medal goes out to everyone who has supported me, the team, coaches, fans and everyone who has played a big role in my development, especially my family. This is also our gift to China,” said Sun Yingsha.

Despite her loss, Ito earned more accolades as she became the first-ever table tennis player to win all three gold, silver and bronze medals at the Olympics.

The Men’s Team gold medal once again belonged to China after the top seed extended its 100 per cent winning record in the event with victory over second seed Germany. With China’s achievement, Ma has also become the most decorated table tennis Olympian in history with a record of five gold medals.

“We have done well consistently because of the excellent support from all the backroom staff, coaches and technical team. It’s a team effort that has kept us at the top of the game for so long. As professional athletes, we have only got one job to do, and that is to win,” said Ma Long.

“It has been a very memorable journey for us these past two weeks. I struck a really good partnership with Ma Long. We trusted each other and got the job done. We hope to inspire more people with our success and become good role models too,” said Xu Xin. 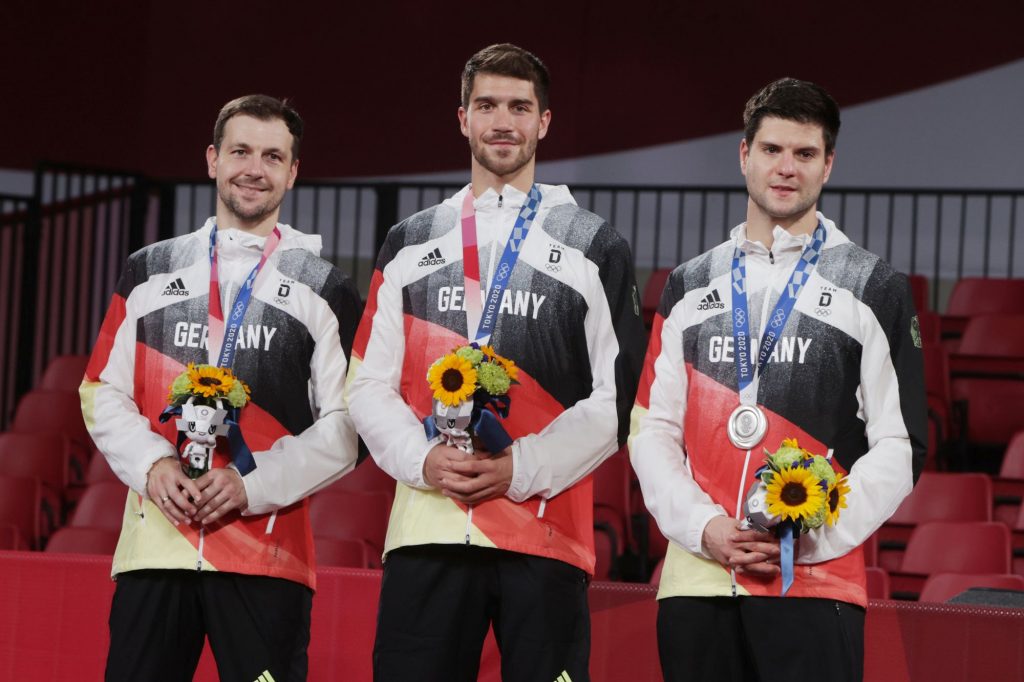 Germany has also shown why they are considered Europe’s strongest with a silver medal in the bag. They have been in the top three position ever since the Team event was introduced at the Olympic Games in 2008.

The Tokyo 2020 Olympic Games may be drawing to a close, yet table tennis fans can already look forward to more action as WTT events return with WTT Contender Budapest from 15-20 August Olympic stars including Liam Pitchford, Quadri Aruna, Assar, Xiaoxin Yang, Georgina Pota, Manika Batra and Paulina Vega will all be back in action.

Successfully launched in 2021, WTT heralds a new era for professional table tennis with the new WTT Series showcasing the sport’s best and up-and-coming table tennis players in up to 34 events worldwide. The WTT Series features four Grand Smashes as the pillars of the support. Eight single-table, single-gender WTT Champions events, the WTT Contender Series and the season-ending WTT Cup Finals, all of which will entertain fans and inspire future generations of table tennis players. Complemented by the global WTT Youth Series and WTT Feeder Series, WTT creates a pathway that showcases a player’s journey from day one to World No. 1 through the ITTF Table Tennis World Rankings. For more information, please visit worldtabletennis.com.