Heartache for Simon Gauzy after the Frenchman came close to a famous win over Fan Zhendong, only to fall short against the Men’s Singles silver medallist in a five-game thriller. The defeat carried great disappointment for Gauzy and France as top seed China negotiated the remaining fixtures with little difficulty. Xu Xin powered past Emmanuel Lebesson 3-0 in the other singles match, having also partnered Ma Long to another 3-0 win in the doubles, with Lebesson and Alexandre Cassin unable to keep pace. China prevails 3-0 and rightly takes its place in the last four of the Men’s Team draw.

“We knew the French players are always improving and we were wary of them, but we played to our strengths, and we combined well with each other. We just had that self-belief which was important. We did not let our guards down and continue to fight for every point. We did not give up when we were trailing. We are just glad to have the job done and looking forward to the next match now. It’s going to get tougher from here as everyone wants to beat us, but we just need to prepare ourselves well and ultimately bring glory for China,” said Ma Long, Fan Zhendong and Xu Xin

“I’m proud of what we gave today as it’s so tough to play against them. I won’t be surprised if China wins this tournament again; they are great. I gave my best. I think I played a great game and had a few chances but didn’t take them. We are happy to have them in our sport; they put our sport at a very high level and push us to give our best. It’s crazy how good they are!” said Simon Gauzy 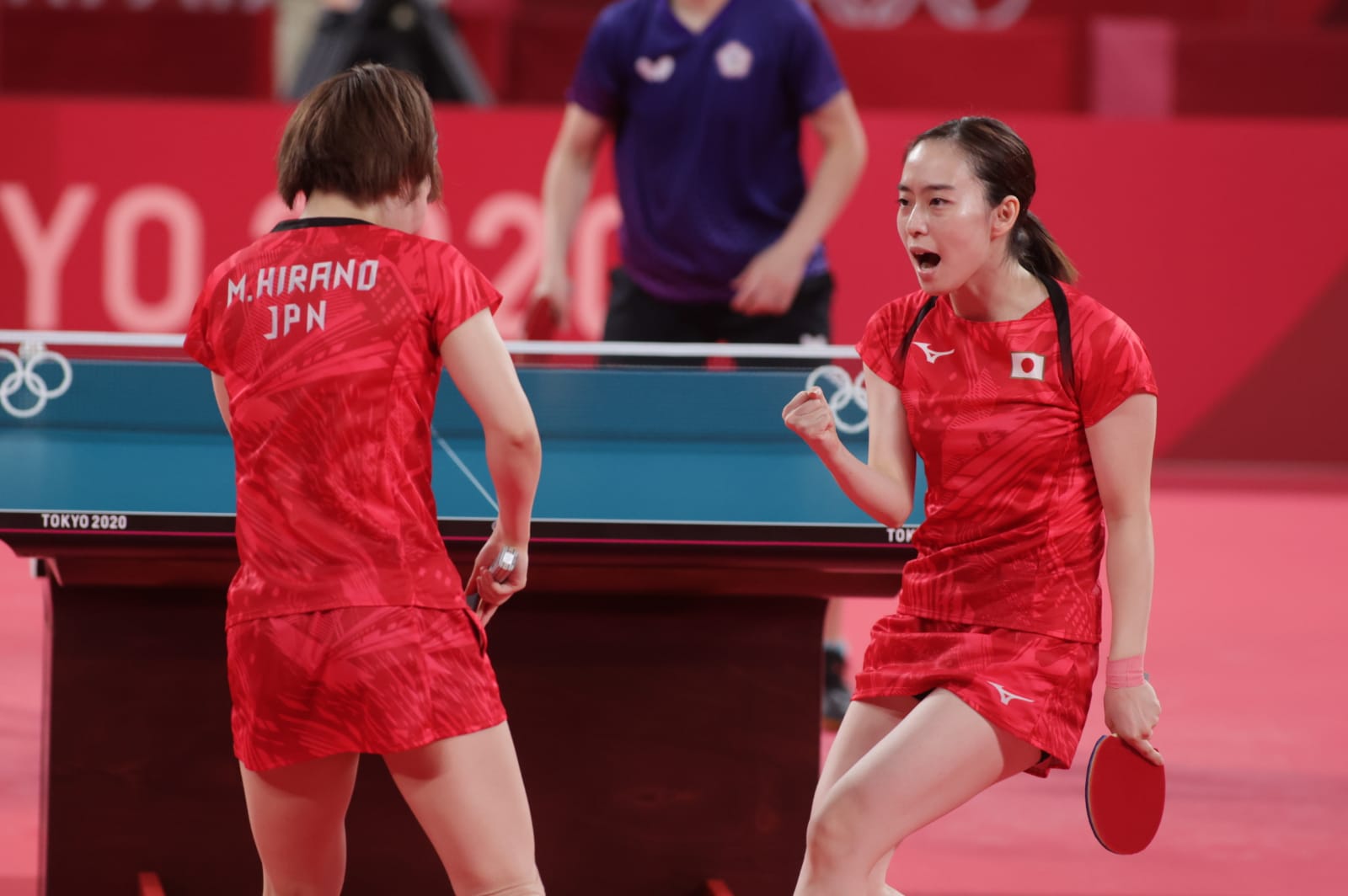 Another win for hosts Japan

So far, so good for Japan in the Women’s Team draw after the host nation secured its spot in the semi-finals with a staggering 3-0 victory over Chinese Taipei. Opening the match with a 3-0 doubles success for Kasumi Ishikawa and Miu Hirano against Cheng Hsien-Tzu and Chen Szu-Yu, Japan then extended its lead through Mima Ito, who needed just the three games to see off Cheng I-Ching. The third encounter pitted Hirano against Chen in a must-win affair for Chinese Taipei, but it was Hirano who prevailed 3-1 to send Japan through. 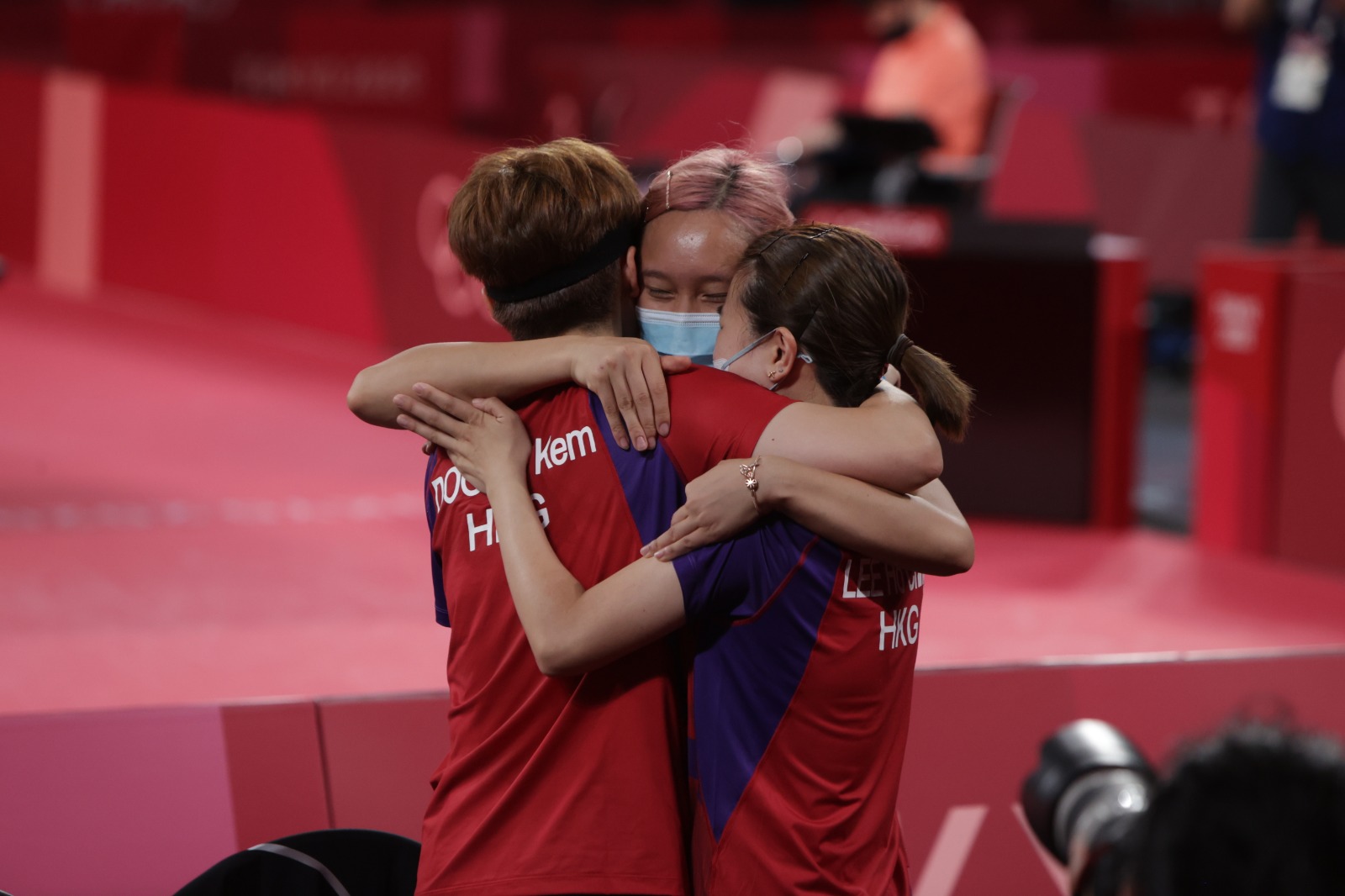 Hong Kong, China overcame an opening 3-2 defeat in the Women’s Team doubles match before securing the next three points to seal their passage into the semi-final. Soo Wai Yam Minnie and Lee Ho Ching fell to the Romanian pair of Daniela Dodean and Elizabeta Samara early before Doo Hoi Kem rescued a point for Hong Kong, China with a 3-0 win over Bernadette Szocs in the following singles match. Lee then redeemed herself with a comprehensive 3-0 victory over Samara in the third match. Doo returned quickly into action again and showed her prowess by dispatching Dodean in 23 minutes to ensure progress and victory for Hong Kong, China.

“We really encouraged each other and just told ourselves not to put too much pressure on ourselves in the teams event, we don’t have a second chance as it is straight elimination. So, we have just got to play to the best of our abilities. Whichever team we meet next is going to be a strong opponent, so we just have to continue doing our best,” said Doo 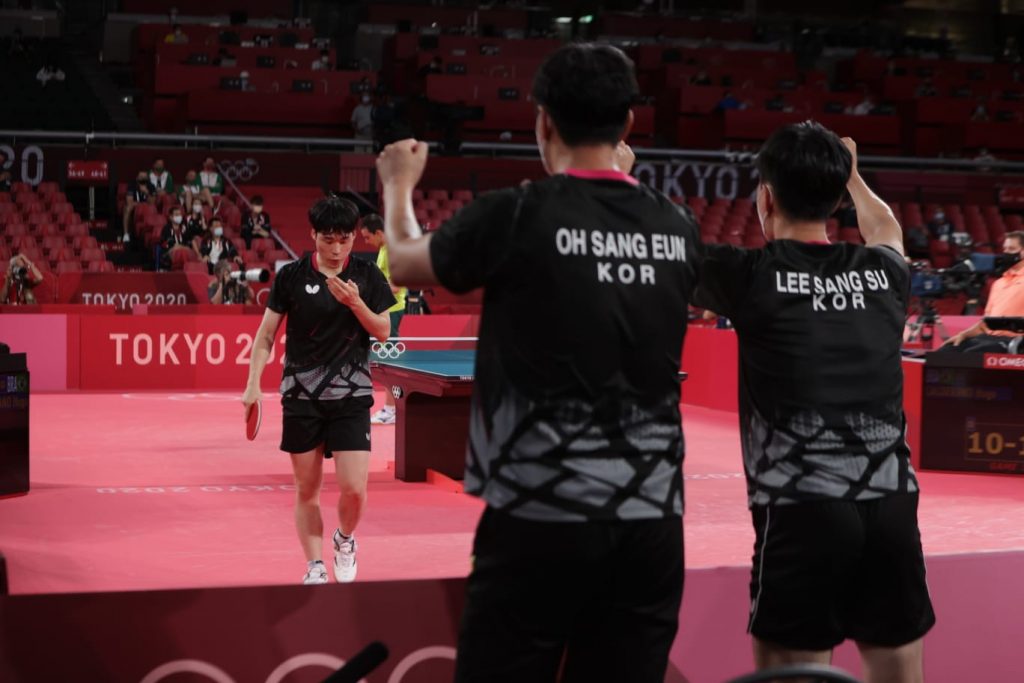 Brazil outplayed by the Republic of Korea

The men’s trio of Lee Sangsu, Jeoung Youngsik and Jang Woojin completed a day of victories for the Republic of Korea as they beat Brazil 3-0 to progress to the semi-final of the Men’s Team event. Like their women compatriots, the men also enjoyed a resounding victory where they proved too strong for the Brazilians. Lee and Jeoung took down Vitor Ishiy and Gustavo Tsuboi in the opening doubles match 3-0. Jang secured the next point for the Republic of Korea by winning 3-0 against Hugo Calderano in the next singles match before Jeoung fought tooth and nail for the winning point before he triumphed over Tsuboi 3-2 in the third and final match.

“We played really well today, and we were really prepared for this match with Brazil. I was very determined to fight and secure the points for my country in the third game. It was tough as it could have gone either way with Tsuboi. I’m happy I managed to get the job done as he’s a top player and can still be dangerous even when he’s injured,” said Jeoung 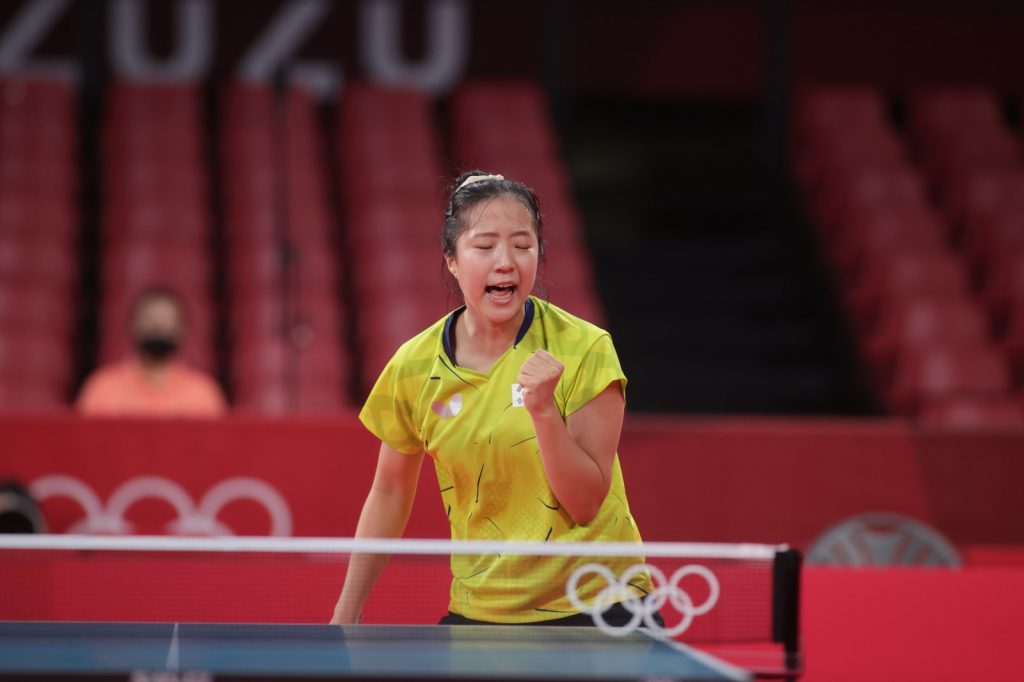 The Republic of Korea got off to a good start in the Women’s Team round of 16 when they beat Poland 3-0 to progress to the quarter-final where they will take on Germany. Choi Hyojoo and Shin Yubin was pushed to the distance by Natalia Partyka and Natalia Bajor in a five-game thriller but eked out a hard-fought 3-2 win to get the first point for the Republic of Korea. Jeon Jihee had an easier match as she was quick to take down Li Qian 3-0 in 25 minutes in the second singles match. Shin sealed victory for the Republic of Korea, but not before labouring to a 3-2 win against Partyka, who came back from 2-0 down to level the score to 2-2, before falling 5-11 to her. 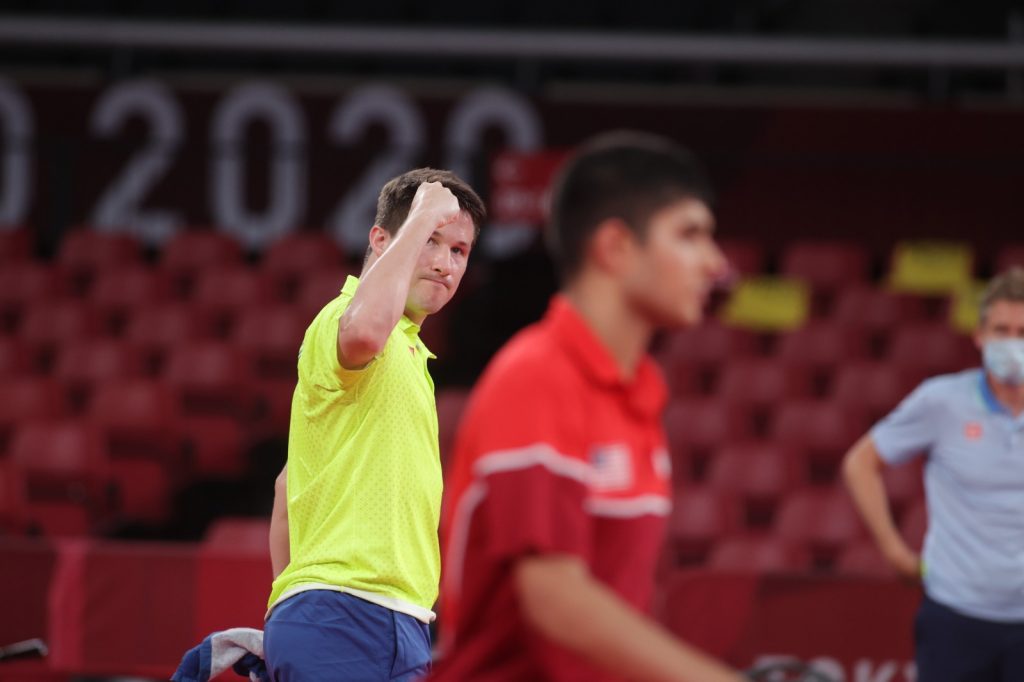 Sweden takes down the United States of America

The United States of America was shown the early exit in the Men’s Team event after losing 3-1 to Sweden in the round of 16. Kristian Karlsson and Anton Kaellberg grabbed the early point for Sweden with a 3-0 win over Nikhil Kumar and Zhou Xin in the opening doubles match. American Kanak Jha levelled the score to 1-1- after beating Mattias Falck 3-1 in the next singles match before Kaellberg swung the advantage back to Sweden with a 3-0 win over Zhou. Karlsson then ended all hopes of a comeback by the Americans by beating Jha 3-0 in the fourth singles match.

“We are happy with our performance. It was our first match in the Team’s event and that has settled our nerves. They have very good players, and we went in with full focus and with a lot of respect for them. We did exceptionally well, we trust one another and we did a very good job today,” said Karlsson. 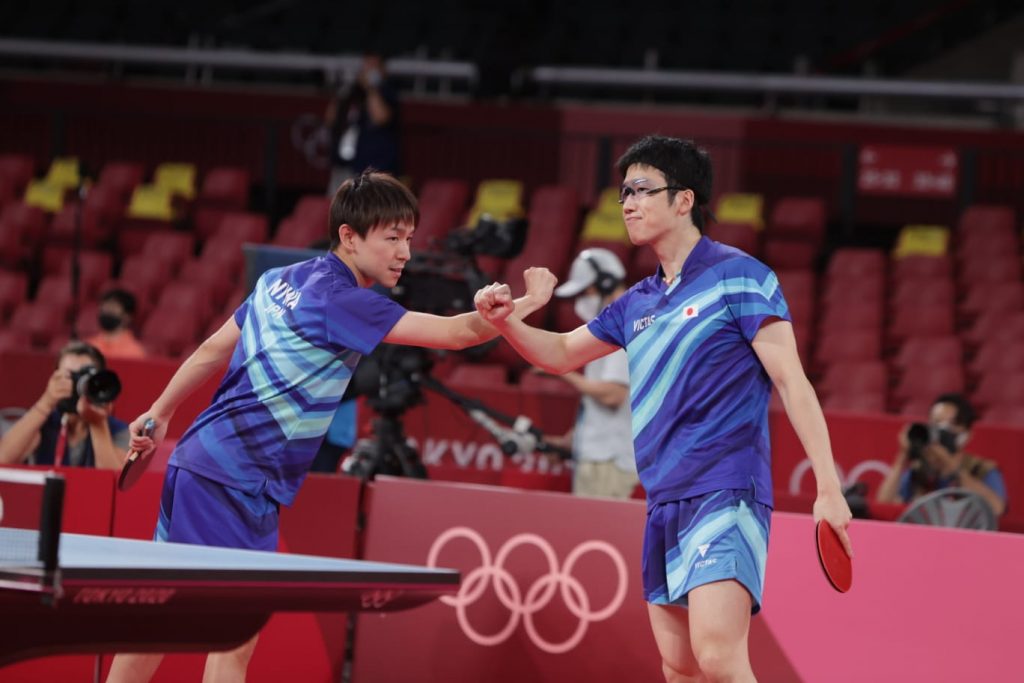 Japan’s men’s trio of Koki Niwa, Jun Mizutani and Tomokazu Harimoto beat Australia 3-0 in a straightforward victory that sees them advance to the quarter-final. Seeded third, Japan proved too strong for their rivals, who are seeded 16th. Australia’s Hu Heming and Yan Xin could not find an answer to combat Niwa and Mizutani’s speed and aggression in the opening match as they went 3-0 down in 16 minutes. Harimoto, who suffered a shock exit in the Men’s Singles round of 16, redeemed himself with an assured 3-0 victory over David Powell to extend Japan’s advantage to 2-0 after the second match. Mizutani then gave Japan the well-deserved win, closing out the third and final match 3-0. 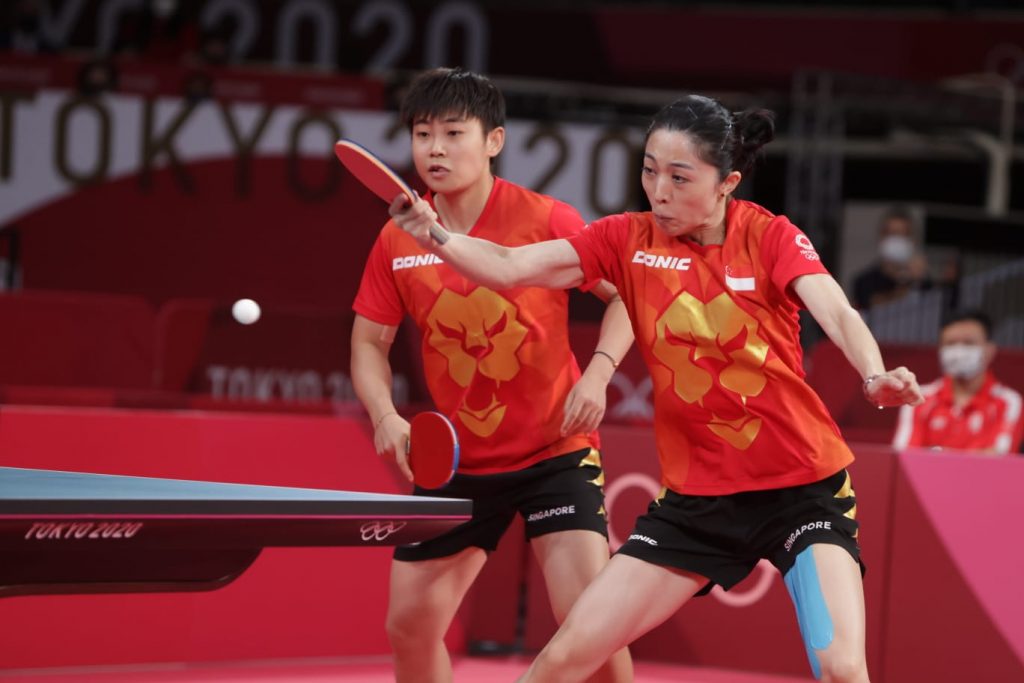 Singapore through to quarter-final where China awaits

Singapore passed their opening test in the Women’s Team event with a 3-0 win over France to set up a quarter-final clash with China. Yu Mengyu and Lin Ye dispatched Stephanie Loeuillette and Yuan Jianan in the opening doubles match 3-0. However, what looked like a straightforward match between world number nine Feng Tianwei and Prithika Pavade, ranked 381 places below Feng, turned out to be a nail-biting one. The teenager, who is celebrating her 17th birthday today, made a mockery of the rankings by racing to a 2-0 lead. Feng had to dig deep, and her experience showed when she eventually prevailed 3-2. Yu Mengyu, who reached the semi-final of the Women’s Singles clinched victory for Singapore when she beat Yuan 3-1 in the third match.

Host nation players depart but richer for the experience

Educate and Engage; Japan’s 20-Year Path to Striking Gold On and Off the Table