Chen Meng is the Olympic Champion!

The Women’s Singles final is living up to expectations, with China’s Chen Meng and Sun Yingsha playing out a pulsating start. With little to separate the two, 20-year-old Sun made a dream start to take the early lead, but Chen wasn’t willing to let the deficit grow and ties it up straightaway. Two games played and nothing between the two so far. 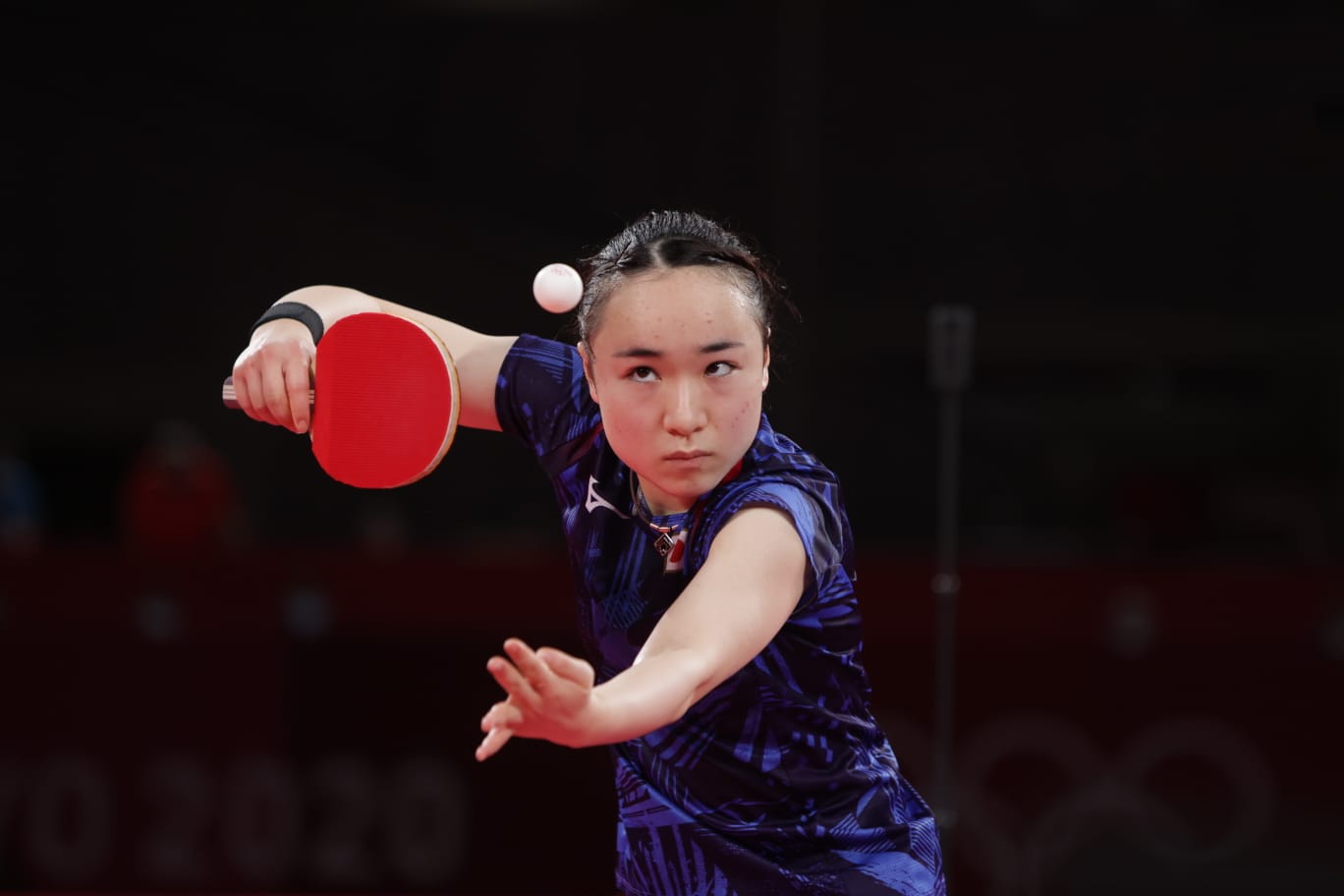 Mima Ito has become the first player from Japan to win a Women’s Singles medal at the Olympic Games following a fine showing from the number three seed in the bronze medal match. Making a slow start, Ito did well to respond immediately and never looked troubled from that point, beating Singapore’s Yu Mengyu across five games (6-11, 11-8, 11-7, 11-7, 11-6). Defeat for Yu, but the number 26 seed will be delighted to have progressed as far as she did, completely outperforming expectations in Tokyo.

“This medal is very important but my first goal was to get to the final. I have mixed feelings of frustration and anger because it’s not really perfect. I prepared myself really well for that match against Sun and I tried really hard to get into the final, but I could not do it. I’m looking forward to the Team’s event now. I hope to use my frustration, disappointment as a form of motivation and do well in then,” said Ito 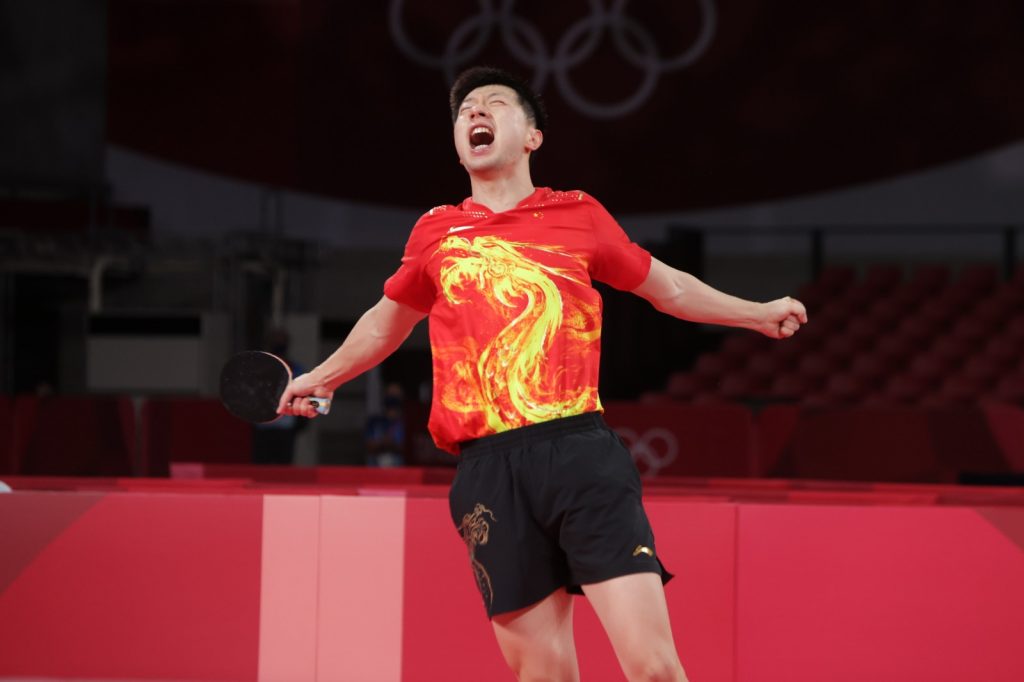 China’s Ma Long was pushed hard by Germany’s Dimitrij Ovtcharov in the Men’s Singles semi-final but eventually prevailed as the ‘Dragon’ turned on his afterburners to beat the German 4-3 (13-11, 11-8, 9-11, 9-11, 11-7, 5-11, 11-9). Ma and Ovtcharov traded blow for blow in the titanic contest, which both were determined to win. Ma, the second seed, started well against the 10th seed German by winning the first and two games. Ovtcharov stormed back by taking the third and fourth game to level the match 2-2.

Ma, a three-time Olympic gold medallist, won the fifth game before Ovtcharov slammed the brakes on Ma’s momentum by winning the sixth game to take the match to the decider. The tussle between Ma and Ovtcharov continued in the seven-game thriller, and it was Ma who eventually reigned supreme as he won the game 11-9 to set up a showdown with compatriot Fan Zhendong in the final.

“The match is not won until the very last point. There are no easy matches at the Olympics. I may have beaten Ovtcharov many times but for him to make it to the semi-final also shows he cannot be underestimated. I’m happy I was able to beat him again today,” said Ma.

“I’m really disappointed. This was my lifelong opportunity in my sporting career to reach the Olympics final. I really prepared myself well for the Olympics. I was truly convinced that I could beat Ma Long today. I did all I could but unfortunately, it was not good enough,” said Ovtcharov. 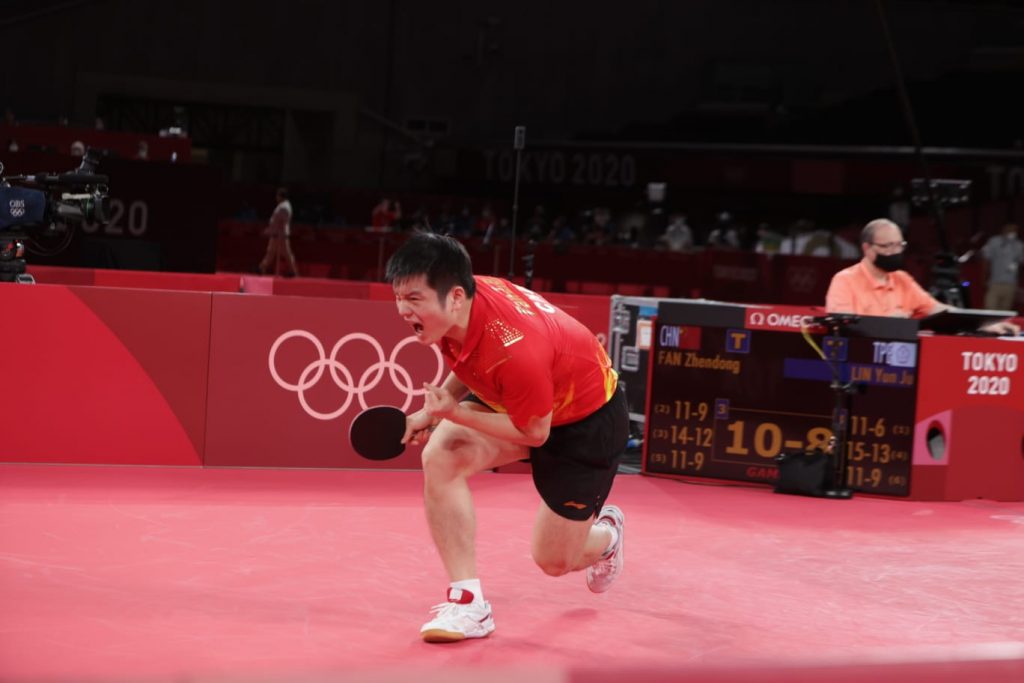 World number one Fan Zhendong of China was pushed the distance by Chinese Taipei’s Lin Yun-Ju before emerging triumphant in a pulsating semi-final match that had all the hallmarks of an epic table tennis battle. 19-year-old Lin fired the first salvo by winning the first game 11-6. But Fan won the second game 11-9 and pulled further ahead 2-1 after taking the third game 14-12.

The match shifted back to Lin’s momentum after the teenager won the fourth game to level the match 2-2. Fan regained control in the fifth match before Lin won the next game to bring the match down the wire. Fan finally broke Lin’s stiff resistance when he won the decider 11-8 to close out the match in 85 minutes.

“This is my first Olympics and I’m really happy to have made it into the final. Lin was a tough opponent and I really respect him,” said Fan.

Lin said: “Fan was the better player today and he deserves all the credit. I would like to congratulate him for making it into the final.” 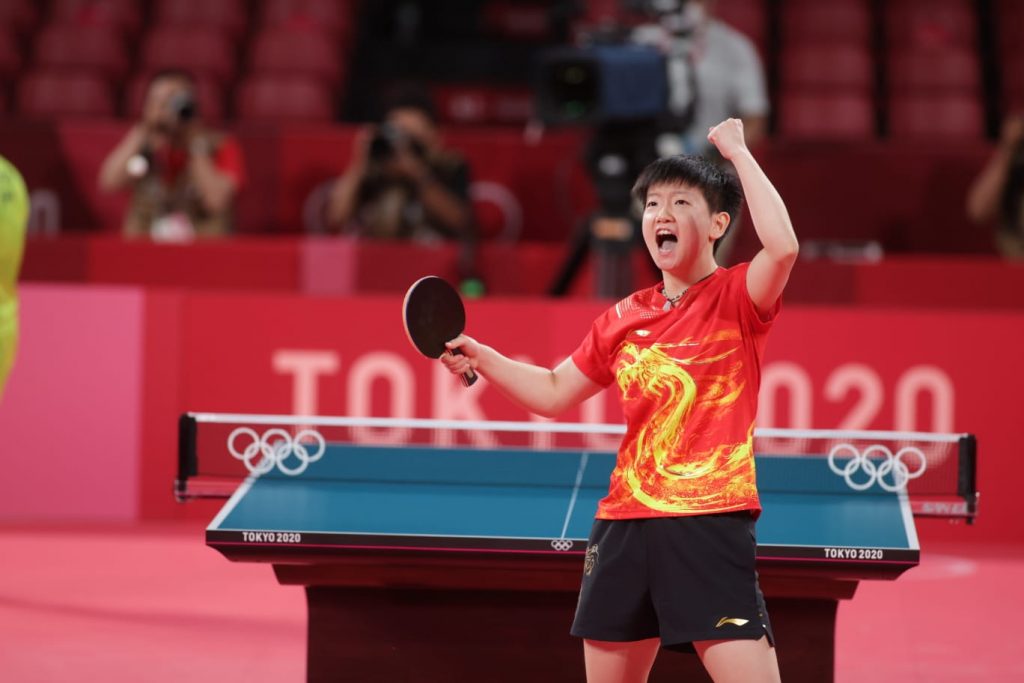 Sun Yingsha engineered a commanding performance as she took down Mima Ito of Japan 4-0 (11-3, 11-9, 11-6, 11-4) in their semi-final clash. The number two seed Chinese has won six of the last eight meetings against Ito, who is seeded one spot below Sun. 20-year-old Sun, who is just 14 days younger than Ito, took control of the match early by winning the first game 11-3.

She stormed to a 5-0 lead in the second game before Ito fought back to 9-9. However, the Chinese was too fast and decisive in her strokes and snatched the next two points to go 2-0 up. Sun would go on to make it an All-China with Chen as she outplayed Ito 11-6, 11-4 in the third and fourth game.

“The turning point came in the second game as it could go either way. I fought for every point and did not give up as I wanted to extend my advantage after winning the first game. Mima has already won the Mixed Doubles gold medal, and she’s a very good player. I knew it was not going to be an easy match and just told myself to play my own game and be focused,” said Sun 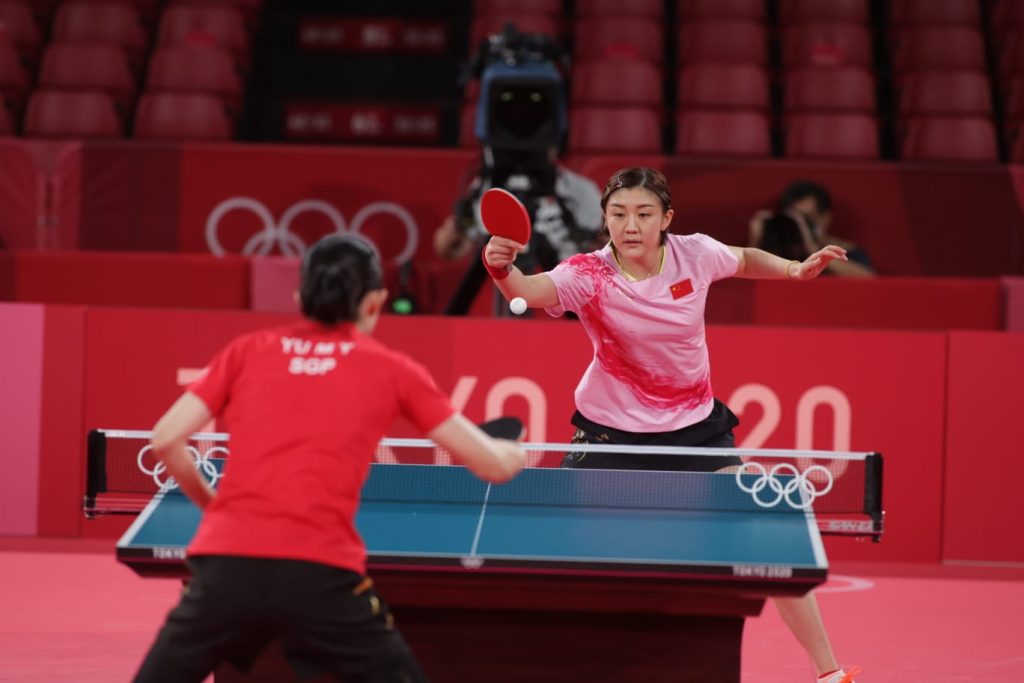 Chen enjoyed a 2-0 advantage over Yu in their head-to-head record and last played each other at the 2019 Hungarian Open. She extended that winning record over Yu with her quick and aggressive style play, which proved too strong for the Singaporean

Chen, who is making her Olympics debut, started aggressively by taking the first game 11-6 in nine minutes. The Chinese came out strongly again in the second game by racing to a 6-0 lead before Yu staged a comeback, winning eights points to take the game to 8-10. Chen then called for a time-out which proved crucial as she took the second game, 11-8.

Despite taking an early lead in the third game, Chen showed her dominance again, winning the game in seven minutes. Yu then suffered what appeared to be a leg injury when she was 2-4 down in the crucial fourth game. After receiving medical attention, Yu continued her battle, winning three consecutive points to tie the game at 5-5. But the world number one once again outplayed the Singaporean by clinching the decider 11-6 to book her place in the Women’s Singles final.

“I’m very pleased with how I played today. I was focused and fought for every point. I’m looking forward to the final tonight and hopefully, I can play well again,” said Chen.

City of Copenhagen Invests in Table Tennis for Senior Citizens