Table tennis action at the Tokyo 2020 Olympic Games is underway at the Tokyo Metropolitan Gymnasium on day two. Follow us here as we bring you all the day’s highlights. 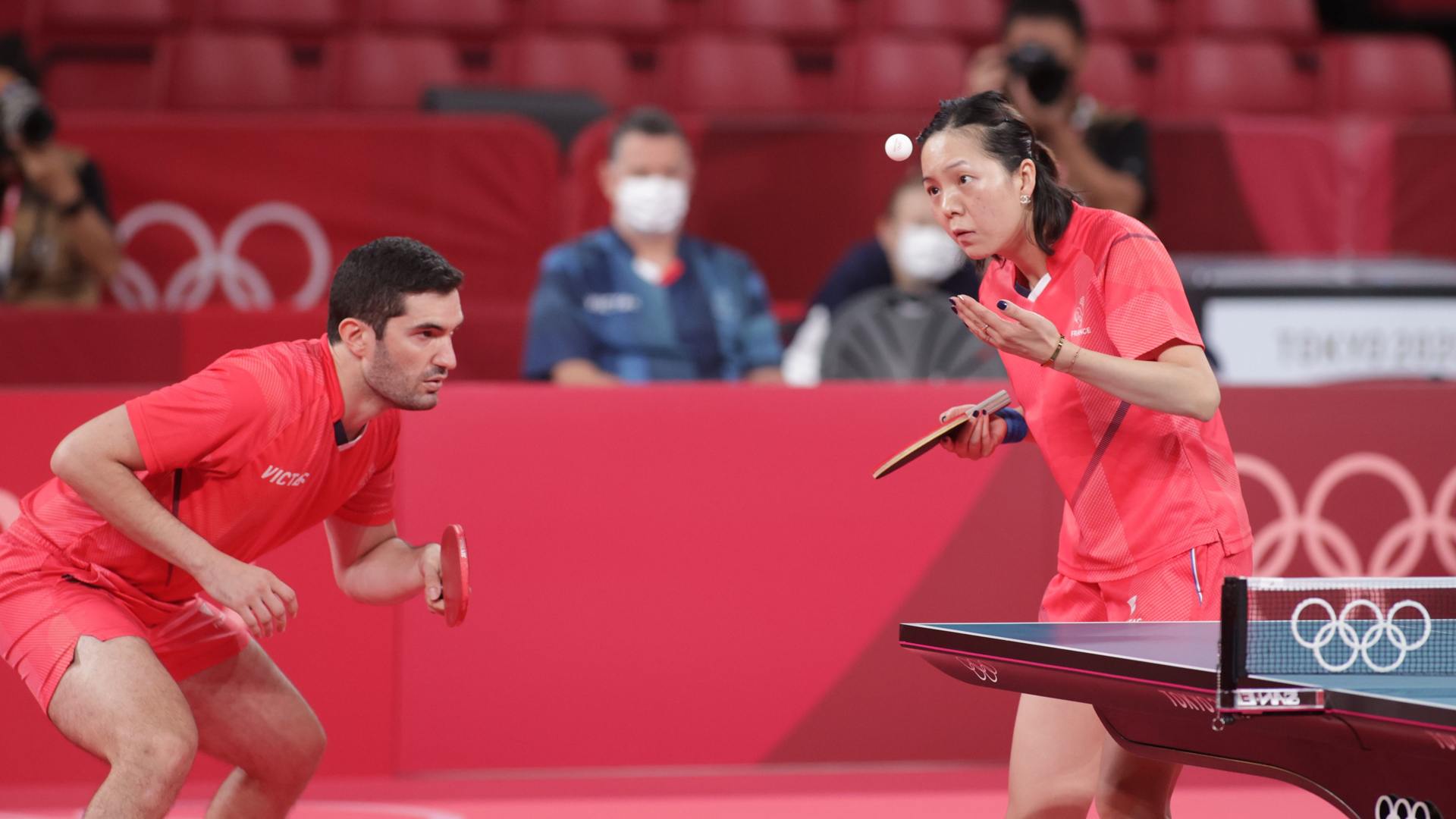 Japan’s hopes of landing a dream gold medal in the Mixed Doubles event are still very much alive after second seeds Jun Mizutani and Mima Ito secured their passage to the final. The closing fixture of the day didn’t disappoint with the Japanese pair’s opponents Lin Yun-Ju and Cheng I-Ching giving it a real go, but ultimately number three seeds from Chinese Taipei fell short across five thrilling games (11-9, 6-11, 11-9, 11-6, 11-6). 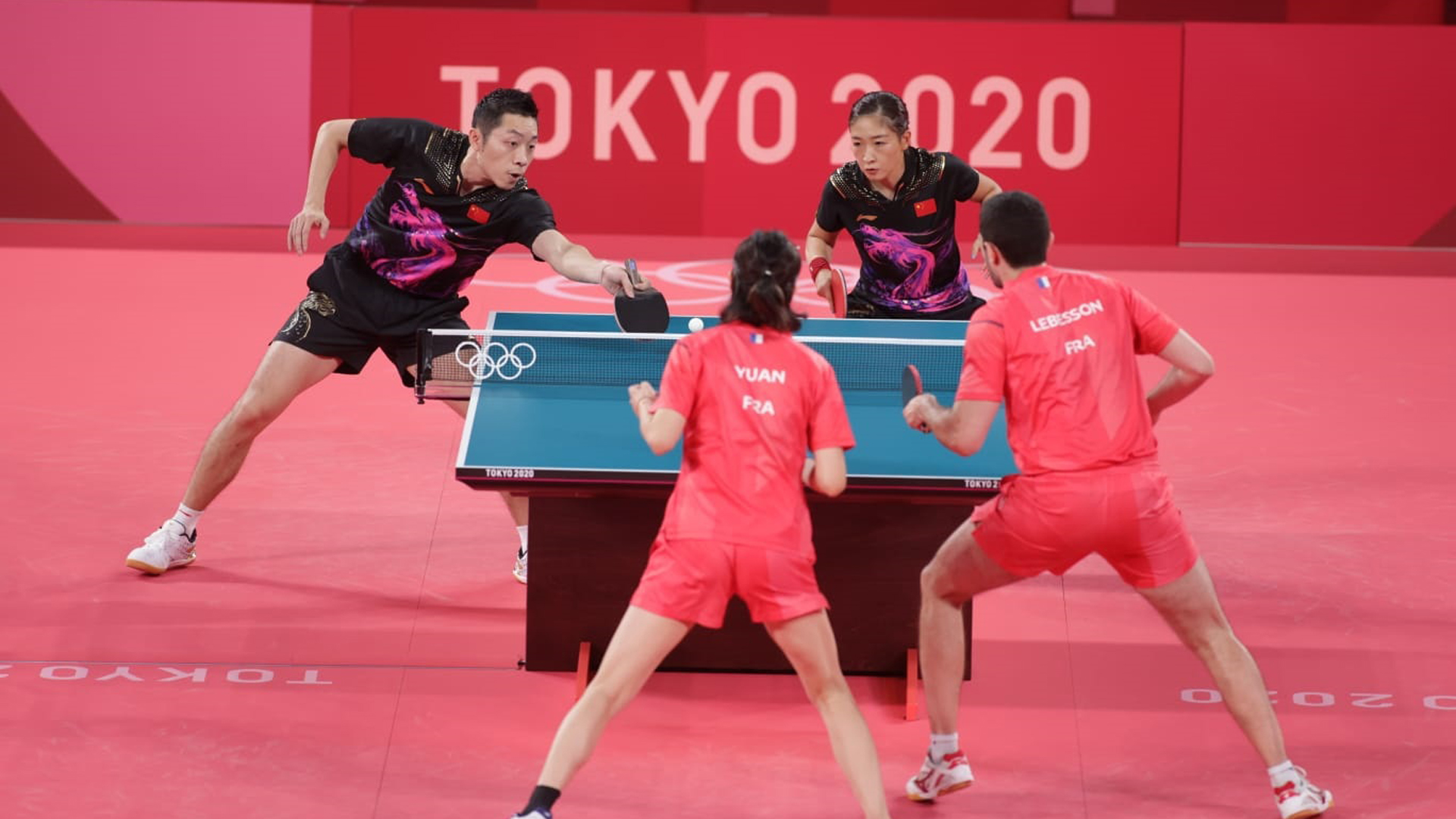 Another magnificent show from Xu and Liu

Opening the day with a straight games victory, Xu Xin and Liu Shiwen have produced another 4-0 success following a semi-finals masterclass from the Chinese combination. Backed up against the ropes in games one and two, French opponents Emmanuel Lebesson and Yuan Jia Nan held three crucial game point opportunities in the third game but failed to convert as top seeds Xu and Liu secured their spot in the Mixed Doubles final (11-5, 11-6, 13-11, 11-7). 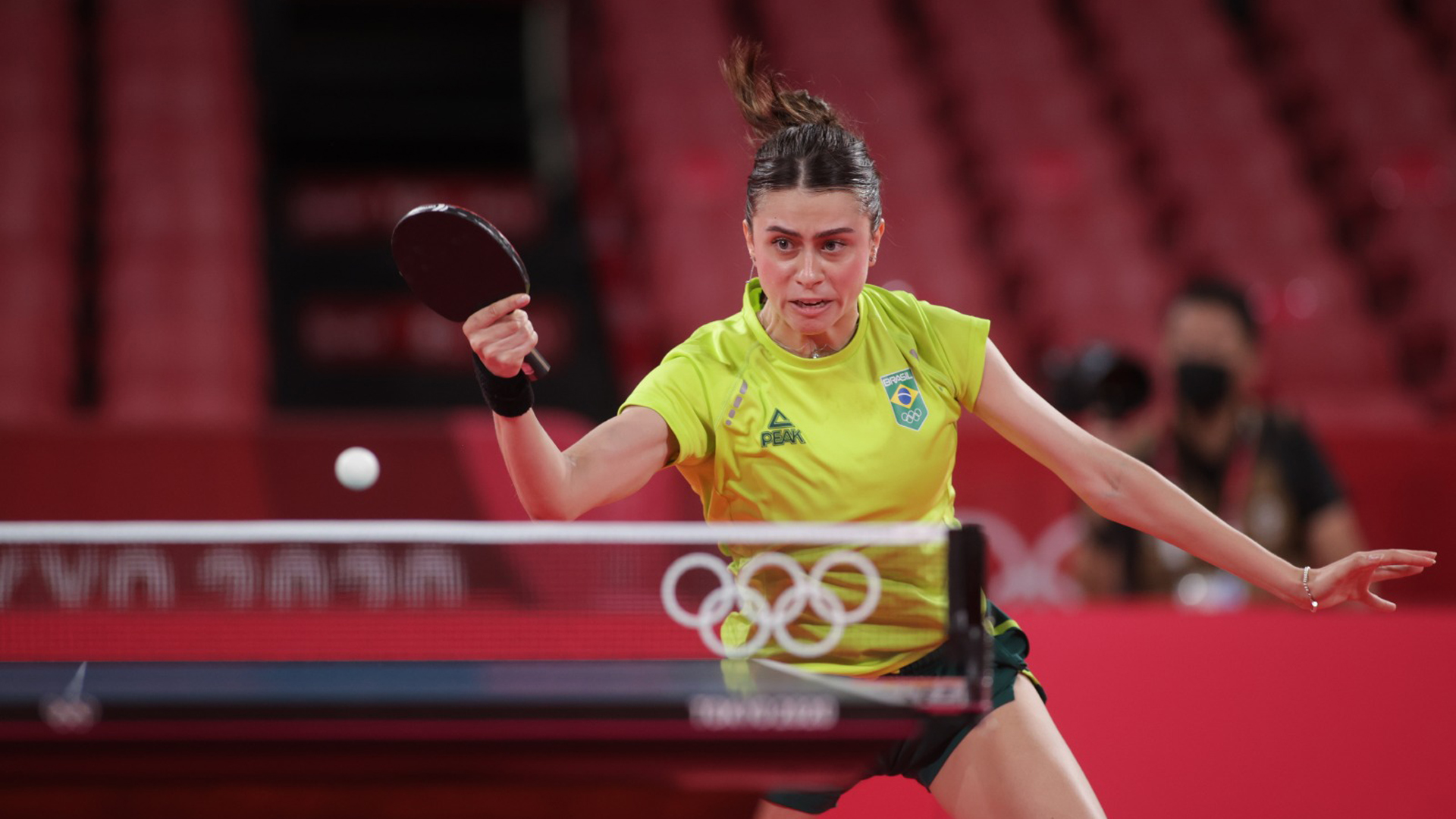 Brazil’s Bruna Takahashi has missed out on the third round of the Women’s Singles draw following a heavy defeat on day two. Number 23 seed Takahashi fell victim to Yuan Jia Nan, seeded 46th, losing out to the French competitor with less than 30 minutes on the match clock (11-8, 11-7, 11-6, 11-8). 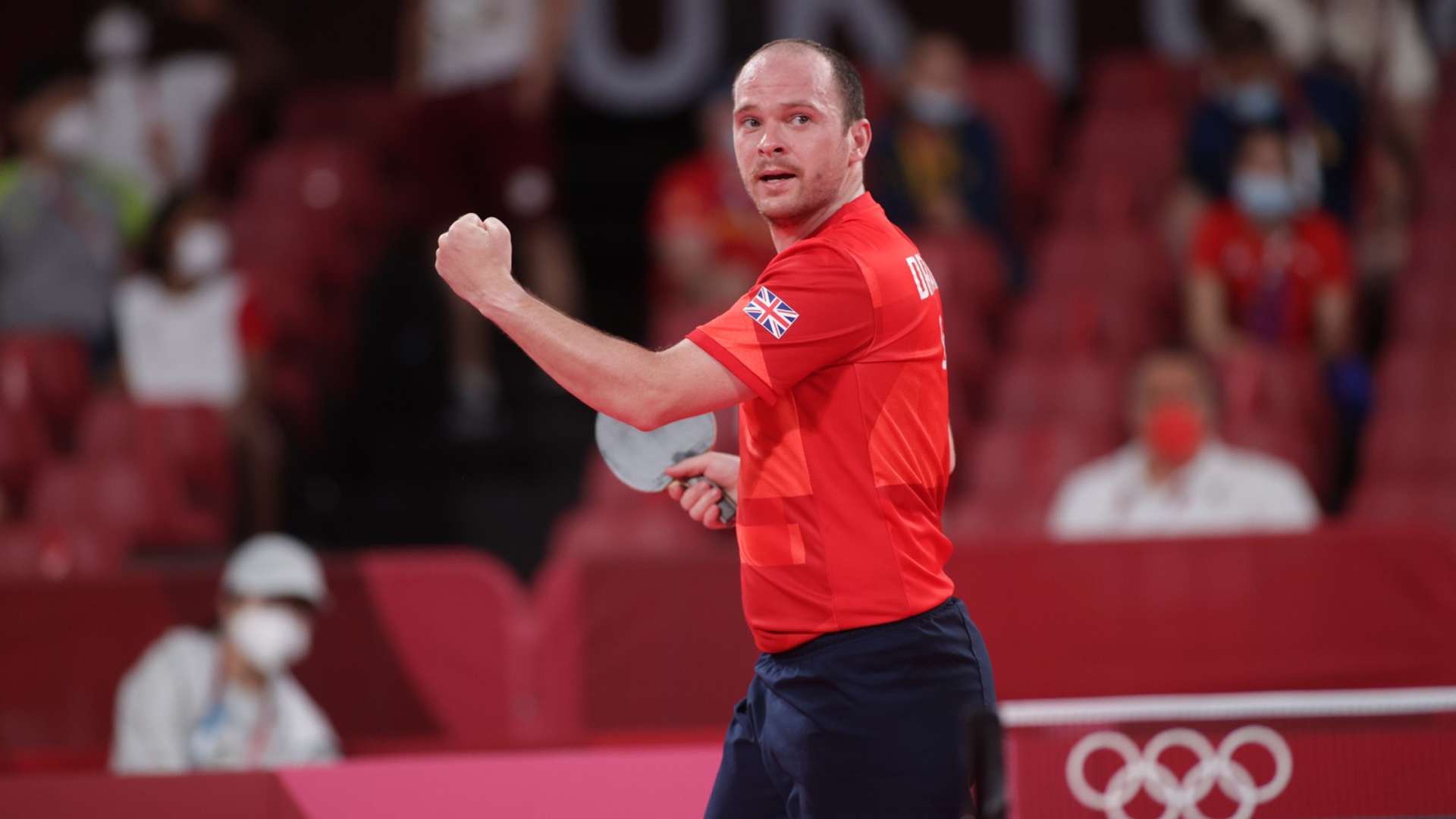 Paul Drinkhall has successfully extended his stay in Tokyo following another fine display from the Brit. The 31-year-old, seeded 36th for the Men’s Singles event, came through a gruelling second-round encounter with Austria’s Robert Gardos, taking down the number 17 seed in five games (13-11, 6-11, 11-4, 12-10, 11-6). The result means Great Britain will have two representatives in round three with Liam Pitchford also joining the action on day three.

“He’s a great player and I’ve always struggled with him in the past… I’m very happy to come through a game like that against a player like him. It was 4-1 but it wasn’t straightforward. I felt in control for a lot of the match, in the first game he had a big lead but I kept fighting and managed to win that. It was certainly a very tough match,” said Drinkhall 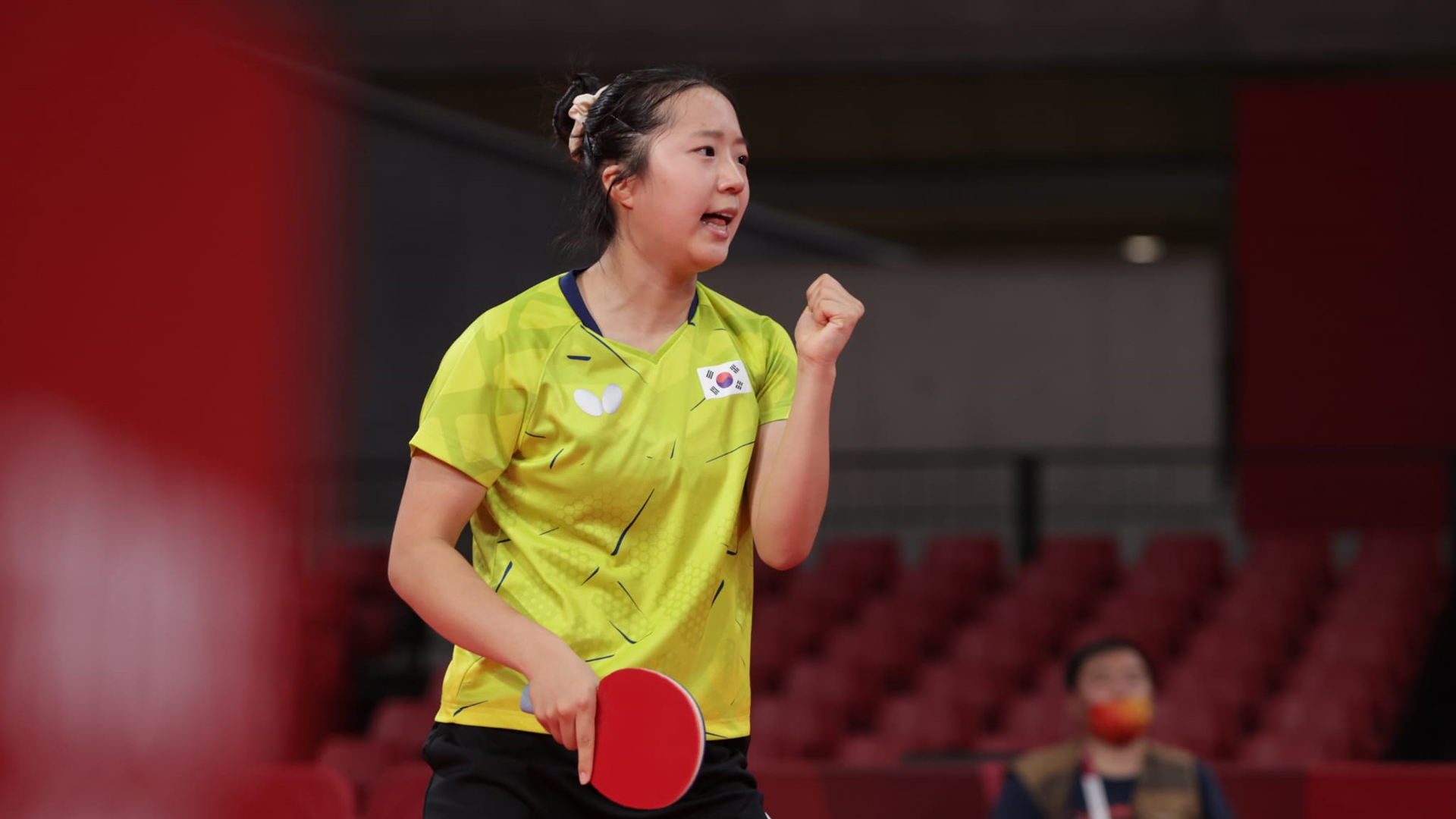 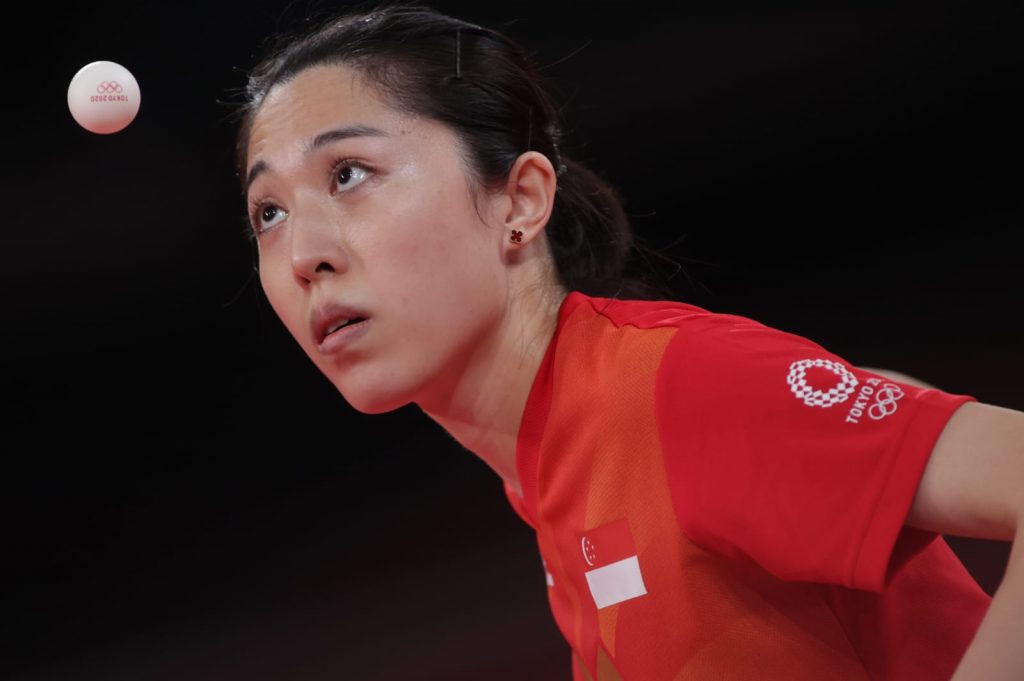 Singapore’s Yu Mengyu got her Olympics campaign off to a flying start by defeating Portugal’s Shao Jieni in straight games to march into the third round of the Women’s Singles competition. Yu, who reached the quarter-final in the 2016 Rio De Janeiro Games, dominated the first two games by winning 11-3 and 11-2 in 10 minutes. It was a tighter affair in the next two games, but the 31-year-old Singaporean eventually got the better of her Portuguese rival by winning 11-8, 11-9 to face Chinese Taipei’s and fourth seed, Cheng I-Ching, in the next round.

Japan avoids a near-defeat by Germany in a titanic battle

Japan’s Mima Ito and Mizutani Jun saved seven match points in an absorbing Mixed Doubles quarter-final clash with Germany’s Patrick Franziska and Petrissa Solja to finally prevail 4-3 in a seven-game thriller. The second-seeded Japanese showed their ability to raise their game for the big occasion as they surmounted a late comeback in the deciding game. They eventually broke the hearts of the seventh-seed Germans 16-14 to win 4-3 (11-8, 5-11, 3-11, 11-3, 9-11, 11-8, 16-14), setting up a semi-final date with Lin Yun-Ju and Cheng I-Ching of Chinese Taipei later this evening. 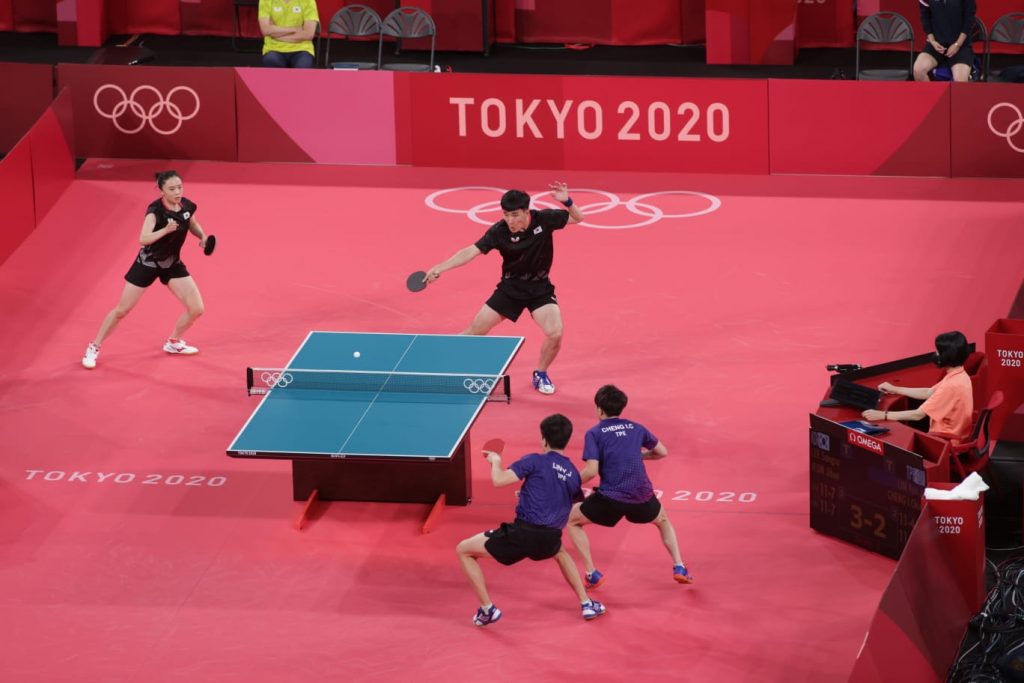 Third seeds Lin Yun-Ju and Cheng I-Ching of Chinese Taipei overcame Lee Sangsu and Jeon Jihee from the Republic of Korea 4-2 (7-11, 11-4, 7-11, 11-7, 11-8, 11-7) to clinch their place in the semi-final of the Mixed Doubles event. Despite losing the first game, Lin and Cheng levelled the score by taking the second game before the Koreans regained their advantage, 2-1 with their win in the third game. However, Lin and Cheng turned the tide quickly against the sixth-seed Koreans by securing the next three games for a potential medal finish. 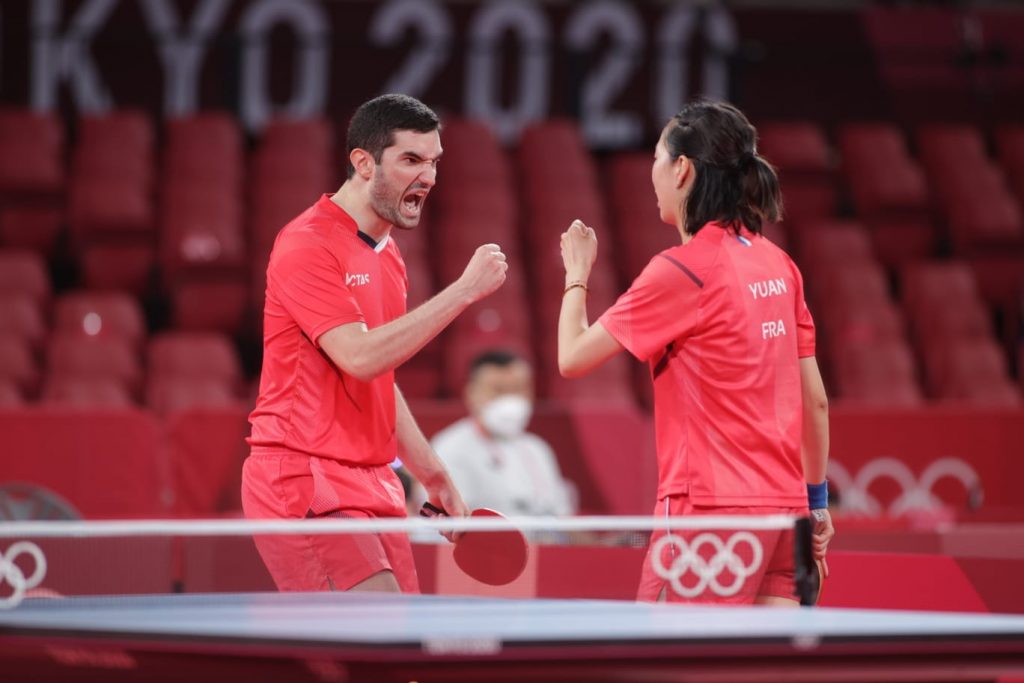 France pushed to the distance by Hong Kong, China

France’s Emmanuel Lebesson and Yuan Jia Nan battled tooth and nail and eventually prevailed in a hard-fought 4-3 (11-3, 6-11, 7-11, 11-8, 9-11, 11-7, 13-11) victory over Wong Chun Ting and Doo Hoi Kem from Hong Kong, China. The seven-game thriller lasted over an hour with both sides delicately poised to advance to the semi-final as the advantage swung either way through the first six games. The eighth-seeded French pair eventually broke the resistance of Wong and Doo, who are seeded fourth, in the deciding game 13-11 to progress where they will now meet the Chinese later this evening.

“It was an amazing game, and we got some lucky breaks. But we also fought hard for each point. It’s nice to have him (Jean-Philippe Gatien, Sports Director of Paris 2024) in the stands and watching us today. It shows that table tennis is important, and we’ll now try to win at least a medal in the sport,” said Lebesson. 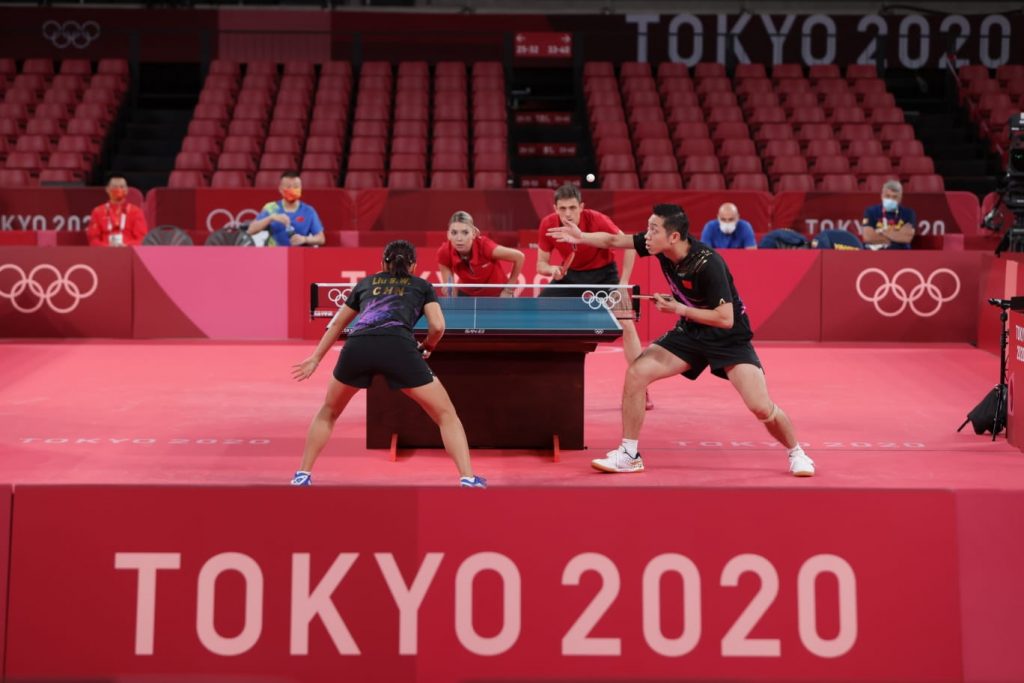 The Romanian duo of Ovidiu Ionescu and Bernadette Szocs was unable to break down the stiff resistance of Xu Xin and Liu Shiwen from China as they fell to a 4-0 defeat in their 30-minute Mixed Doubles quarter-final encounter. The top-seeded Chinese took the early initiative, winning the first game 11-6 in just six minutes. The second game ended even earlier as Xu and Liu enjoyed an 11-1 victory in five minutes. The Chinese pair won the third game comfortably 11-6 before sealing their passage into the semi-final with a 12-10 victory over the ninth seed Romanians in the fourth and final game.

“We take each match as they come but our form is getting better each day too. We were feeling quite nervous before the match but calmed down once we won our first game against the Romanians,” said Xu.

“We hope to get better and better in each game as we play. We’ll analysis our play through the video replays later to map out our strategy for the semi-final,” said Liu.