Staging a major international tournament is always an exacting task; add to the fact that you have to provide a level of organisation that caters for players with impairments, wheelchair access being mandatory, then add all the paraphernalia of creating an environment that has the utmost hygienic standards to cope with the current pandemic, the word “exacting” is an understatement.

Also, add to the equation that you had to postpone the tournament, due to be staged in May 2020, to April 2021, and subsequently, to postpone it once again, in this case to June 2021, owing to government lockdown regulations, a most demotivating situation. Not for Slovenia, quite the reverse, a major challenge!

The Slovenian National Paralympic Committee (NPC) and the Slovenian Table Tennis Association (STTA) met all the demands and emerged with flying colours; the Paralympic World Qualification Tournament staged in Lasko, a spa town located in the east of the country, from Thursday 3rd to Saturday 5th June, proved an unmitigated success.

Representing the ITTF Executive Committee at the event was Petra Sörling, Executive Vice-President in charge of Para Table Tennis:

I want to thank the Slovenian NPC and the STTA for going ahead with the organization of the event in such unprecedented circumstances. Not only it ended “Covid-free” but more importantly, provided an exceptional opportunity for the Para Table Tennis family to gather again, fifteen months after.

Indeed, since 2004, Slovenia has regularly hosted a Para Table Tennis event on the ITTF calendar, only halted in 2020 due to the pandemic. On this occasion, the traditional International Open was replaced by the first-ever occasion when such a final qualifying tournament for a Paralympic Games had been held; quite simply there could not have been a better venue selection.

I did get goosebumps when I saw a full hall of athletes playing matches for the first time again after one and a half years; all players had a smile on their faces!

For the organizing committee, it was a quite daunting task, not only a tournament of high importance, also one that involved 423 participants from 47 different National Paralympic Committees, including over 200 players competing in 21 events.

Attention to detail, as never before, 1,110 Covid-19 tests were organised, all emerged negative; nurses and medical staff were present in the hotel 24 hours a day.

Additionally, a total of 10 tables was streamed live on YouTube, and to facilitate also the participants to follow matches, the official hotel was also displaying all ten tables in the respective 10 channels on their CCTV. A first time also in Slovenia.

The efforts made, produced quite stunning numbers on YouTube. The tournament registered a total of 153,586 views, with over 13,000 hours of watch time! 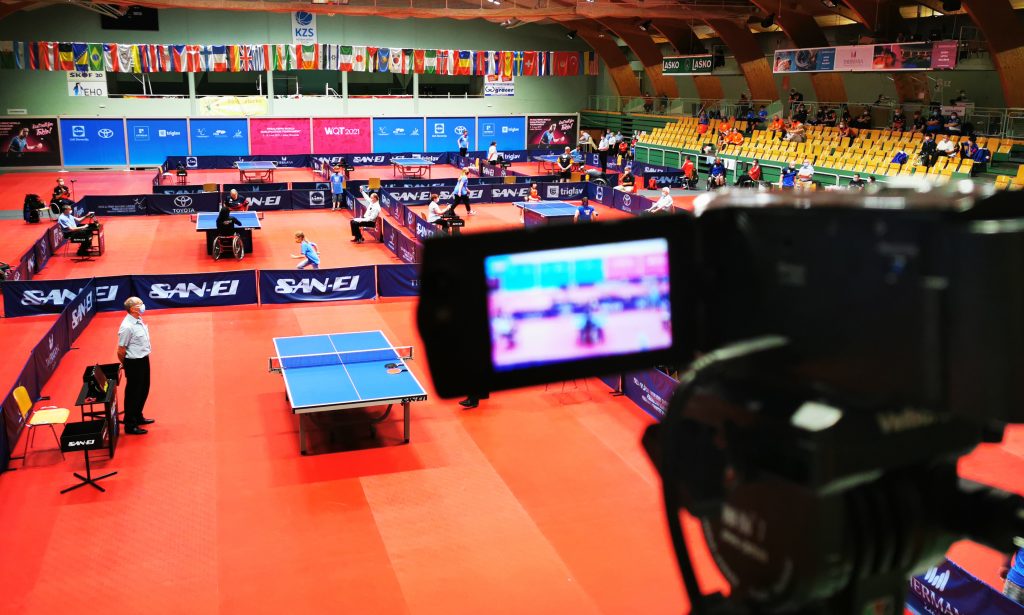 Streaming of all 10 tables resulted in over 150,000 views at the World Qualification Tournament

Last but not least, the event was played on San-Ei tables and with DHS balls, trying to mimic the Tokyo 2020 Paralympic Games conditions as much as possible.

Quite simply an outstanding achievement; a tremendous success thanks to a group of dedicated personnel, many volunteers, all contributing to an event to be remembered, one that maintained the traditions of Slovenia, traditions of excellence.

We counted with the invaluable supervision of Slovakia’s Tomas Varga as the Technical Delegate making a perfect tandem with Greece’s Tina Crotta as Referee. They didn`t miss the opportunity to make history in the first Para qualification event held in a venue that they can manage blindfolded. They had a team of three deputy referees and 28 national and foreign umpires, including twelve Blue Badge, who provided the level of officiating that the players will find in Tokyo.