This week marks what should have been 2020 ITTF World Tour Korea Open with the event originally scheduled to take place in Busan from Tuesday 16th to Sunday 21st June.

Following the highly successful #ITTFSmashBack weeks focusing on past editions of the Japan, China and Hong Kong Opens, the classic throwback series returns with standout fixtures from the Korea Open.

Each and every day at 12:00 GMT starting from Monday 15th June, treat yourself to a whole host of classic matches from years past on the ITTF YouTube channel and Facebook page. Seven incredible contests – you won’t want to miss a single one!

Kick your week off in style with a look back at an epic men’s singles gold medal showdown in 2009 between two Asian giants. Two-time World Championships quarter-finalist from China, Hao Shuai meets young Japanese star Jun Mizutani in a thrilling affair.

Enjoying one of the best performances on his career, Tristan Flore has captured the hearts of the local fans with his impressive run to the last eight. Now the Frenchman faces his biggest challenge yet in World champion Ma Long – can Flore achieve the biggest of upsets and topple the Chinese icon?

Sitting on the cusp of history, Korea Republic’s Jang Woojin and DPR Korea’s Cha Hyo Sim are just one win away from pandemonium, but first they must negotiate the Chinese teenage dream team of Wang Chuqin and Sun Yingsha who stand in their way. Backed by the passionate home crowd, destiny awaits.

Earning a stunning 4-0 victory over 2018 men’s singles champion Jang Woojin in the previous round, the host nation’s very own Jeoung Youngsik has his eyes on the prize. Men’s World Cup champion Fan Zhendong is the next man to face the in form Korean – make sure you catch this breathtaking contest!

Claiming her first-ever ITTF World Tour women’s singles title on Korean soil in 2011, Feng Tianwei is looking to replicate the feat six years on. However, the task isn’t a simple one for the Singapore stalwart with Japanese second seed Kasumi Ishikawa providing the opposition at the final hurdle.

Watch two of Germany’s finest go head-to-head for men’s singles glory as Timo Boll and Patrick Franziska do battle. Former World no.1 Boll chases a first World Tour singles success since 2010 but will qualification hero Franziska spoil the party in his first final?

A legendary rivalry featuring two of the sport’s all-time greats, the master of penhold Xu Xin takes on ‘The Dragon’ Ma Long in a match for the ages. Never a dull moment in a contest between the two, this promises to deliver pulsating action from start to finish – who will emerge victorious in this ‘Clash of Titans’? 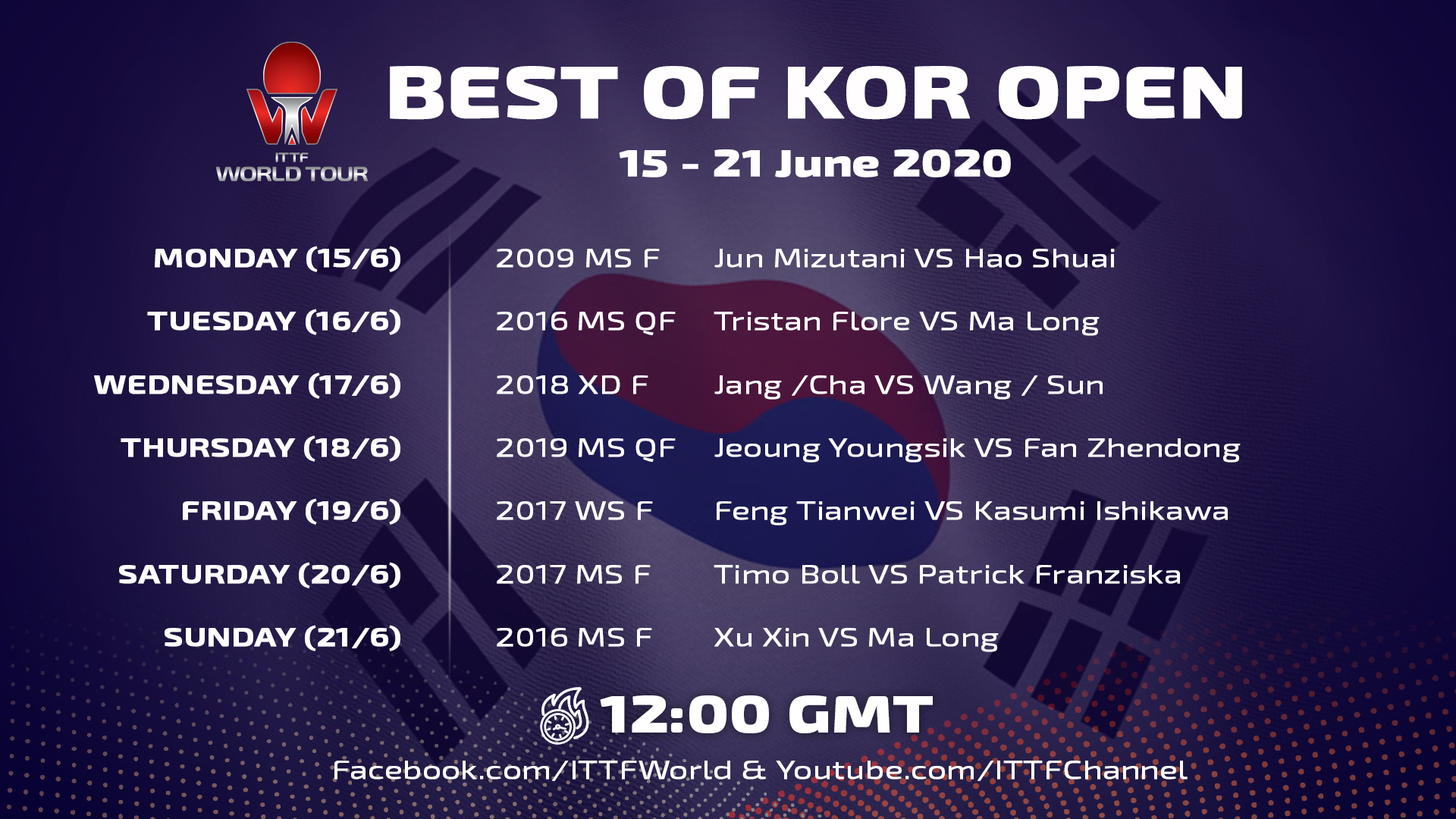 If all of that wasn’t enough, ITTF will also be covering Korea Open week on ITTF.com with content based around the prestigious event’s historical moments to further compliment your experience.

Don’t forget you can watch a whole series of classic matches completely free at itTV! There are no geographical restrictions; there is access to all matches since 2010, it’s your one stop for everything that’s table tennis!

Also there’s extra exclusive content available like Pongcasts, DHS Top 10 points, Inside My Mind series and more. Enjoy your fill of table tennis action and reaction while you stay at home to save lives!