Join us from 11.00 am local time in Muscat as qualification continues for the 2020 ITTF Challenge Plus Oman Open on Thursday 12th March.

That’s it for the day’s action. Be sure to join us again on Friday from 10.00am local time for more exciting contests here in Muscat!

Mixed Doubles: Round of 16

Losing two seeded combinations in the previous session, the final session of the day saw a third added to the list of exits as Slovakian seventh seeds Wang Yang and Tatiana Kukulkova suffered defeat at the hands of Belgium’s Florent Lambiet and Nathalie Marchetti (13-11, 4-11, 11-9, 11-6).

Mixed Doubles: Round of 16

Seeded third in Muscat, Romania’s Ovidiu Ionescu and Bernadette Szocs are through to the quarter-finals of the mixed doubles event following a ruthless performance against Indian opponents Manav Vikash Thakkar and Archana Girish Kamath (12-10, 11-7, 11-7).

After the break in play we’re back for two more sessions, both of which play host to Round of 16 action from the mixed doubles tournament.

Here’s a look at the mixed doubles draw – who is your favourite for gold? 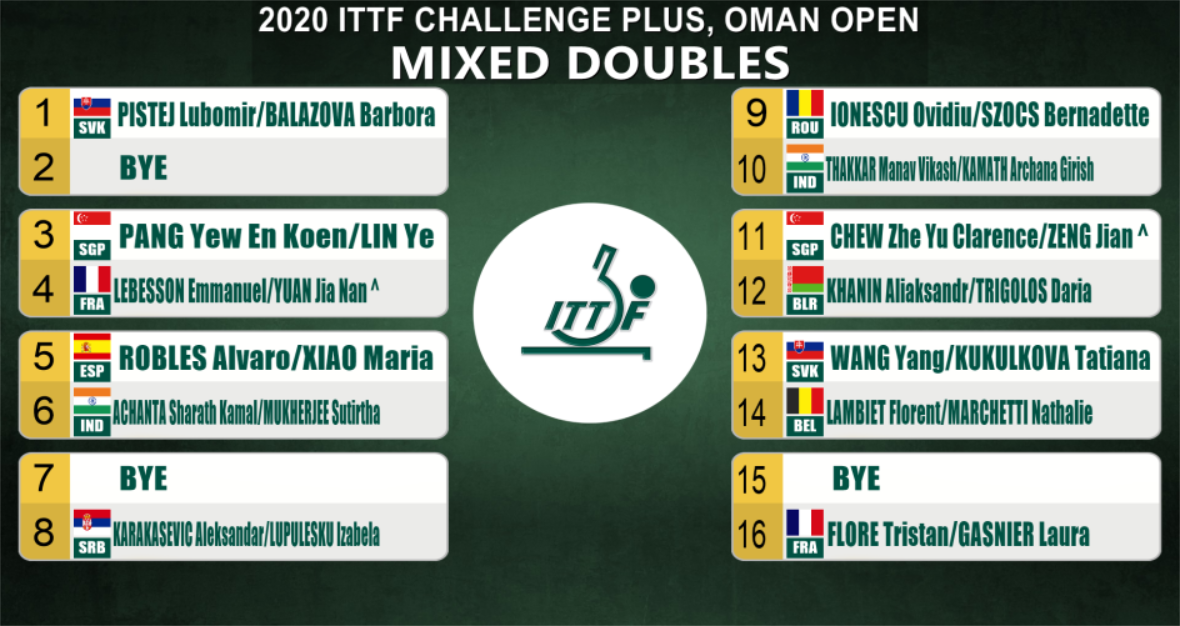 Jeet Chandra found himself needing to see off the mammoth challenge of Nigeria’s Abdulrahman Abdullahi in a fiercely fought five-game thriller. Winning the match 3-2 (10-12, 12-10, 11-5, 9-11, 11-4) Chandra now needs to push on into the main stage with the same vigour.

“It was a pretty tricky match and he was a tricky player but I won the match. From tomorrow I have to focus to start with higher concentration.” Jeet Chandra

Austria’s Tarek Al-Samhoury had a swifter time on the table, as he beat Oman’s Asad Alraisi, eliminating the host nation athlete in a straight games win (11-5, 11-5, 11-6).

Shetty opens the day with a win

Sanil Shetty enjoyed a strong start to the day here in Muscat, Oman as he beat home favourite Issa Al-Riyami in straight games (11-6, 11-3, 11-4). This secured his top spot in a tough group in which he coasted to three wins and will now be ready to face the seeded entries that enter the competition tomorrow.

“I was preparing for the match and it was like a comfortable win for me. Now I will focus on the main draw. I’m sure that the main draw will be more difficult because I’m going to play against stronger players.” Sanil Shetty

Slovakia’s Tatiana Kukulkova defeated India’s Kaushani Shah in a brilliant display as she won 3-0 (11-8, 11-8, 11-9) to kick start the proceedings on day two.

“My estimation was to push the ball on the table always wishing that she will make mistakes and I played top spin to her backhand and then I needed to push again because she has a special rubber but I think that I did very well. Next will be mixed doubles qualification and I hope to win.” Tatiana Kukulkova

Ready for the action?