A scintillating contest to end the penultimate day of action, Saturday 7th March, at the 2020 ITTF World Tour Platinum Qatar Open in Doha; the verdict went in favour of Japan’s Jun Mizutani and Mima Ito. 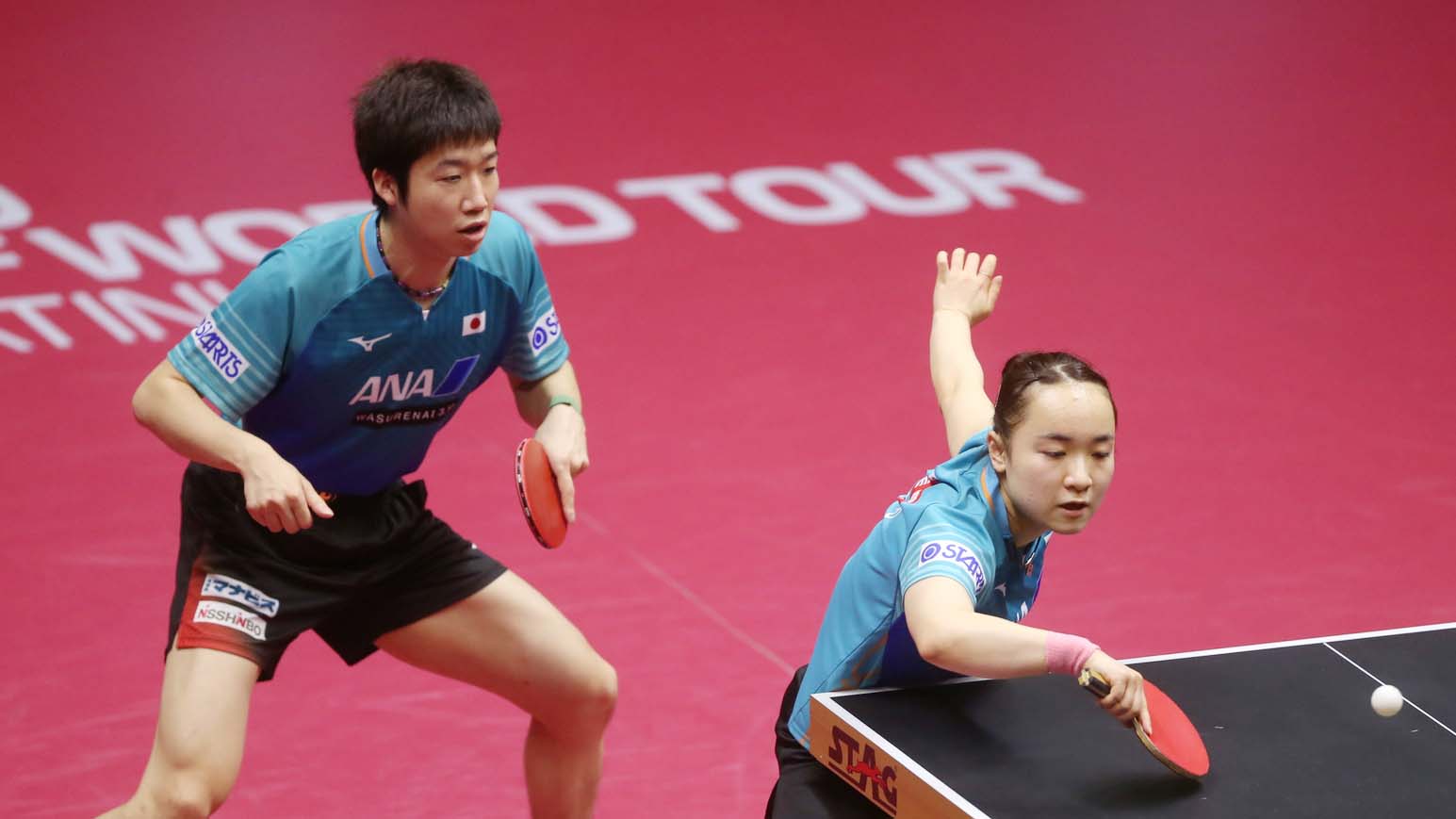 Success as status advised but make no mistake, Wang Chuqin and Sun Yingsha, winners of the mixed team event at the Buenos Aires 2018 Youth Olympic Games, provided most formidable opposition. In fact if a survey had been taken before the match, as to which partnership was the favourite, I suspect opinions would have been totally divided.

Required to qualify, Wang Chuqin and Sun Yingsha had clearly underlined their credentials; in the opening round they had beaten Hong Kong’s Wong Chun Ting and Doo Hoi Kem, the no.2 seeds (11-9, 14-12, 11-7), prior to ousting Hungary’s Adam Szudi and Szandra Pergel (11-5, 11-5, 11-5) to book their place in the penultimate round where the good form continued.

They accounted for Spain’s Alvaro Robles and Maria Xiao (11-6, 11-4, 11-5); they had reached the final without surrendering a single game.

Furthermore, in the final they had a formidable advisor sitting courtside, Ma Lin, including Grand Finals, a career total of 42 ITTF World Tour men’s doubles titles.

Moreover, he had also proved himself in the art of mixed doubles; in 1999 in Eindhoven he was crowned world champion partnering Zhang Yingying, four years later he succeeded in Paris in harness with Wang Nan.

Similarly, Jun Mizutani and Mima Ito had progressed to the final without surrendering a single game.

Different in style, Jun Mizutani with his top spin technique, preferring to play a step back from the table; Mima Ito very different, she excels close to the table with her fast attacking style. The play on different horizontal lines

The evidence was clear, whatever seeding may have suggested, the best pairs had reached the final.

In the final with Jun Mizutani playing towards Sun Yingsha, the Japanese duo made the better start; they won the first five points. The Chinese pair responded, they reduced the margin to one point at 9-8; the next two points went to Jun Mizutani and Mima Ito, a crucial opening game had been won.

Order changing, Wang Chuqin playing towards Mima Ito, the Chinese pair won the second game to level matters, before in the third game, with Jun Mizutani directing his attacking strokes in the direction of Sun Yingsha, the Japanese duo established a 2-1 lead in games.

Now, in the fourth the task for Jun Mizutani was to prevent Wang Chuqin playing strongly towards Mima Ito who, to be fair proved more than a match for her more powerful male adversary.

One wonders what riches may await on home soil later in the year, can they repeat the success enjoyed in Doha, is gold at the Tokyo 2020 Olympic Games more than a possibility?