Will Ma Long “The Dragon” defend his Qatar Open crown?

Watch the drama unfold in Doha as the main draw of the 2020 ITTF World Tour Platinum Qatar Open gets under way!

“Dragon” destined to do it again in Doha?

2013, 2016, 2017, 2019. 2020? Ma Long is already the most successful men’s singles player in ITTF World Tour Platinum Qatar Open history after “The Dragon” roared back last year from a long-term injury to win a record fourth title in Doha.

Will the reigning Olympic and World champion now make it five Qatar Open crowns? The no.3 seed starts his campaign on Thursday 5th March against Japan’s Masataka Morizono. One expects that the 31 year old would need to see off top Chinese opposition in order to take the title.

Ma is in the same half of the draw as top seed Fan Zhendong and in the same quarter as Liang Jingkun, the no.8 seed. Meanwhile, Xu Xin is the main threat on the other side of the draw. The no.2 seed defeated “The Dragon” in the final of the ITTF World Tour Platinum German Open one month ago.

Alongside Ma Long, Fan Zhendong and Xu Xin start the main draw in Doha as favourites. Fan, who concluded last year in style by succeeding at the Agricultural Bank of China 2019 ITTF World Tour Grand Finals but experienced a quarter-final defeat earlier this year at the German Open, faces Sweden’s former European Youth champion, Anton Källberg. Meanwhile, a potential quarter-final could materialise against fellow Swede, Mattias Falck, the no.7 seed and runner up at the Liebherr 2019 ITTF World Championships.

Xu kicks off against surprise qualifier, Croatia’s Frane Kojic, and the German Open champion is in the same quarter as Brazil’s Hugo Calderano, the no.6 seed, who could well face a second round meeting with Ochsenhausen club colleague, Frenchman Simon Gauzy, the no.14 seed.

Will “Dark Knight” see the light?

Another top name from China, Lin Gaoyuan, the no.4 seed, was the player Ma Long beat in last year’s Qatar Open final and “The Dark Knight” has a point to prove after he was not included in the line-up for the now postponed Hana Bank 2020 World Team Championships in Busan, Korea Republic.

Lin begins against the vastly experienced 43 year old Vladimir Samsonov of Belarus, a two-time Qatar Open champion among his 27 ITTF World Tour men’s singles titles (just one fewer than record-holder Ma Long). After a disappointing start to the year, “Vladi” has found his form in Doha, defeating China’s Zhou Yu in the final qualification round.

After Hungary, Harimoto hungry for more

Equally, in the same quarter of the draw, there is a testing opening round encounter for Japan’s 16 year old Tomokazu Harimoto, the no.5 seed and winner at the recent ITTF World Tour Hungarian Open. Chinese Taipei’s 38 year old Chuang Chih-Yuan served out a shock defeat against Harimoto in the opening round of this year’s German Open. Will the teenager get his revenge?

Patrick Franziska, the no. 10 seed, is Germany’s sole representative in Doha, following the withdrawals of Timo Boll and Dimitrij Ovtcharov. Having suffered a first round exit at both German and Hungarian Opens, Franziska takes on China’s Xu Chenhao, runner up at the 2013 ITTF World Tour Japan Open. 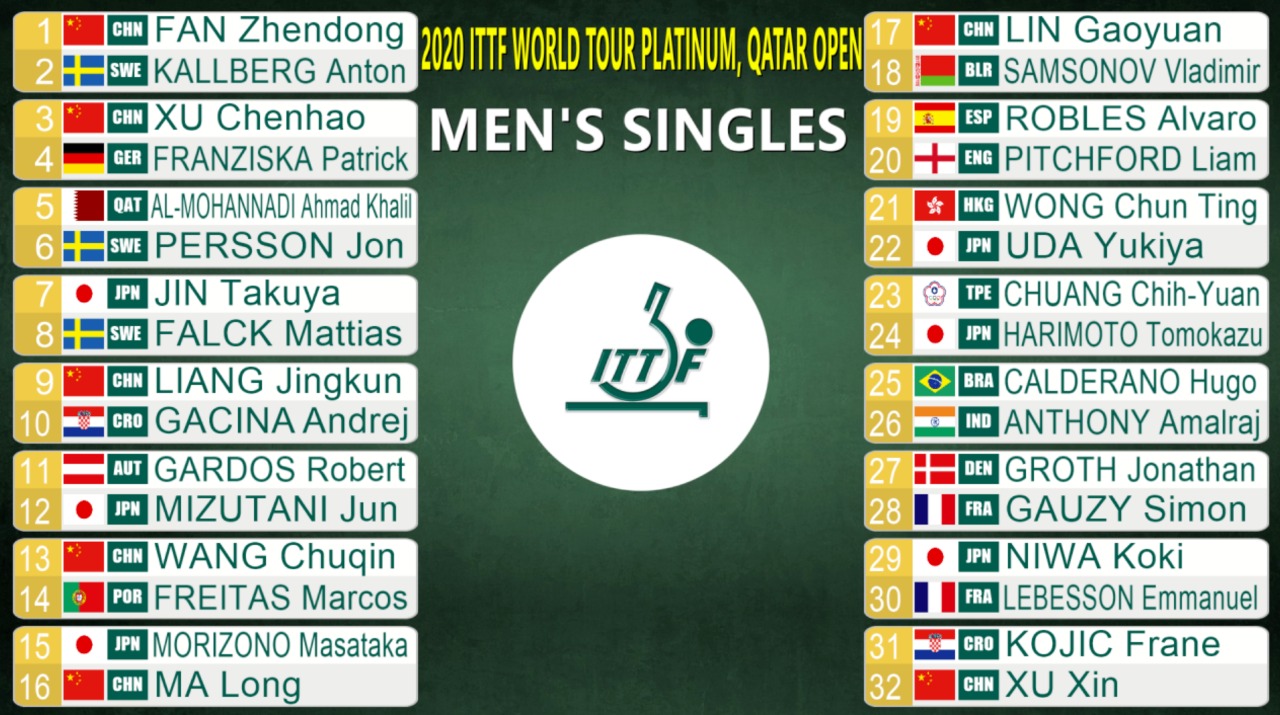 In the women’s singles, reigning champion and no.4 seed Wang Manyu of China begins her title defence against compatriot Sun Mingyang, while another Chinese opponent could await in the second round: Qian Tianyi, the 2018 World junior champion, takes on Hong Kong China’s Doo Hoi Kem, the no.13 seed; the contest is in the balance.

There is no shortage of top Chinese players vying to wrest the title from Wang Manyu: Chen Meng is the top seed, Sun Yingsha the no.2 seed, Zhu Yuling the no.5 seed and reigning Olympic champion, Ding Ning, the no.6 seed.

Notably Sun Yingsha, who faces Japan’s Miyuu Kihara in the opening round, is in the same quarter of the draw as Ding Ning, who starts her quest against Monaco’s Yang Xiaoxin. Zhu Yuling, in the same quarter as Wang Manyu, opposes Singapore’s Zeng Jian in round one. Arguably the favourite for gold, Chen Meng has Japan on her mind. The German Open champion kicks off her campaign against Honoka Hashimoto, while a quarter-final against Kasumi Ishikawa, the no.8 seed, could be on the cards as well.

No easy ride for Ito and company

The biggest rival to China’s women, as ever, is Japan’s Mima Ito. The no.3 seed finds herself in the same part of the draw as Singapore’s Feng Tianwei, the no.7 seed, and she also faces a tough opening round match against China’s Gu Yuting, the Singapore 2010 Youth Olympic Games gold medallist, who emerged victorious in her most recent meeting with Ito in the first round of last year’s ITTF World Tour Japan Open. 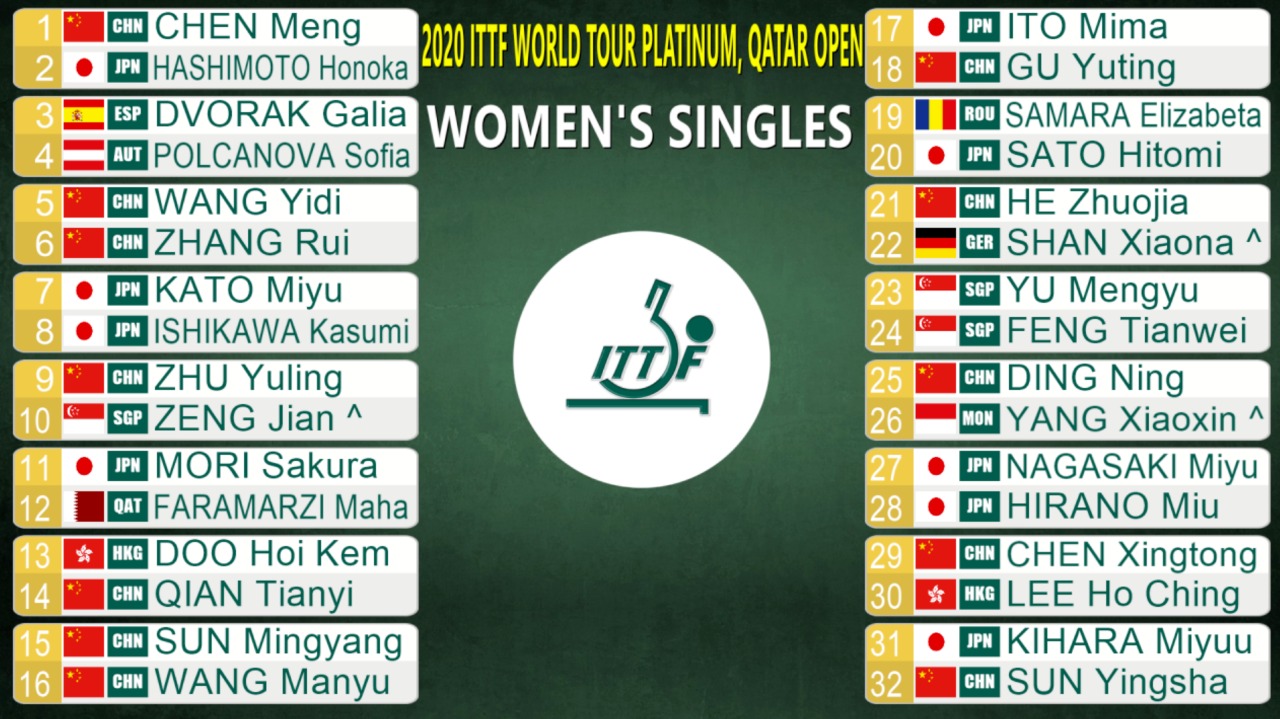 Japan’s Miyuu Kihara (15) and Miyu Nagasaki (17) are top seeds in the women’s doubles competition. The Agricultural Bank of China 2019 ITTF World Tour Grand Finals champions could well face China’s Chen Meng and Ding Ning at the semi-final stage. On the other half of the draw are Wang Manyu and Zhu Yuling, the no.2 seeds, and recently crowned Hungarian Open champions, Miu Hirano and Kasumi Ishikawa.

In the men’s doubles, Ma Long and Xu Xin start off against Sweden’s Anton Källberg and Jon Persson. The Chinese top seeds could face a potential semi-final against compatriots Fan Zhendong and Wang Chuqin, while Hong Kong China’s Ho Kwan Kit and Wong Chun Ting, the no.2 seeds, are favourites to progress from the other half of the draw.

In the mixed doubles, Japan’s Jun Mizutani and Mima Ito, the top seeds, could be set to face Germany’s Patrick Franziska and Petrissa Solja, bronze medallists at the Liebherr 2019 World Championships, already in the second round. Hong Kong China’s Wong Chun Ting and Doo Hoi Kem are the no.2 seeds.

China’s players will not be earning a single dollar in Doha after they agreed to donate all of their Qatar Open prize money in aid of Wuhan in the fight against COVID-19. Ma Long, Athlete Committee Head of the Chinese Table Tennis Association (CTTA), called for a discussion with all Chinese athletes participating at the Qatar Open, leading to the decision. Liu Shiwen, who is absent from the action through injury, added that she will donate the equivalent amount of the singles winner prize money.