The first ITTF World Tour event of the new decade is upon us! The 2020 German Open is entering the main draw stage (from Thursday 30th January to Sunday 2nd February) after two days of intense qualification rounds.

As ever, with five event categories and five titles up for grabs, who will enjoy the strongest possible start to the year?

Clash of the Titans

Top seed in the men’s singles race, Xu Xin (CHN) is looking to take home his first career German Open singles title. A runner-up in 2018 and 2019, Xu will kick off his campaign against 2019 World Championships bronze medallist An Jaehyun (KOR) with Patrick Franziska (GER) potentially awaiting in round two. Franziska famously took Xu the full distance in one of the most memorable matches of 2019 in the Australian Open semi-final.

The lower section of the draw contains a whole host of superstars including World champion Ma Long (CHN) and Men’s World Cup and World Tour Grand Finals champion Fan Zhendong (CHN), who could cross swords in an epic semi-final clash. 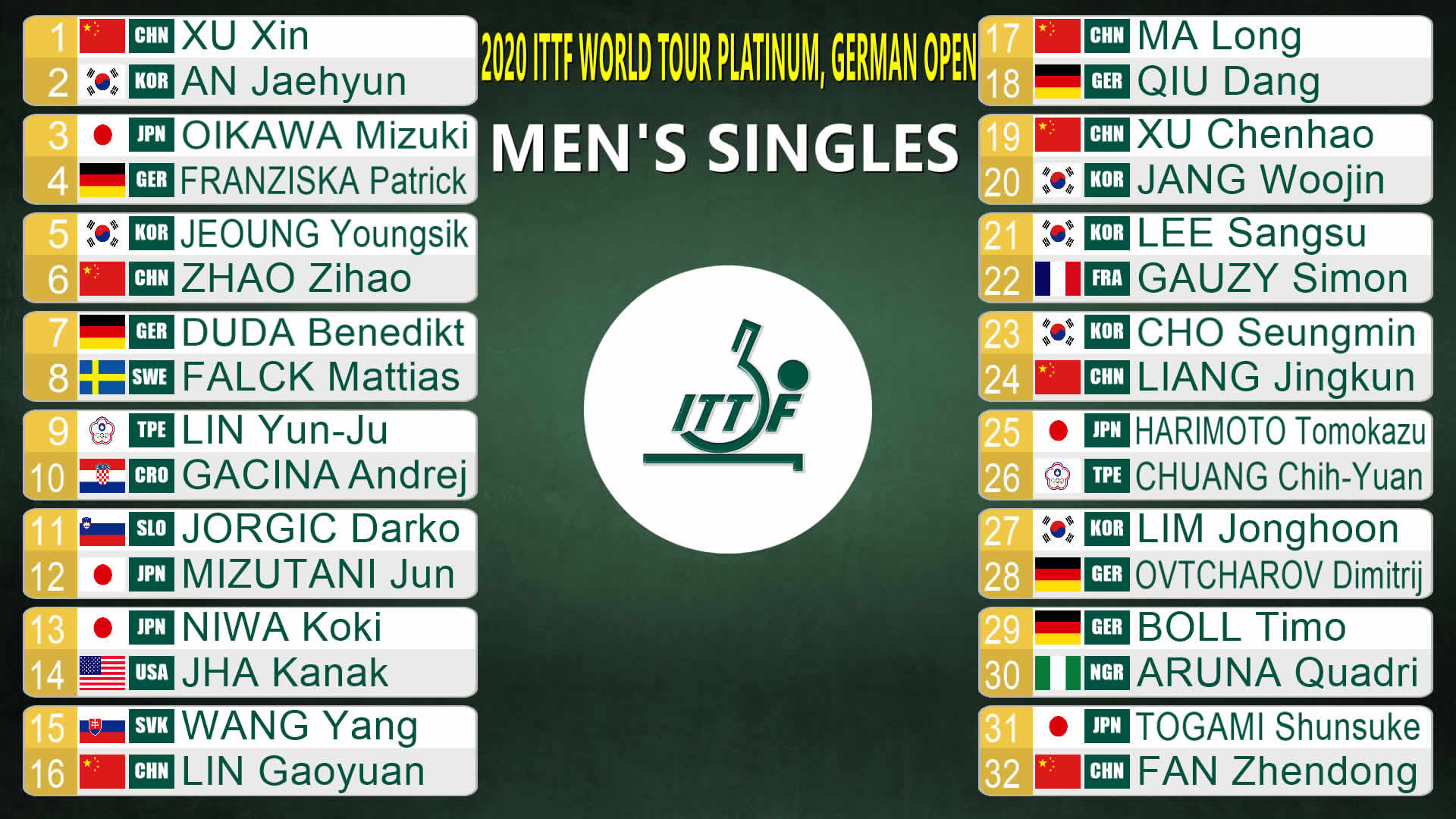 There is also a possibility of an all-German quarter-final thriller between two of the country’s greatest players and former German Open champions, Timo Boll and Dimitrij Ovtcharov. Boll begins his journey against the only African player left in the men’s singles, Quadri Aruna (NGR).

Meanwhile, world no.5 Tomokazu Harimoto (JPN), still only 16 years old, will be looking to continue his rise, just as fellow teenage talent, 18-year-old Lin Yun-Ju (TPE) is seeking to progress from the other side of a draw, which also features 2019 World Championships finalist Mattias Falck (SWE). American qualifier Kanak Jha takes on Koki Niwa (JPN) in round one.

Two players who continue to take the sport by storm, 19-year-old stars Sun Yingsha (CHN) and Mima Ito (JPN) have both collected the German Open women’s singles title before and lined up against one another in last year’s final with Sun emerging victorious. The dynamic duo, the most exciting women’s prospects from China and Japan, could be set to meet again in Magdeburg, this time at the semi-final hurdle.

The German Open happens to be one of the few events that Ding Ning has never stood atop the podium, something the Olympic champion will be looking to change in 2020. Ding could be in line for a second-round meeting against fellow veteran Feng Tianwei (SGP), who takes on recently crowned All-Japan Nationals champion Hina Hayata (JPN).

On her path to glory at the World Tour Grand Finals last December, Chen Meng (CHN) showed great character to see off World and Women’s World Cup champion Liu Shiwen (CHN). Now there could be an opportunity for Liu to try and avenge that outcome with Chen a potential opponent come the last four in Magdeburg.

A finalist in 2015, the host nation’s very own Petrissa Solja (GER) will give it her all to please the fans. Should she overcome Zeng Jian (SGP) in the opening round, the fifth seeded Zhu Yuling (CHN) is the likeliest opponent in wait. 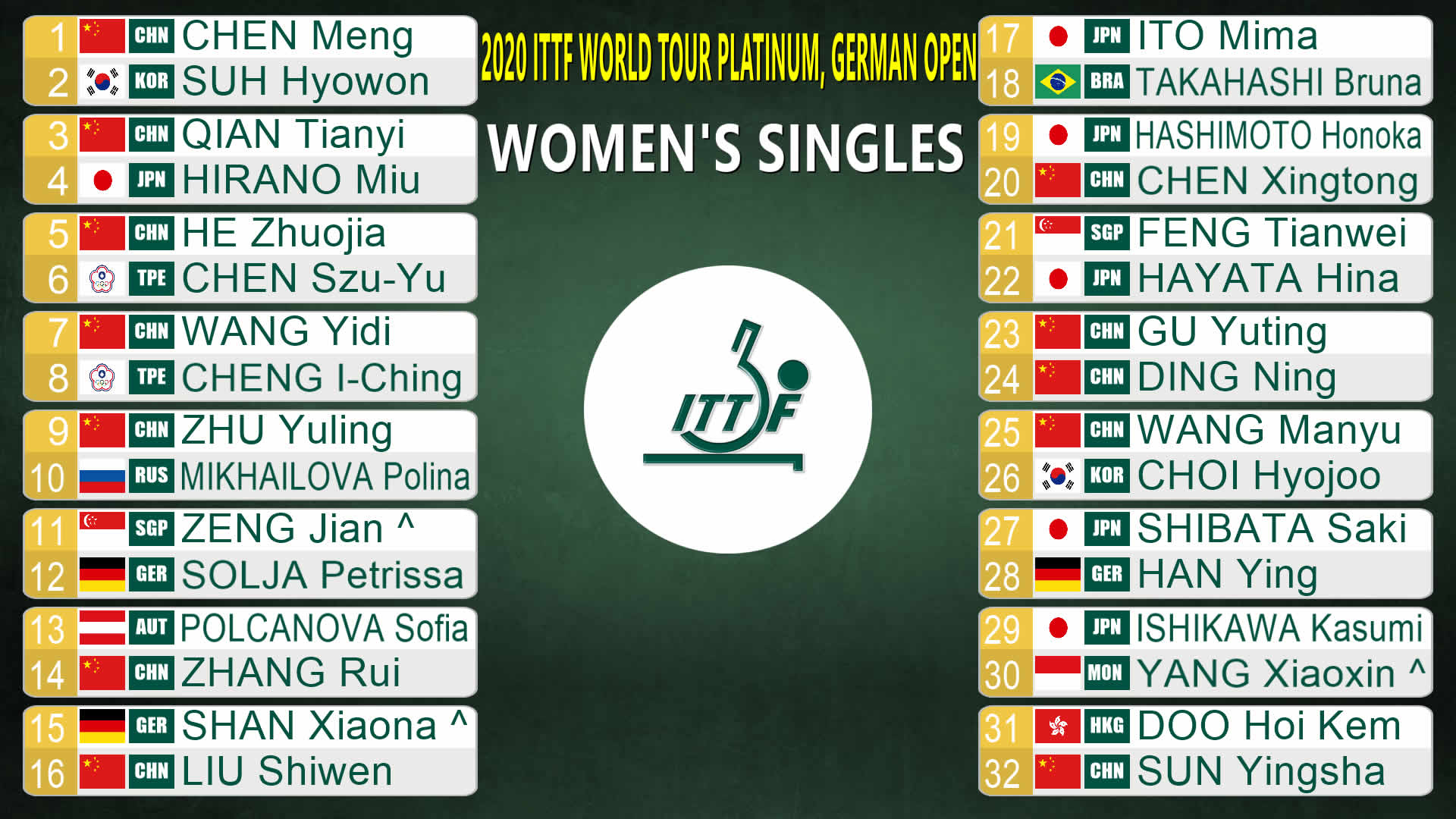 Second seeds Lin Yun-Ju and Cheng I-Ching could well meet the winner of that tie if all goes according to plan for the Chinese Taipei pair, but first they must centre their focus on Serbian qualifiers Aleksandar Karakasevic and Izabela Lupulesku.

Widely regarded as the partnership to beat in the mixed doubles game, top seeds Xu Xin and Liu Shiwen (CHN) are the favourites to lift the trophy in Magdeburg, but one pair that has caused them to stumble in the past, Wong Chun Ting and Doo Hoi Kem (HKG), are potential semi-final opponents.

Tight race across the board

2017 German Open winners Jeoung Youngsik and Lee Sangsu (KOR) have been seeded first for the men’s doubles event and will open their account with a potential banana skin with the home crowd set to lend its support to Germany’s Timo Boll and Ricardo Walther.

Other challengers for the title include 2019 World Championships silver medallists Ovidiu Ionescu (ROU) and Alvaro Robles (ESP), who also face German opposition at the first hurdle in Patrick Franziska and Dimitrij Ovtcharov.

Ding Ning and Sun Yingsha (CHN) will have to be at their best from the word “go” in the women’s doubles category, having drawn Elizabeta Samara and Daniela Monteiro Dodean (ROU) in the opening round. Miu Hirano and Kasumi Ishikawa (JPN) are also positioned in the same, highly competitive half of the draw, while top seeds Chen Meng and Wang Manyu (CHN) have been placed at the summit.