The 2019 ITTF World Veterans Tour kicks off in Shenzhen, China! 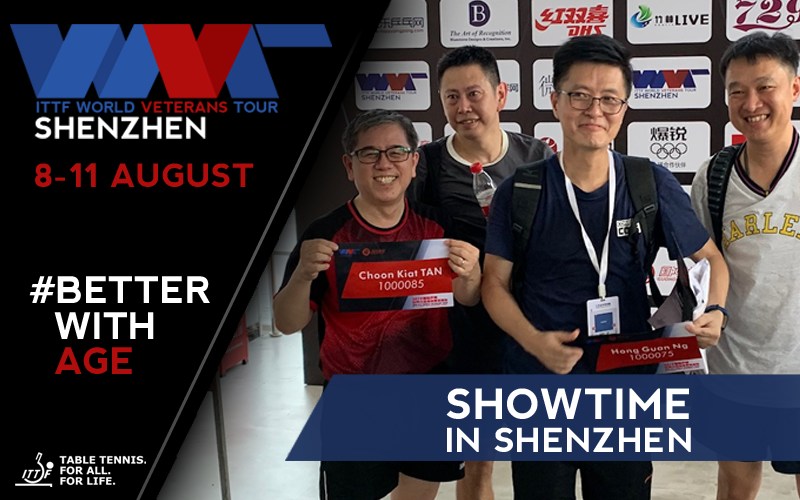 The first ever professionalised tour for the international veteran table tennis community is officially under way in Shenzhen (China) running from Thursday 8th – Sunday 11th August.

Over the next four days, the Honghuashan Sports Center in the Guangming District of Shenzhen will be a hive of activity, fun and mass participation, as 225 players from across the world get stuck into a jam-packed programme.

Australia, Brazil, Canada, China, Hong Kong, India, Indonesia, Italy, Korea, Japan, Macau, Malaysia, Singapore and the United States are all represented in what is set to be a vibrant festival of sport!

The #BetterWithAge tagline, which has engaged a growing participant pool on social media, stands to reason.

“I am very happy to be here. It is a rare opportunity for me to compete with other +80 year-olds. The final result does not matter. What matters is to meet new friends through table tennis.” Min Qiheng (above)

“This is my first time here in Shenzhen and I can feel how much China has developed and is making progress. Table tennis is a very good sport for older people. It is really good for our health.” Lily Yip, former USATT board member, vice president, Olympian & Olympic Coach.

There are two added ingredients which will jazz up proceedings in Shenzhen and beyond:

First of all, players will be battling it out for World Ranking points, adding extra spice to the competition! Click here to find out more.

It may be a little way off yet, but we also thought it would be fun to predict who could be taking part in the World Veterans Tour in 20 years’ time! Click here to find out who we think could be the leading candidates in 2039.

The final day of action, on Sunday 11th August, will be streamed live on itTV.

Meanwhile, stay up to date with all results from Shenzhen right here!