All struck gold in the women’s team events.

Zhou Ying, the class 4 winner and Zhang Bian, the class 5 champion, allied with Pan Jiamin in women’s team class 5 to secure gold; once again the Korea Republic, in the guise of Jung Younga, Kang Oejeong and Shin Mikyoung, had to settle for the silver medal.

Runners up spot for Korea Republic, in the one further title to be decided on the penultimate day of action it was gold; Kim Gitae, Son Byeongjin and Choi Hae Hyeon combined to emerge the men’s team class 11 champions. Second place finished in the hands of Japan’s Koya Kato, Takeshi Takemori and Takashi Asano.

Titles decided and in each instance it was success for the top seeds; a situation that very much applied in events still to be concluded, the favourites are very much on course.

Top seeds successful and China to the fore; it was the same situation in the men’s team events.

In class 3, Feng Panfeng, Zhai Xiang and Zhao Ping ended the day unbeaten, as in class 4 did Zhang Yan, Guo Xingyuan and Shi Yanping. Likewise, in class 5 Cao Ningning, Zhan Dashun and Liu Fu enjoyed successful ventures, a scenario that applied to Yan Shuo, Liao Keli and Huang Jiaxin in class 11, as well as in class 8 to Zhao Shuai, Ye Chao Qun and Peng Weinan. Meanwhile, not to be overshadowed, in class 9, it was a day without anxiety for Zhao Yi Qing and Han Yajie.

Imposing performances from China, it was the same in the men’s team event for the top seeded outfits from Korea Republic and Indonesia. In class 1-2, Korea Republic’s Cha Sooyong, Park Jincheol and Joo Youngdae concluded the day without defeat as in class 10 did Indonesia’s David Jacobs and Komet Akbar. 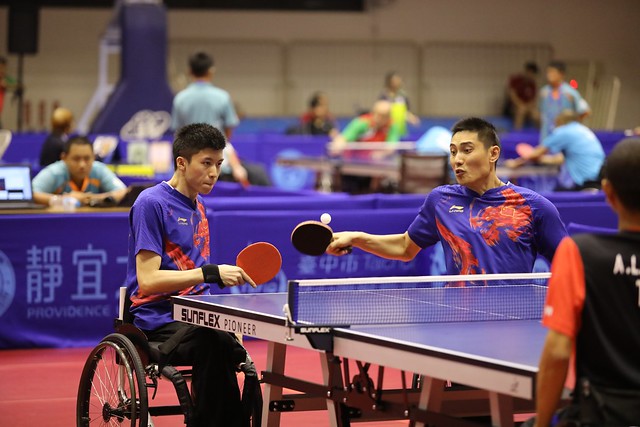