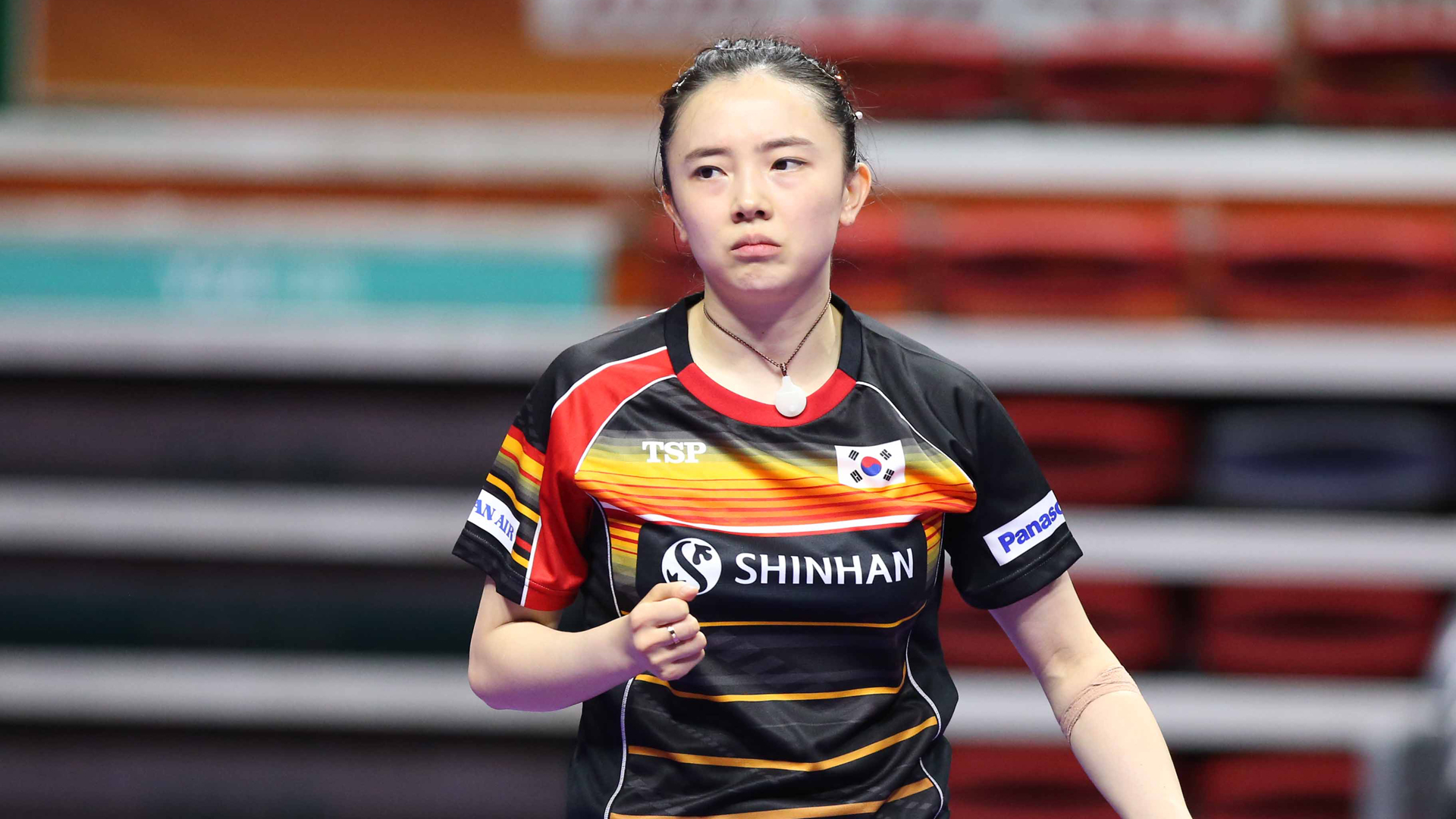 Defeat for Ito means the Japanese teenager has beaten Wang only once in nine head-to-head meetings on the international stage!

It’s the end of the road for Korea Republic’s Jeon Jihee and with it the end of the country’s hopes in the women’s singles event – Facing China’s Ding Ning at the quarterfinal hurdle, Jeon gave it her all but was simply outclassed by the ‘Queen of Hearts’ across four games (11-7, 11-8, 11-6, 11-3).

‘Cloud walker’ walks on through

Xu Xin ‘The Cloud Walker’ takes his spot in the penultimate round of the men’s singles category following a fine performance against Liang Jingkun.

In the season opener in Budapest, Xu Xin required the full match distance to see off his fellow countryman but this time out one game less was needed as the master of penhold prevailed by a 4-2 margin (11-6, 3-11, 11-3, 14-12, 5-11, 11-9). Next up for Xu Xin is a meeting with another Chinese player in Wang Chuqin for a place in the final.

Three-time World champion Ma Long has been put through his paces for the second consecutive round with Swedish counterpart Kristian Karlsson putting up an excellent fight.

“I expected the match to be difficult. After all it is a quarter-final match, which goes to show that Kristian Karlsson was also in good form. I just tried to play my best. I think winning this match allows me to prove to myself that I am doing well. Of course my opponent having his own unique style of play was something that I had to overcome on court. It just goes to show that more of our opponents are starting to analyse the players from the Chinese team. So for us to be behind – we are used to being in front for most matches – it is good that we are put through different situations. It is a learning experience.” Ma Long

Making the stronger start of the two, Karlsson raced into a surprise two games lead to put Ma on the back foot. However, Ma has shown on countless occasions in the past that he possesses nerves of steel and sure enough the Chinese star kept his cool against Karlsson, responding with four game wins in a row to advance to the last four (9-11, 9-11, 11-8, 11-3, 11-5, 11-8).

Victorious in the men’s doubles final, China has also secured gold in the women’s doubles draw with Chen Meng and Wang Manyu emerging as worthy winners.

Fan Zhendong and Xu Xin bounce back with title win

At the final hurdle the no.6 seeded pair displayed sheer excellence to defeat top seeds Jeoung Youngsik and Lee Sangsu by a 3-0 score-line (11-9, 11-7, 11-6), lifting their second trophy of the year as a partnership in the process having also won gold at the 2019 Japan Open in Sapporo.

Upset at the final frontier

Saturday morning has not been kind to the Chinese, as the #1 pairing of Xu Xin and Liu Shiwen lost the mixed doubles final to the Hong Kong pair Wong Chun Ting and Doo Hoi Kem.

The 2018 Grand final winners, Wong and Doo were at it from the start, leaving no stone unturned against the formidable Liu and Xu. Such intensity allowed for mistakes in the Chinese play, as Liu missed her top spin shots and slow returns in the match. Being one critical game up by the third, Wong and Doo took a strategic timeout to quell any hopes of a Chinese comeback. This meant the fourth game going to the wire, with the final point all about the forced error from Xu and Liu, and the Champions-feeling for Doo and Wong (11-9, 11-8, 6-11, 13-11).

Here’s what Jeoung Youngsik had to say following his impressive win against Fan Zhendong:

“I am so happy to have beaten Fan Zhendong, who is ranked among the best in the world. The most important moment in this victory was not the last game, but when I was behind 2-1. I managed to turn the table and make it 2-2. I have never seen any other match where the crowd had such enormous reactions. The cheers definitely gave me a lot of energy and it was an important contribution to the victory, so I want to thank them a lot for that.” Jeoung Youngsik

Zhendong becomes a Fan of Youngsik

The Korean crowd could not have roared louder as the home favorite Jeoung Youngsik overcame the World #3 Fan Zhendong in a match made to appeal to all sports fans alike.

“Actually I did have some chances in the match. I was leading 9-4 in the 4th game, but eventually lost, even though I was battling so hard to win it. Today the biggest problem came from my backhand, which is an obvious weakness, especially when we both played on our backhand.” Fan Zhendong

There was no shortage of drama as Youngsik lost two straight games after starting with a win, as the Chinese Zhendong sought to maintain his 100% record over the Korean. In what was probably the rally of the match, Youngsik levelled the playing field with an insane forehand shot to claim the fourth game. Following that, he went toe-to-toe with Zhendong and deservedly won himself a place in the last 4 of the 2019 Shinhan Korea Open, with his fans now including his opponent as well (11-5, 9-11, 8-11, 13-11, 11-9, 12-10).

If there is something certain about the Chinese players, it is the fact that they always do their homework. Up against his Youth Olympic Games rival, Wang Chuqin made sure the Japanese ‘Mozart’ Tamokazu Harimoto was never in stride.

Creating wide shots on the backhand for Harimoto, Wang was relentless in the first three games. With some advice from his coach, the Japanese youngster hinted at a comeback in the fourth and fifth games but did not last long as Wang saw himself to the semifinals with a win in 6 (11-8, 12-10, 11-7, 8-11, 5-11, 11-7).

Sun Yingsha back from the brink

The outcome was a reversal of last year when the tournament was staged in Daejeon; on that occasion Kasumi Ishikawa had prevailed when they met in the second round. However, since that date it has not been happy reading for Kasumi Ishikawa; early this year in both Doha and Sapporo she was beaten by Sun Yingsha in straight games. In Busan it was three in a row.

Recently elevated to the no.1 spot on the women’s world rankings, Chen Meng was brimful of confidence; she was far and away the more positive player, severe on the first three attacking strokes in the rallies. Equally in the department where Zhu Yuling excels; that of close to the table counter attacking consistency, she could not match Chen Meng. It was very much one way traffic, Chen Meng in the driving seat.

The players are out on court and ready to go – here’s what’s on the schedule for today: