Success one day earlier in the individual events, one day later on Tuesday 2nd July, in the men’s team competitions it was further success for four notable names at the 2019 Africa Para Championships in the Egyptian port city of Alexandria.

Nigeria’s Ahmed Koleosho, Tajudeen Agunbiade and Alabi Olufemi all added to their collection of honours as did the host nation’s Ahmed Sayed Moahmed.

Further success for Ahmed Koleosho, it was the same for Ahmed Sayed Moahmed; he partnered Abousteir Abdelmoniem to victory in class 6-8, the player he had beaten in the class 7 final. In a group organised competition, in the vital contest a 2-1 win was posted against Nigeria’s Victor Faniloye and Temitope Ogunsanya; notably in the men’s singles events, Victor Farniloye had won class 8.

Meanwhile, Moataz Ashour, President of the Egypt Table Tennis Federation was in a most positive mood at the close of proceedings; the success of the tournament being even more gratifying as it clashed with the major continental football event, the 32nd Africa Cup of Nations.

Not only did Egypt enjoy considerable success from a playing perspective, the national federation underlined its capacity to organise major international events.

“Egypt is a big country and is capable of hosting any forum, whether sports or political, as evidenced by the fact that we now host two continental championships and the African Paralympic Table Tennis Championship. Egypt has a sub-structure, hotels, clubs and stadiums to host these important sporting events.

Many of the players showed up with a high level of skill and especially for players from Egypt and Nigeria, who showed their class in the tournament.” Moataz Ashour 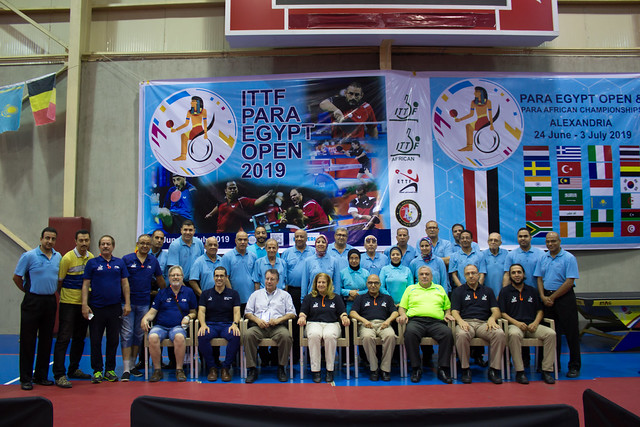