The ITTF World Tour is taking table tennis’ top players across Asia over the next three weeks at the China, Hong Kong and Japan Opens. Here is a breakdown of all the key info you need to know for one of the biggest months of the year! 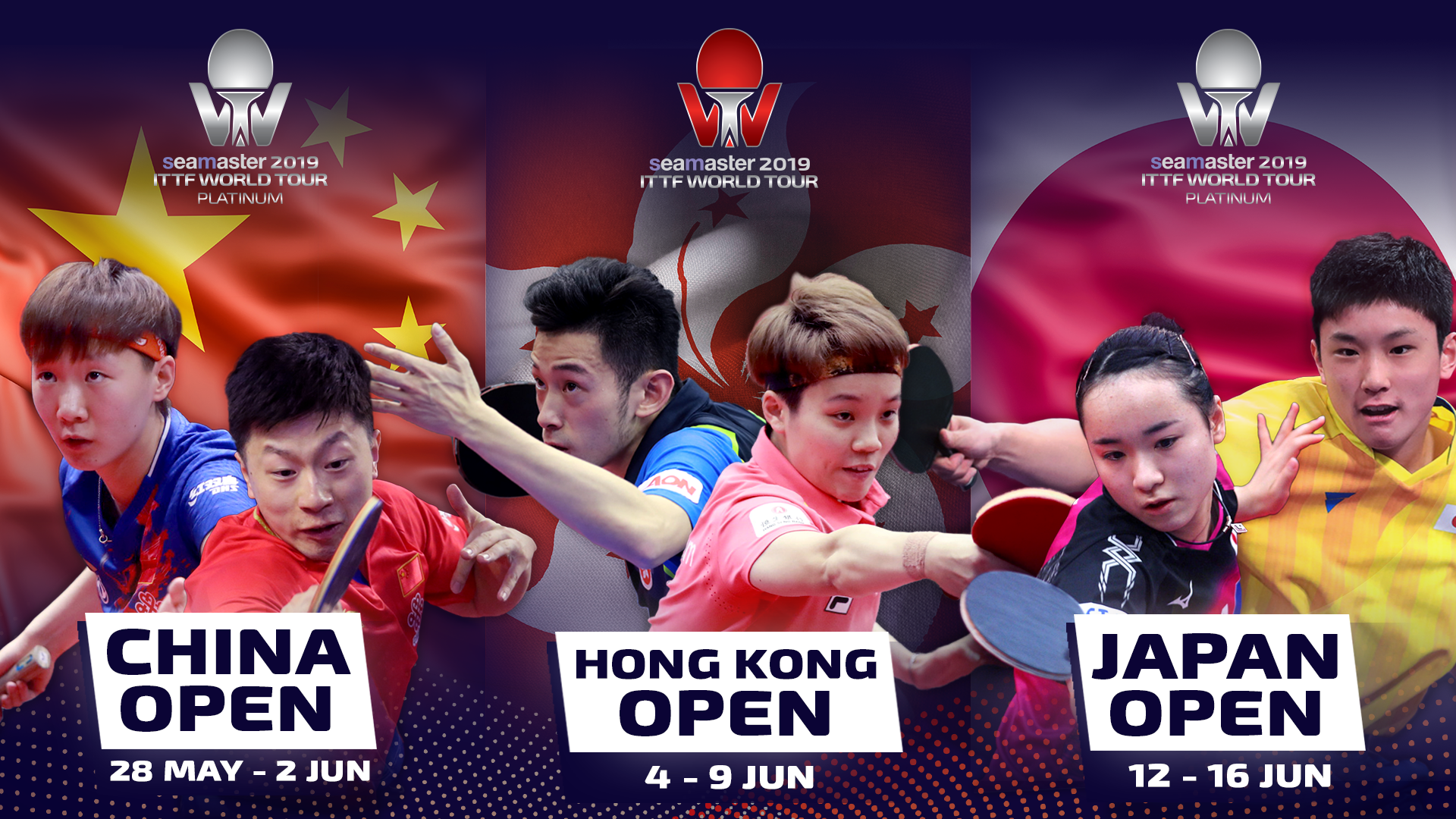 China and Japan are the only national associations to organise ITTF World Tour events since the concept was born in April 1996.

The 2019 China Open represents the 33rdedition of what is widely regarded as the most prestigious event on the ITTF World Tour, which counts a total of 12 events throughout the year. How could there be 33 editions between 1996 and 2019 you ask? That is because the China Open was held twice a year between 2004 and 2013 except for 2010.

Steeped in history and tradition, the China Open has also been a venue for new ideas with the 2018 edition marking the first ITTF World Tour event to feature the Mixed Doubles competition.

Also held every year since 1996, the Japan Open will be in its 24thedition when play kicks off in Sapporo this June. By contrast, the Hong Kong Open is the ‘baby’ of the ITTF World Tour, having been added to the circuit for the first time in 2018.

2. Stars on show in Shenzhen!

Boasting an entry list stronger than most World Championships and Olympic Games, the 2019 China Open will be showcasing quite literally the very best talent that international table tennis has to offer.

Of the top 50 Men’s Singles players on the planet, 46 are in Shenzhen to battle it out for glory, while all of the top 35 world-ranked names are present.

The fact that there are more titles (171) won by Men’s Singles participants at the China Open than the total number of entries (153) underlines the incredible calibre on show!

Liu will be looking to capitalise on her fine recent form, which saw her end a 10-year wait to clinch gold at the 2019 World Table Tennis Championships in Budapest, having finished runner-up at the most recent ITTF World Tour event: the Qatar Open in March. The question now is ‘can she go on to win her first China Open in a decade?’

More history in the making for Ma Long?

Three-time World Champion, reigning Olympic Champion and former Grand Slam winner, Ma Long (CHN) is also the name on everyone’s lips when it comes to the China Open, where he will be defending his crown.

‘The Dragon’ has already won a record seven Men’s Singles titles at his native ITTF World Tour event and, if he makes it eight times this week, he will set yet another record of 28 career ITTF World Tour triumphs!

The 30-year-old equalled Vladimir Samsonov’s benchmark of 27 titles at this year’s Qatar Open on his comeback from injury and he’s not looked back since, winning his third straight World Championships last month in Budapest.

Make sure you don’t miss potentially more history in the making for Ma Long, who would add further weight to the argument that he is the greatest male table tennis player of all time.

A notoriously tough event for players outside the host nation, there are only three non-Chinese names to have ever tasted success in the Singles competitions of the China Open:

Croatia’s Zoran Primorac (1997) and German duo, Timo Boll (2006) and Dimitrij Ovtcharov (2017), form that select group of players, while no player born outside China has ever lifted the Women’s Singles trophy.

Joining Boll and Ovtcharov as the other two Euroean seeds in Shenzhen are Liam Pitchford (ENG) and Mattias Falck (SWE). Interestingly, Pitchford was the last ever player to defeat Ma Long on the ITTF World Tour at the 2018 Bulgarian Open.

Meanwhile, Falck enters this event in the best form of his life having won a silver medal at the World Championships in Budapest exactly one month ago.

A couple of high-profile changes have been made in the Doubles game, as national associations appear to be testing different partnerships in the build-up to the Tokyo 2020 Olympic Games.

In the Mixed Doubles, the 2019 World Championships winning pair of Xu Xin and Liu Shiwen (CHN) will not be teaming up for any of the upcoming events, as Chen Meng replaces Liu at the China Open, while Zhu Yuling is set to join Xu in Japan.

Also in Shenzhen, Tomokazu Harimoto and Kasumi Ishikawa (JPN) are back together after the combination was broken up prior to the World Championships, where the latter had played alongside Maharu Yoshimura.

Meanwhile in the Men’s Doubles, the proven partnership of Mattias Falck and Kristian Karlsson (SWE) will not be on show in Shenzhen, as the former focuses on his Singles game, meaning that Karlsson is joined by Jon Persson.

Who will be the heroes in Hong Kong?

Kazuhiro Yoshimura (JPN) was an unlikely hero in the very first Hong Kong Open last year, emerging from the qualification rounds to win his debut Men’s Singles title on the ITTF World Tour.

Wang Manyu (CHN) picked up the Women’s Singles crown in what was a remarkable 2018 for the 20-year-old talent, while compatriots Chen Xingtong and Sun Yingsha (CHN) held their nerve to win Women’s Doubles gold.

The biggest cheers of that unforgettable inaugural event came for local heroes, Ho Kwan Kit and Wong Chun Ting (HKG) as they celebrated the Men’s Doubles title in front of their fans.

Who will be the stars this time around? Click here to see the entries.

Sandwiched between the China and Japan Opens, the Hong Kong Open is still being taken very seriously indeed by Japan’s star players, who look set to take the Queen Elizabeth Stadium by storm.

Tomokazu Harimoto (2nd seed), Koki Niwa (8th) and Jun Mizutani (9th) will have high hopes in the Men’s Singles competition, while it would almost be remarkable if Japan did not claim gold in the Women’s Singles, where Kasumi Ishikawa (1st), Mima Ito (2nd), Miu Hirano (4th), Saki Shibata (8th) and Hitomi Sato (9th) are all in the mix.

Masataka Morizono and Maharu Yoshimura will be gunning for glory in the Men’s Doubles, while Ishikawa and Hirano team up in the Women’s Doubles.

Rising stars in the Land of the Rising Sun

The story of last year’s Japan Open was dominated by the host nation’s most eye-catching talents, as Harimoto, then 14 years of age, defeated two World Champions, Ma Long in the quarters and Zhang Jike in the final, to claim Men’s Singles gold in breath-taking fashion.

Meanwhile, Mima Ito fought back from three games down to pull off a sensational semi-final comeback victory over Chen Xingtong before going on to beat Wang Manyu 4-2, her determined performances paying off to secure silverware and further boosting national pride and aspirations ahead of Tokyo 2020.

Those victories for Harimoto and Ito made them the first Japanese players in five years to win the Men’s and Women’s Singles titles on home soil.

For the upcoming 2019 Japan Open, Team China look very keen for a different outcome to last year, as they send a full-strength line-up to Sapporo, including the highest ranked male and female players in the world, Fan Zhendong and Ding Ning, both top seeds.

Harimoto (4th seed) is the only non-Chinese player to break into the top five seedings across the Men’s and Women’s Singles competitions, with Lin Gaoyuan, Xu Xin, Ma Long, Liang Jingkun, Chen Meng, Wang Manyu, Liu Shiwen and Zhu Yuling all due to battle it out in Japan.

Will they make amends one year on?

You won’t miss any of the action!

In addition to extensive coverage on internationally broadcast TV, you can watch live streaming of multiple tables at all three ITTF World Tour events on itTV!

An amazing month of elite international table tennis and gripping stories are coming your way! Enjoy the ride!