Japanese star, Mima Ito, wins the Women’s Singles final in straight games as Men’s World no. 1, Fan Zhendong, continues his red-hot form. The Seamaster 2018 ITTF World Tour Swedish Open concluded in some style for those to claim gold on Sunday in Stockholm.

Having pulled off a number of comeback wins earlier in the tournament, Mima Ito took her final match by storm, seeing off Women’s World no. 1, Zhu Yuling, with an emphatic 4-0 scoreline (11-3, 11-3, 11-5, 11-8) to claim her sixth career ITTF World Tour title.

Now ranked seventh in the world and sitting fourth in the World Tour standings, Mima Ito underlined yet again the threat she poses to China’s elite. After all, the 18-year-old arrived in Stockholm already boasting a glistening track record against top Chinese opposition, having beaten Liu Shiwen at the World Team Championships in Halmstad in May and seen off Chen Xingtong and Wang Manyu en route to Japan Open glory in June.

Needless to say, if she can keep up such impressive form, Mima Ito will be flying her country’s flag as a serious contender for the ultimate prize at Tokyo 2020.

Another tournament, another gold for Fan Zhendong

In doing so, Fan Zhendong reversed last year’s result between the same two finalists. Since that defeat, the 21-year-old has lost just once in Singles events on the international stage: against Ma Long at the Seamaster 2018 ITTF World Tour China Open in Shenzen. 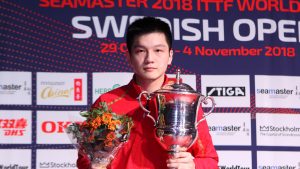 China dominate in the Doubles

All eyes on Austrian Open

The race to qualify for the World Tour Grand Finals in Incheon, Korea, will conclude with the Seamaster 2018 ITTF World Tour Platinum Liebherr Austrian Open in Linz, held between 8-11 November (qualifying between 6-7 November).