Staged from Wednesday 20th June to Sunday 1st July at the Centro de Atletismo 6º Centenario in Antequera, located in the south of the country and named as a European city of Sport, no less than 1,300 players competed in the recent 2018 Spanish National Championships

A total of 42 Butterfly tables were in action for a wide range of events that included both senior and junior competitions as well as Para events.

Seasoned internationals Carlos Machado and Galia Dvorak won the respective Men’s Singles and Women’s Singles events, the former for no less than the eleventh time, the latter for the sixth occasion.

Disappointment for Marc Duran but there was success; he partnered Oriol Monzo to Men’s Doubles gold, the pair beating Carlos Franco and Miguel Angel Vilchez at the final hurdle (11-8, 11-9, 11-9).

Similarly there was more than compensation for Sara Ramirez; she partnered Raquel Bonilla to the top prize in the Women’s Doubles competition. At the final hurdle the pair accounted for Claudia Caymel and Zhang Xuan (11-7, 4-11, 12-10, 11-9). 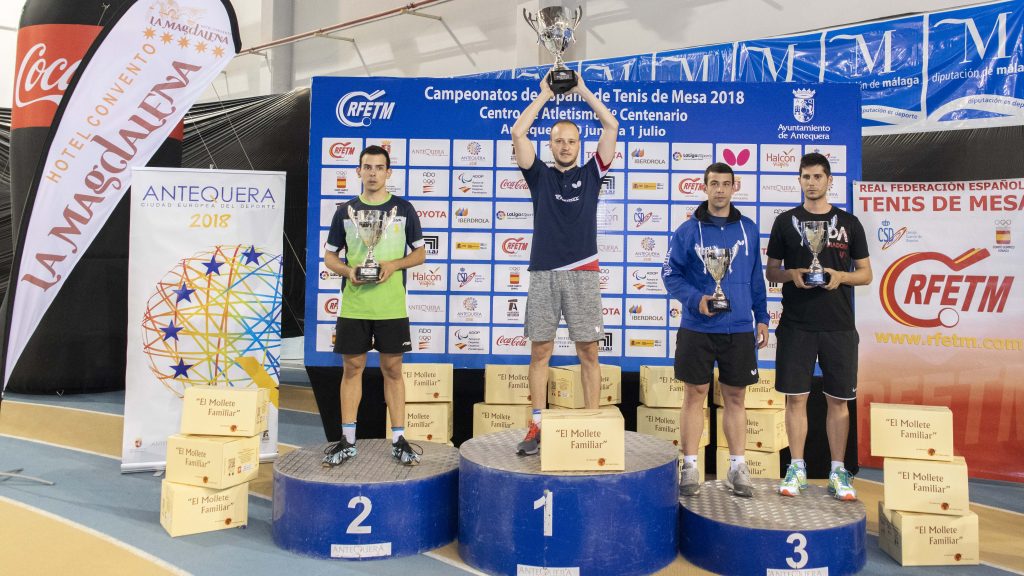 The podium in the Men’s Singles event (Photo: courtesy of the Royal Spanish Table Tennis Federation)