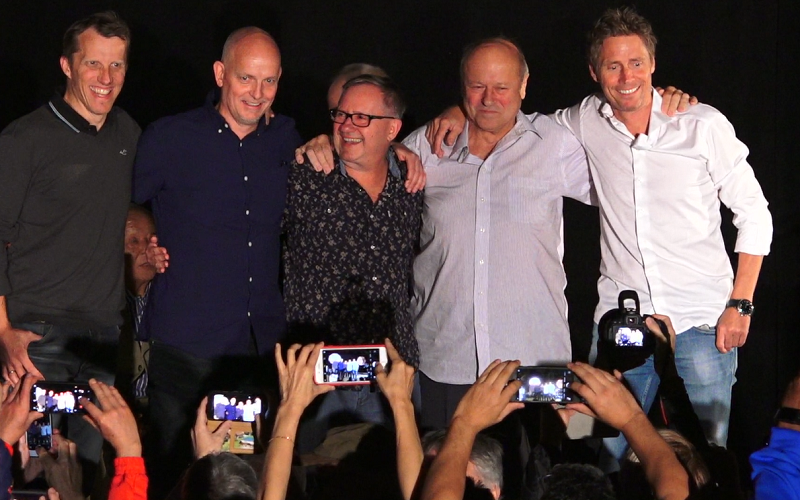 Indeed it was a taste of Vegas which was put on show, intertwined with special moments in table tennis history and the acknowledgement of the sport’s legends who had descended upon Las Vegas, USA, among approximately 4,000 competitors.

Indeed among the first two days of practice the scale of this momumental event has already been realized, and tonight’s ceremony ignites a thrilling week of table tennis across almost 300 tables and with a record number of countries participating.

The night was flavored with jazzy tones from Tim Kelly and his band as they wove complex tunes from keyboard, saxophone and drums. It was laced with the showmanship of Las Vegas, as the seating filled up and a unique table tennis themed magic performance was put on.

To add the spice of Vegas was a brilliant Michael Jackson impersonator who spilled energetic vibes into the hall.

Of course woven between these entertaining performances were some special table tennis moments, as USATT COO Mark Thompson gave an inspiring speech on friendship, unity and Ping Pong Diplomacy. He was joined on stage by members of the 1971 US Ping Pong Diplomacy Team – Errol Resek, Connie Sweeris, Judy Hoarfrost and George Braithewaite. The message was clear, across the record number of different national borders, from all corners of the globe, table tennis unified all.

ITTF CEO Steve Dainton and Seamaster’s Mr Frank Ji, who will playing in the Doubles event together, were also present on the evening, together with award designer Mr Richard Liu of Bluestone Designs.

During the celebration some exceptional grammy-like table tennis awards shimmered on a table on center stage, they were saved for a big finish.

As Danny Seemiller and David Sakai took the stage, it was time to recognize the legends of the sport present in Las Vegas. While memory lane was visited, the achievements of several key stars were showcased as they were brought to the stage. True champions of the sport were given the highest honors.

Danny Seemiller took the opportunity to give the audience some insight into those moments, interviewing the players on stage.

Proceedings ended with special appreciation shown for the contributions of Si and Patty Martinez Wasserman to US Table Tennis.

As the night came to a close, all attention shifts to tomorrow as one of the world’s biggest table tennis events begins. Thousands of players are gathered here in Las Vegas and tomorrow they will contest qualification groups, all with the goal of a main draw position.

Best of luck to all players and their supporters!