Japan’s Kazuhiro Yoshimura eventually prevailed in a contest he will never forget, a contest that reserved his place in the Men’s Singles final.

He emerged successful in what was arguably the most thrilling match of the tournament to date.

History favoured Lim Jonghoon; he had played Kazuhiro Yoshimura on three previous occasions and had prevailed each time. In Under 21 Men’s Singles events on the ITTF World Tour in both 2014 and 2017 he had emerged successful whilst also last year he had been victorious at the Universiade.

In Hong Kong there was nothing to choose between the two gladiators as the match ebbed and flowed.
At the end of the sixth game, Kazuhiro Yoshimura, stretching, mistimed a forehand topspin; one which he would not doubt have buried 99 times out of 100; a seventh game beckoned.

In the decider matters were level at 3-all; it was at that stage Kazuhiro Yoshimura appeared to take control. He won the next five points, only for Lim Jonghoon to recover and capture the next seven! At 10-8, Lim Jonghoon held two match points; incredibly he was not to win another point; the next four went to Kazuhiro Yoshimura who fell to the floor in a cacophony of ecstasy, exultation and exhaustion.

“I am extremely happy to win this match to get into the final. When I was leading 8-3 in the seventh game, I thought I would win; when Lim Jonghoon went ahead of 10-8, I seriously thought that I would lose. Now I’m going to rest well and hope to find my rhythm at the final.” Kazuhiro Yoshimura

It is the second time that Kasuhiro Yoshimura has reached a Men’s Singles final of an open international tournament; last year at the 2017 ITTF Challenge Belgium Open, he was beaten by India’s Sathiyan Gnanasekaran in the title decider. However, it is the first time he has progressed to an ITTF World Tour final in any discipline. 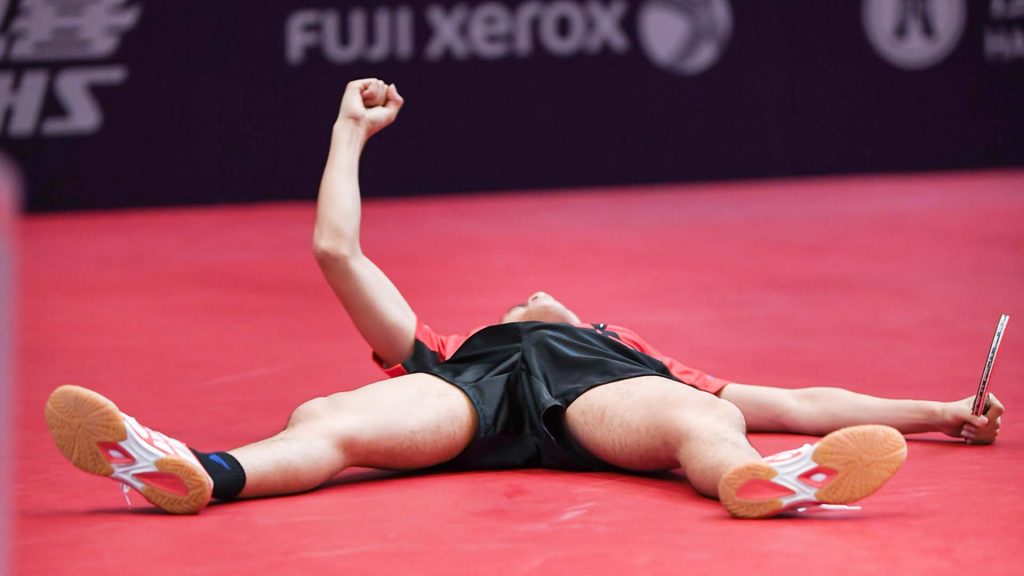 A quite sensational end to the day, the contest rather overshadowed the performance of Cho Seungmin against Zhou Qihao who, by emerging successful, reserved his place in his first ITTF World Tour or ITTF Challenge Series Men’s Singles final.

“I was quite nervous this match but at the same time enjoyed it very much. I’ve tried my best and I’m very happy. Before the match, I watched YouTube videos to study Zhou Qihao’s strategies. Next I will study my opponent through YouTube videos to prepare for the final.” Cho Seungmin

The final will be played on Sunday 27th May.