England Causes One of the Biggest Upsets in World Championships History

England has pulled off the one of the biggest upsets in table tennis history at the Liebherr 2018 World Team Table Tennis Championships today, 30 April 2018 in Halmstad, Sweden, to defeat Japan to take revenge for their bitter semi-finals loss at the 2016 World Team Championships in Kuala Lumpur. 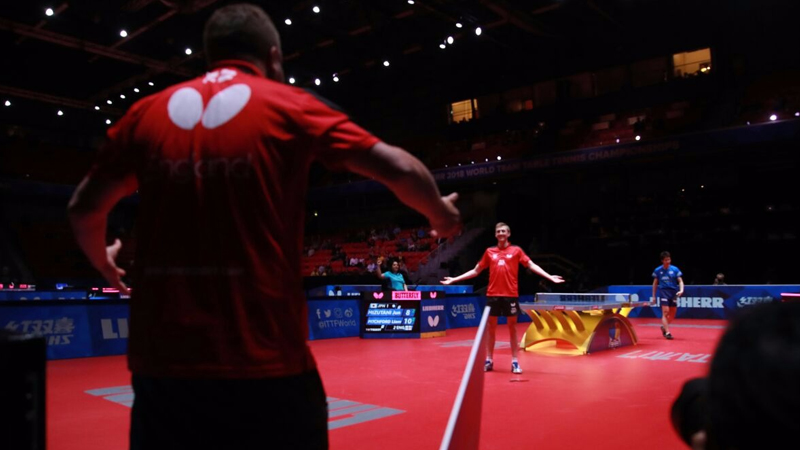 The English trio of Paul DRINKHALL, Liam PITCHFORD and Sam WALKER were on fire against the second seeded Japanese team in the Men’s Team Group Stage to secure a 3-1 victory to have a taste of sweet revenge.

World number 65 PITCHFORD was the hero of the night, beating both world number 13 Tomokazu HARIMOTO and Rio 2016 singles bronze medallist and world number 11 Jun MIZUTANI 3-0 and 3-1 respectively to lead the team to victory.

After winning the epic clash against MIZUTANI to seal the deal for his team, PITCHFORD shared “I’m over the moon and so happy for the team! This morning Paul had given us a great start against Chinese Taipei and today against Jun Mizutani he played really well, his performances today really gave me confidence before I played Tomokazu Harimoto. I beat him at the World Team Cup in February and today I just tried to impose my game on him.”

Japan now need to hope England loses a match and win all of theirs comfortably to have any chance of finishing top of group C to secure the direct passage to the quarter-final and to avoid the dreaded last 16 play off.

The Brazilian men’s team led by 2018 ITTF World Tour Qatar Open runner-up Hugo CALDERANO continued the upsets, by surprising Portugal 3-0 to be sitting second in group B behind the unbeaten China. The number one seeds Germany top group A after beating the locals Sweden 3-0 and Korea Republic have yet to lose a game to be in top spot in group D ahead of France.

In a rematch of the 2018 Commonwealth Games women’s team Final, the Singapore women’s team avenged their bitter loss to India, sweeping the Indian team 3-0 to remain unbeaten top of group A together with the number one seeds China with the teams set to battle tomorrow!

The Japanese women didn’t have the troubles of their men’s team, remaining unbeaten in group B. DPR Korea lead the way in group B and Hong Kong China and Korea Republic all tied up in group D.

The women’s round robin element finishes tomorrow and the men’s on the second. Check out the matches of the day here.

The 72 teams here in Halmstad are split into three divisions, with the top 24 teams in the Championship Division battling to become World Champion. The first stage of the event consists of the 24 teams being split into four groups of six teams. The top two team in the group progresses straight the quarter-final, while the second and third placed team having to play a knockout in the last 16 to make their way into the quarter-finals.