Checkout who took the titles on the final of action, Sunday 13th August, at the 2017 ITTF Challenge Seamaster Nigeria Open.

Egypt’s Omar Assar has taken the Men’s Singles title in Lagos after defeating India’s Sarthak Gandhi in the final 4-0(11-6, 13-11, 11-6, 11-8).  With the win Assar maintains his perfect record in Lagos, having now won the tournament on each occasion he has played.

“This competition is very special for me because it’s being hosted in Lagos, I need to play very well because many people are waiting for me to come here and that is why I won. I was here from day one.” Omar Assar

Gandhi can hold his head high, having navigated his way to the final all the from the qualification rounds. You can bet he will be finding himself directly in the main draw in no time at all.

Dina Meshref made sure Egypt doubled down on the titles, defeating Russia’s Olga Kulikova in the final of the Women’s Singles. It was a 4-0 (11-4, 16-14, 12-10, 11-6) victory for Meshref, who dropped only two games during the event. It was the Egyptian’s third attempt at the title, and it turned out to be third time’s lucky, having made the quarterfinal in 2014, and final in 2015. As Africa’s number one player, she kept continental pride and made sure the title stayed on home soil for the first time in the event’s history.

Europe made a strong showing in the doubles events on the final day of action in Lagos. Hungary’s Bernadett Balint and Szandra Pergel defeated Egypt’s Yousra Helmy and Dina Meshref to win the Women’s Doubles title, while the French duo of Antoine Hachard and Gregoire Jean took the Men’s Doubles title, defeating Romania’s Alexandru Cazacu and Rares Sipos. Both matches went according to script, with the No.1 seeds justifying their ranking and taking the titles. 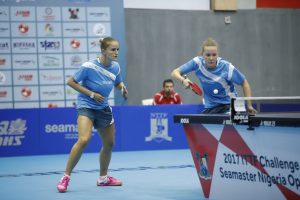 Father and son together but apart